The C-5, with its tremendous payload capability, provides the Air Mobility Command (AMC) inter theater airlift in support of United States national defense. The C-5 and the C-17 Globemaster III are partners in AMC's strategic airlift concept. The aircraft can carry fully equipped combat-ready military units (including main battle tanks) to any point in the world on short notice, then provide the field support required to help sustain the fighting force.

In 1961, several aircraft companies began studying heavy jet transport designs that would replace the C-133 transport and complement current C-141 Starlifters. The US Army wanted a larger transport than the C-141. In 1962, the Army rejected the proposed CX-4 transport, because it was not viewed as a significant advance over the C-141. By late 1963, the CX-X conceptual design had a gross weight of 550,000 lb, a maximum payload of 180,000 lb and a speed of Mach 0.75. The cargo compartment was 17.2 ft wide by 13.5 ft high and 100 ft long with front and rear access doors.

Requests for Proposal (RFPs) for the Heavy Logistics System (CX-HLS) (previously CX-X) went for bid in 1964. The CX-HLS was equipped with four engines, instead of six engines in the earlier CX-4 concept. Later in 1964, proposals for aircraft were received from Boeing, Douglas, General Dynamics, Lockheed, and Martin Marietta. Proposals for engines were received from General Electric, Curtiss-Wright Corporation, and Pratt & Whitney. In 1965 Lockheed's aircraft design and General Electric's engine design were selected for the new transport.[1]

The first C-5A Galaxy (number 66-8303) was "rolled out" on March 2, 1968. On June 30, 1968 Lockheed-Georgia Co. began flight testing its new Galaxy C-5A heavy transport with the aircraft's first flight taking to the air under the call-sign "eight-three O three heavy".

Upon completion of testing the first C-5A was transferred to the Transitional Training Unit at Altus Air Force Base, OK, in December 1969. Lockheed then delivered the first operational Galaxy to the 437th Airlift Wing, Charleston Air Force Base, SC, in June 1970.

The first C-5B incorporating significant improvements was delivered to Altus Air Force Base in January 1986. In April 1989, the last of 50 C-5B aircraft was added to the 77 C-5As in the Air Force's airlift force structure. The C-5B includes all C-5A improvements as well as more than 100 additional system modifications to improve reliability and maintainability. All C-5Bs are scheduled to remain in the active-duty force, shared by comparably sized and collocated Air Force Reserve associate units.

C-5s are stationed at Altus AFB, OK; Dover AFB, DE; and Travis AFB, CA. AMC transferred some C-5s to the Air Reserve components starting with Kelly AFB, Texas, in 1985; followed by Stewart Air National Guard Base, NY; and Westover Air Reserve Base, Massachusetts. Beginning in October 2005 squadrons were formed at Wright-Patterson Air Force Base near Dayton, Ohio, the Tennessee Air National Guard at Memphis International Airport, TN and Martinsburg WV (WV ANG) in December 2006. The Wright-Patterson C-5s replace the squadron's C-141s, which were the last Starlifters to be retired. In December of 2006, the 167th Airlift Wing of the West Virginia Air National Guard in Martinsburg (WV) received the first of 10 C-5A aircraft slated for the base. 70-0459 was the first Aircraft to go to Martinsburg. Memphis received 70-0449 as thier first aircraft in October 2003, while Wright Patterson received 70-0457 from Travis in October 05.

Dover AFB is the first base to have their fleet completed with the AMP. Dover will draw down the remaining legacy aircraft in mid 2007 to Westover ARB, MA. Dover will maintain 15 B models, and will gain 3 C-5M models sometime in early 2008. RERP production is slated to begin in May of 2008. 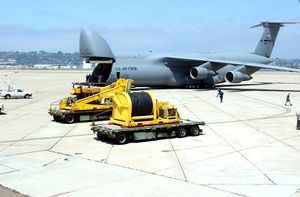 The forward section of the C-5 Galaxy lifts open to allow loading of bulky items such as the Super Scorpio robotic rescue vehicles.

The C-5 is a large high-wing cargo aircraft. It has a distinctive high T-tail, 25 degree wing sweep, and four TF39 turbofan engines mounted on pylons beneath the wings. The C-5 is similar in appearance to its smaller sister transport, the C-141 Starlifter. The C-5 has 12 internal wing tanks and is equipped for aerial refueling. With aerial refueling, the Galaxy's range is limited only by crew endurance. It has both nose and aft doors for "drive-though" loading and unloading of cargo.

Features of the C-5 include:

The Galaxy is capable of carrying nearly all of the Army's combat equipment, including bulky items such as the 74 ton armored vehicle launched bridge (AVLB), from the United States to any location on the globe. 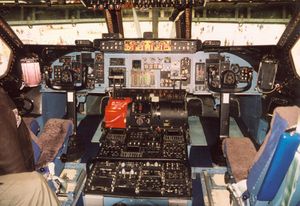 Instrument panel of a C-5A.

The C-5A is the original version of the C-5. From 1969 to 1973, 81 C-5As were delivered to US Air Forces bases. Due to cracks found in the wings in the mid-1970s, the cargo weight was restricted. To restore the plane's full capability, the wing structure was redesigned. A program to install new strengtened wings on 77 C-5As was conducted from 1981 to 1987. The redesigned wing made use of a new aluminum alloy that didn't exist during the original production.

The C-5B is an improved version of the C-5A. It incorporated all modifications and improvements made to the C-5A with improved wings, upgraded TF-39-GE-1C turbofan engines and updated avionics. From 1986 to 1989, 50 of the new variant were delivered to the US Air Force.

The C-5C is a specially modified variant for transporting large cargo. Two C-5s (68-0213 and 68-0216) were modified to have a larger internal cargo capacity, such as the removal of the troop compartment, to accommodate large payloads, such as satellites for use by NASA. A number of other modifications were made, including adding a second inlet for ground power which can then be used to feed any power-dependent equipment which may form part of the cargo. The two C-5Cs are operated by US Air Force crews on the behalf of NASA, and are stationed at Travis AFB, CA. 68-0216 completed the Avionics Modernization Program in January 2007. 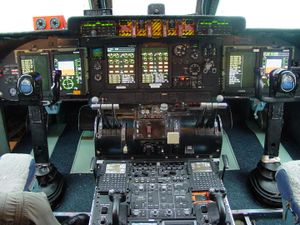 New instrument panel of a C-5M.

Based on a recent study showing 80% of the C-5 airframe service life remaining, AMC began an aggressive program to modernize all remaining C-5Bs and C-5Cs and many of the C-5As. The C-5 Avionics Modernization Program (AMP) began in 1998 and includes upgrading avionics to Global Air Traffic Management compliance, improving communications, new flat panel displays, improving navigation and safety equipment, and installing a new autopilot system. Another part of the plan is a comprehensive Reliability Enhancement and Re-engining Program (RERP), which includes new General Electric CF6-80C2 engines, pylons and auxiliary power units, with upgrades to aircraft skin and frame, landing gear, cockpit and the pressurization system. The CF6 engine produces 22% more thrust (for a total of 54,000 lb from each engine) than existing C-5 engines which will result in a 30% shorter take-off roll, a 38% higher climb rate to initial altitude, a significantly increased cargo load, and a longer range between refueling.[2] The C-5s that complete these upgrades are designated C-5M Super Galaxy.[3]

The C-5 modernization AMP and RERP programs plans to raise mission-capable rate to a minimum goal of 75%. Over the next 40 years, the U.S. Air Force estimates the C-5M will save over US$20 billion. The first of 111 planned C-5M conversions was completed on May 16, 2006, and performed its first flight on June 19.

There have been four C-5 Galaxy crashes in the history of the plane along with two class-A losses resulting from ground fires and one loss resulting from damage sustained on the ground. 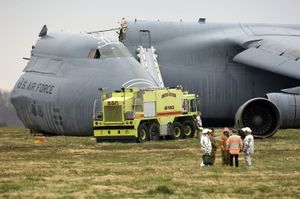 Emergency responders at the scene of a C-5 Galaxy crash at Dover Air Force Base, Del., 3 April, 2006 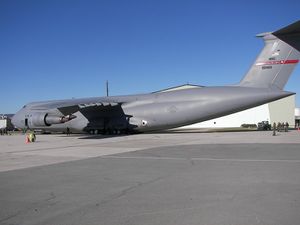 Unlike its Russian counterpart, the civilian- and military-operated Antonov An-124 'Condor' or An-225 "Mriya", use of the C-5 is confined entirely to the military sector. 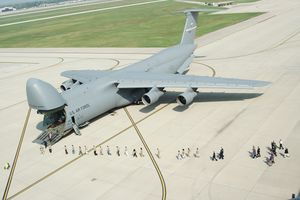 Data from Quest for Performance[6] 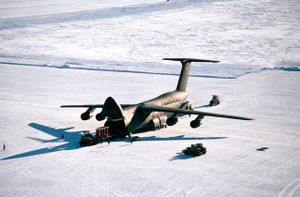 A C-5 Galaxy at Williams Field, Antarctica in 1990