The Lockheed Corporation (originally Loughead Aircraft Manufacturing Company) was an American aerospace company founded in 1912 which merged with Martin Marietta in 1995 to form Lockheed Martin.

The Alco Hydro-Aeroplane Company was established in 1912 by the brothers Allan and Malcolm Loughead. This company was renamed the Loughead Aircraft Manufacturing Company and located in Santa Barbara, California.

In 1926, following the failure of Loughead, Allan Lougheed formed the Lockheed Aircraft Company (the spelling was changed to match its phonetic pronunciation) in Hollywood, California. In 1929 Lockheed sold out to Detroit Aircraft Corporation.

The Great Depression ruined the aircraft market, and Detroit Aircraft went bankrupt. A group of investors headed by brothers Robert and Courtland Gross, and including Walter Varney bought the company out of receivership in 1932. The syndicate bought the company for a mere $40,000. Ironically, Allan Loughead himself had planned to bid for his own company, but had raised "only" $50,000, which he felt was too small a sum for a serious bid.

In 1934, Robert E. Gross was named chairman of the new company, the Lockheed Corporation, which was headquartered at the airport in Burbank, California. The company remained there for many years before moving to Calabasas, California.[citation needed]

The first successful construction that was built in any number (141 aircraft) was the Vega, best known for its use to several first- and record setting flights by, amongst others, Amelia Earhart, Wiley Post and George Hubert Wilkins

In the 1930s, Lockheed spent $139,400 to develop the L-10 Electra, a small twin-engine transport. The company sold 40 in the first year of production. Amelia Earheart and her navigator, Fred Noonan, flew this plane on their failed attempt to circumnavigate the world in 1937. The Electra also formed the basis for the Hudson bomber, which was supplied to both the British Royal Air Force and the United States military before and during World War II. Its primary role was submarine hunting.

At the beginning of World War II, Lockheed — under the guidance of Clarence (Kelly) Johnson, one of the best known American aircraft designers — answered a specification for an interceptor by submitting the P-38 Lightning fighter plane, a somewhat unorthodox twin-engine, twin-boom design. The P-38 was the only U.S. fighter design to be built for the entire duration of the war. It filled ground attack, air-to-air, and even strategic bombing roles in all theatres of the war. The P-38 was responsible for shooting down more Japanese aircraft than any other type during the war; it also participated in the famous mission to kill Japanese Admiral Isoroku Yamamoto, the mastermind of the Pearl Harbor attack. Also under Johnson, Lockheed developed a larger, less-successful version of the P-38.

File:049-connie-gov.jpg
The Lockheed Constellation was developed during World War II and served as both a civilian airliner and a military transport.

During World War II, Lockheed, in cooperation with Trans-World Airlines (TWA), had developed the L049 Constellation, a radical new airliner capable of flying 43 passengers between New York and London at a speed of 300 mph in 13 hours. Once the Constellation (affectionately called "Connie") went into the production, the military received the first production models. After the war, the airlines received their original orders of Constellations. This gave Lockheed more than a year's head-start over other aircraft manufacturers in what was easily foreseen as the post-war modernisation of civilian air travel. The Constellations performance set new standards which did in fact transform the civilian transportation market, but its signature tri-tail was the result of many of their initial customers not having hangars tall enough for a more conventional tail.

Lockheed produced a larger transport, the double-decked R6V Constitution, which was intended to make the Constellation obsolete. However, the design proved underpowered, and only two prototypes were ever built.

File:Usaf.u2.750pix.jpg
The Lockheed U-2, which first flew in 1955, provided much needed intelligence on Soviet bloc countries. 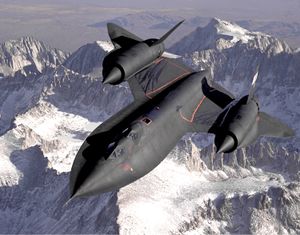 In 1943, Lockheed began, in secrecy, development of a new jet fighter at its Burbank facility. This fighter, the P-80 Shooting Star, became the first American jet fighter to score a kill. It also recorded the first jet-to-jet aerial kill, downing a MiG-15 in Korea, although by this time the F-80 (as it came to be known in June 1948) was already considered obsolete.[2]

Starting with the P-80, Lockheed's secret development work was conducted by its Advanced Development Division, more commonly known as the Skunk Works. This organization has become famous and has spawned many successful Lockheed designs, including the U-2 (late 1950s), SR-71 Blackbird (1962) and F-117 Nighthawk stealth fighter (1970s). The Skunk Works often created high quality designs in a short time and sometimes with limited resources. Today the generic term "skunk works" implies a place for the development of secret projects.

Projects during the Cold War

In 1954, the C-130 Hercules, a durable four-engined transport, flew for the first time. The type remains in production in 2007.

In 1956, Lockheed received a contract for the development of the Polaris Submarine Launched Ballistic Missile (SLBM), this would be followed by the Poseidon and Trident nuclear missiles.

During the 1960s, Lockheed began development for two large aircraft: the C-5 Galaxy military transport and the L-1011 TriStar wide-body civil airliner. Both projects encountered delays and cost overruns. The C-5 was built to unclear initial requirements and suffered from structural weaknesses, which Lockheed was forced to correct with its own money. The Tristar competed for the same market as the Douglas DC-10; delays in Rolls-Royce engine development caused the Tristar to fall behind the DC-10. Both the C-5 and L-1011 projects caused Lockheed to lose money during the 1970s.

The Lockheed bribery scandals encompassed a series of illegal bribes and contributions made by Lockheed officials from the late 1950s to the 1970s. In late 1975 and early 1976, a sub-committee of the U.S. Senate led by Senator Frank Church concluded that members of the Lockheed board had paid members of friendly governments to guarantee contracts for military aircraft[3]. In 1976, it was publicly revealed that Lockheed had paid $22 million in bribes to foreign officials[4] in the process of negotiating the sale of aircraft including the F-104 Starfighter, the so-called "Deal of the Century".

The scandal caused considerable political controversy in West Germany, the Netherlands and Japan. In the U.S. the scandal nearly led to the ailing corporation's downfall, as it was already struggling due to the commercial failure of the L-1011 airliner.

Lockheed's operations are divided between several groups and divisions, many of which continue to operate within Lockheed Martin.[6]

A partial listing of aircraft and other vehicles produced by Lockheed.