The Lockheed Ventura was a bomber and patrol aircraft of World War II, used by United States and British Commonwealth forces in several guises. It was developed from the Lockheed Lodestar transport, as a replacement for the Lockheed Hudson bombers then in service with the Royal Air Force. The RAF ordered 675 Venturas in February 1940. They were delivered from mid-1942 onwards.

The Ventura was very similar to its predecessor, the Hudson. The primary difference was not in layout; rather, the Ventura was larger and heavier than the Hudson. Venturas were initially used for daylight raids on occupied Europe. They proved unsuited to this task, because (like many other bombers used by the RAF), they were too vulnerable with no long-range fighter escorts, being replaced in this role by the de Havilland Mosquito. The Venturas were gradually transferred to patrol duties with Coastal Command.

In 1941 August, large orders for Venturas were placed with Lend-Lease Act money. Among the orders were for 550 armed reconnaissance versions of the Ventura. This plane was originally planned to be built under the designation O-56. The main differences between the Ventura and the O-56 were in the engines: rather than the 2,000 hp (1,490 kW) Pratt and Whitney R-2800 radials of the Ventura, the O-56 used 1,700 hp (1,270 kW) Wright R-2600-13 radials.

While 550 were ordered by the Army Air Force, acquisition by the USAAF stopped after only 18 were accepted, when the Army Air Force agreed to turn over exclusive use of the Ventura to the United States Navy (see Naval Service below). 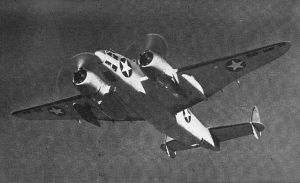 The PV-1 Ventura, built by the Vega Aircraft Company division of Lockheed (hence the 'V' Navy manufacturer's letter that later replaced the 'O' for Lockheed), was a version of the Ventura built for the U.S. Navy (see Venturas in U.S. Navy service below). The main differences between the PV-1 and the B-34 were the inclusion of special equipment in the PV-1, adapting it to its patrol-bombing role. The maximum fuel capacity of the PV-1 was increased from 1345 gal to 1607 gal, to increase its range; the forward defensive armament was also reduced for this reason. The most important addition was of an ASD-1 search radar.

The PV-1 began to be delivered in 1942 December, and entered service in 1943 February. The first squadron in combat was VP-135, deployed in the Aleutian Islands in 1943 April. They were operated by three other squadrons in this theatre. From the Aleutians, they flew strikes against bases in Paramushiro and Shimushu, Japanese islands in the Kurile chain. Often, PV-1s would lead B-24 bomber formations, since they were equipped with radar. In late 1943, some PV-1s were deployed to the Solomon Islands as night-fighters.

The PV-2 Harpoon was a major redesign of the Ventura with the wing area increased from 551 ft² (51.2 m²) to 686 ft² (63.7 m²) giving an increased load-carrying capability. The motivation for redesign was weaknesses in the PV-1, since it had shown to have poor-quality takeoffs when carrying a full load of fuel. On the PV-2, the armament became standardised at five forward-firing machine guns. Many early PV-1s had a bombardier's position, which was deleted in the PV-2. Some other significant developments included the increase of the bombload by 30% to 4,000 lb (1,800 kg). Another development was the ability to carry eight 5 in (127 mm) HVAR rockets under the wings.

While the PV-2 was expected to have increased range and better takeoff, the anticipated speed statistics were projected lower than those of the PV-1, due to the use of the same engines but an increase in weight. The Navy ordered 500 examples, designating them with the popular name Harpoon.

Early tests indicated a tendency for the wings to wrinkle dangerously. As this problem could not be solved by a 6 ft (1.8 m) reduction in wingspan (making the wing uniformly flexible), a complete redesign of the wing was necessitated. This hurdle delayed entry of the PV-2 into service. The PV-2s already delivered were used for training purposes under the designation PV-2C. By the end of 1944, only 69 PV-2s had been delivered. They finally resumed when the redesign was complete. The first aircraft shipped were the PV-2D, which had 8 forward-firing machine guns and was used in ground attacks. When World War II ended, all of the order was cancelled.

With the wing problems fixed, the PV-2 proved reliable, and eventually popular. It was first used in the Aleutians by VP-139, one of the squadrons that originally used the PV-1. It was used by a number of countries after the war’s end, but the United States ceased ordering new PV-2s, and they were all soon retired from service.

387 PV-1s were used by the RAF as the Ventura G.R.V. They were used in the Mediterranean and by the Coastal Command. Some RAF aircraft were modified into Ventura C.V transport aircraft. The Ventura Mark I was first delivered to the Royal Air Force in 1941 September, and flew its first combat mission on 1942 November 3, against a factory in Hengelo, the Netherlands. On December 6 1942, 47 Venturas engaged in a daylight, low-altitude attack against Eindhoven, also in the Netherlands. This was the primary event that demonstrated the Ventura's weakness in such raids: of the 47, nine of the bombers were downed. Following this tragedy, tactics were switched to medium-altitude raids. The Ventura faired little better in this strategy. During one attack on a power station in Amsterdam on May 3 1943, New Zealand's 487 Squadron were told the target was of such importance attack was to be continued regardless of opposition. All ten Venturas to cross the coast were lost to German fighters. Squadron Leader Leonard Trent, (later the last of the Great Escapers), won the Victoria Cross for his leadership in this raid.

It was never a very popular plane among RAF crews, and despite the fact that it was 50 mph (80 km/h) faster and carried more than twice as many bombs as its predecessor, the Hudson, it proved ill-suited to its task as a bomber. By the summer of 1943, the Ventura had been phased out of service in favour of the de Havilland Mosquito. Its last mission was flown by No. 21 Squadron RAF on September 9 1943. After leaving bombardment service, a number were modified to be use by the Coastal Command; they served as the Ventura G.R.I.

A small number of Venturas were also used in other countries, including Canada the Royal New Zealand Air Force and South Africa.

55 PV-1s were used by the RAAF in the South West Pacific Area, serving primarily in New Guinea. Initially, air crews and ground staff disliked the Ventura, preferring the B-25 Mitchell. But in many cases, the PV-1 had developed a grudging respect from its operators.

Venturas were in use by the RCAF from 16 June, 1942 to 18 April, 1947 in the home defence coastal patrol role in both Eastern and Western Air Command. They were flown by 8, 113, 115, 145, and 149 Squadrons, as well as by 1 Central Flying School, Trenton, Ontario, and at Pennfield Ridge, New Brunswick (RAF No. 34 Operational Training Unit) . They were also flown at RCAF Station Yarmouth in World War II.

From August 1942 No. 487 Squadron RNZAF, (operating in Europe as part of the Royal Air Force), was equipped with the type, although losses (including on 3 May 1943 the loss of all 11 aircraft attacking Amsterdam), lead to their replacement with the de Havilland Mosquito in June. The Royal New Zealand Air Force in the Pacific received 139 Venturas and some Harpoons from June 1943 to replace Lockheed Hudsons in the maritime patrol bomber and medium bomber roles. Initially Venturas were unpopular with the RNZAF, due to rumoured poor performance on one engine, and the fate of Leonard TrentV.C.'s 487 Squadron, as well as the failure of the U.S. to provide New Zealand with promised B-24 Liberators. Despite this, the RNZAF Venturas came to be amongst the most widely used of any nations, seeing substantial action until VJ day over South West Pacific islands.

The first 19 RB34s arrived by sea from the U.S. in June had much equipment either missing or damaged. 6 airworthy machines were hurriedly produced by cannabilisation and sent into action with No. 3 Squadron RNZAF in Fiji. On June 26 the first PV.1s were flown to Whenuapai and No. 1 Squadron RNZAF was able to convert to 18 of these by 1 August, replacing the mixed 3 squadron in action at Henderson Field, Guadacanal in late October. By this time No. 2 Squadron RNZAF at Ohakea and No. 9 squadron RNZAF were also using the type. The following year No. 4 Squadron RNZAF and No. 8 Squadron RNZAF also received Venturas. Some squadrons were retained on 'garrison' duty, while others followed the allied advance to Emirau and Green Island and New Britain. RNZAF Venturas were tasked with routine patrols, anti shipping strikes, minelaying, bombing and strafing missions, air sea rescue patrols, photographic reconnaissance, and in an apparently bizarre case of taking Lockheed marketing's slogan of "The Fighter-Bomber" too literally, even (briefly) fighter sweeps.

RNZAF machines did often clash with Japanese fighters, notably during an air-sea rescue patrol on Christmas Eve 1943, NZ4509 was attacked by nine Japanese single engined fighters over St.George's Channel. It shot down three later confirmed and claimed two others as probables, although being heavily damaged in the action. The pilot, Flying officer D Ayson and navigator Warrant Officer W Williams were awarded the DFC, the dorsal turret gunner Flight Sergeant G. Hannah was awarded the DFM.

By late 1944 the Ventura began to be phased out of frontline action, as the RNZAF backed away from the Patrol bomber concept, orders for PV 2 Harpoons being cancelled after a handful or aircraft had been delivered. At V.J. Day, only 30 PV-1 s remained on the front line with 3 Squadron at Jacquinot Bay.

Planned re-equipment with Mosquitoes did not take place until after the cessation of hostilities. 2 Squadron was the last Ventura unit, continuing to operate PV1s and 2s on meteorological duty until 1948. A restored RNZAF RB34 (NZ4600) is owned by the Museum of Transport and Technology in Auckland.

During the early months of 1942, the primary responsibility for anti-submarine warfare in the United States was shouldered by the Army Air Force. This irked the Navy, as it considered this region of battle its burden. To carry out such a task, the Navy was pursuing a long-range, land-based patrol and reconnaissance aircraft with a substantial bombload. This goal was always resisted by the Army Air Force, which carefully protected its monopoly on land-based bombing. This forced the navy to use long-range floatplanes for these roles. The Navy was unable to upgrade to better planes until the Army Air Force needed the Navy plant in Renton, Washington to manufacture its B-29 Superfortress. In exchange for use of the Renton plant, the Army Air Force would discontinue its objections to Naval land-based bombers, and provide planes to the Navy. One of the clauses of this agreement stated that production of the B-34 and B-37 by Lockheed would cease, and instead these resources would be directed at building a navalised version, the PV-1 Ventura.

The PV-1 began to be delivered in 1942 December, and entered service in 1943 February. The first squadron in combat was VP-135, deployed in the Aleutian Islands in 1943 April. They were operated by three other squadrons in this theatre. From the Aleutians, they flew strikes against Paramushiro, a Japanese island. Often, PV-1s would lead B-24 bomber formations, since they were equipped with radar. In late 1943, some PV-1s were deployed to the Solomon Islands.

After the war the US Navy deemed many PV-1's as obsolete and the aircraft were sent to Naval Air Station Clinton, OK to be demilitarized and reduced to scrap.