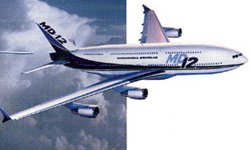 The proposed MD-12 was a full double-decker configuration concept.

The McDonnell Douglas MD-12 was a design study undertaken by the McDonnell Douglas company in the 1990s, though it should be noted that this study was a revival of an earlier Douglas study of the 1960s for a double-decker widebody, reprinted in Air International in 2001. Initially it was to be a stretched, higher capacity version of the trijet MD-11. The design then grew into a much larger aircraft with 4 engines and two passenger decks extending the length of the fuselage, and was announced in April 1992. This was similar in concept to the future Airbus A380 and Boeing NLA, and would have been larger than the Boeing 747. Despite aggressive marketing, especially in the aviation press, no orders were placed for the aircraft, and it was quietly forgotten after the 1997 merger between McDonnell Douglas and Boeing. 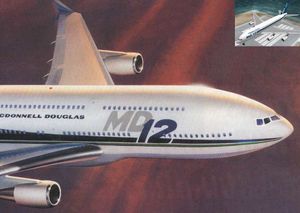