The Lockheed C-130 Hercules is a four-engine turboprop cargo aircraft and the main tactical airlifter for many military forces worldwide. Over 40 models and variants of the Hercules serve with more than 50 nations. In December 2006 the C-130 became the fourth aircraft (after the English Electric Canberra in May 2001, B-52 Stratofortress in January 2005 and the Tupolev Tu-95 in January 2006) to mark 50 years of continuous use with its original primary customer (in this case the United States Air Force).

Capable of short takeoffs and landings from unprepared runways, the C-130 was originally designed as a troop, medical evacuation and cargo transport aircraft. The versatile airframe has found uses in a variety of other roles, including as a gunship, and for airborne assault, search and rescue, scientific research support, weather reconnaissance, aerial refuelling and aerial firefighting. The Hercules family has the longest continuous production run of any military aircraft in history. During more than 50 years of service the family has participated in military, civilian and humanitarian aid operations. 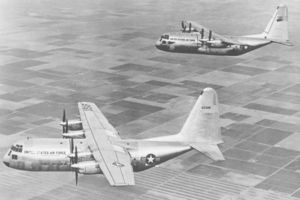 The two YC-130 prototypes; the blunt nose was replaced with radar on later production models.

The Korean War, which began in June, 1950, showed that World War II-era transports—C-119 Flying Boxcars, C-47 Skytrains and C-46 Commandos—were inadequate for modern warfare. Thus, on February 2, 1951, the United States Air Force issued a General Operating Requirement (GOR) for a new transport to Boeing, Douglas, Fairchild, Lockheed, Martin Company, Chase Aircraft, Airlifts Inc, North American and Northrop. The new transport would have a capacity for 92 passengers or 64 paratroopers, a range of Template:Convert, takeoff capability from short and unprepared strips, and the ability to fly with one engine stopped.

Fairchild, North American, Martin and Northrop declined to participate. The remaining five companies tendered a total of nine designs: Lockheed two, Boeing one, Chase three, Douglas three, Airlifts Inc one. The contest was a close affair between the lighter of the two Lockheed (preliminary project designation L-206) proposals and a four-turboprop Douglas design. The Lockheed design team was led by Willis Hawkins starting with a 130 page proposal for the Lockheed L-206 and another two-turboprop and heavier one.[3] Hall Hibbard, Lockheed vice president and chief engineer, saw the proposal and directed it to Kelly Johnson, who remarked when he saw the proposal, "If you sign that letter, you will destroy the Lockheed Company."Template:Unclear Both Hibbard and Johnson signed the proposal and the company won the contract for the now-designated Model 82 on July 2, 1951.[4]

The first flight of the YC-130 prototype was made on August 23, 1954 from the Lockheed plant in Burbank, California. The aircraft, serial number 53-3397, was the second prototype but the first of the two to fly. The YC-130 was piloted by Stanley Beltz and Roy Wimmer on its 61-minute flight to Edwards Air Force Base; Jack Real and Dick Stanton served as flight engineers. Kelly Johnson flew chase in a P2V Neptune.[5] 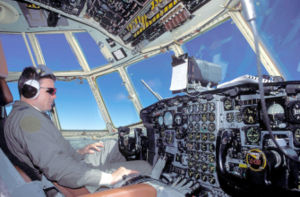 After the two prototypes were completed, production moved to Marietta, Georgia, where more than 2,000 C-130s have been built.[1]

The initial production model, the C-130A, was powered by Allison T56 turboprops with three-blade propellers. Deliveries began in December of 1956, continuing until the introduction of the C-130B model in 1959. Some A models were re-designated C-130D after being equipped with skis and rockets for jet-assisted takeoff. The newer C-130B had ailerons with more boost — 3,000 versus 2,050 lbf/in² (21 versus 14 MPa) — as well as uprated engines and four-bladed propellers that were standard until the late 1990s. The performance gains over the C-130A gave the C-130B the reputation of being the design's 'sports car' model.[citation needed]

The KC-130 tankers, originally C-130Fs procured for the US Marine Corps (USMC) in 1958 (under the designation GV-1) are equipped with a removable 13,626 liter (3600 US gallon) stainless steel fuel tank carried inside the cargo compartment. The two wing-mounted hose and drogue aerial refueling pods each transfer up to 19 liters per second (equivalent to 300 US gallons per minute) to two aircraft simultaneously, allowing for rapid cycle times of multiple-receiver aircraft formations, (a typical tanker formation of four aircraft in less than 30 minutes). The US Navy's C-130G has increased structural strength allowing higher gross weight operation.

The C-130H model has updated Allison T56-A-15 turboprops, a redesigned outer wing, updated avionics and other minor improvements. Later H models had a new, fatigue-life-improved, center wing that was retro-fitted to many earlier H-models. The H model remains in widespread use with the US Air Force (USAF) and many foreign air forces. Initial deliveries began in 1964 (to the RNZAF), remaining in production until 1996. An improved C-130H was introduced in 1974.

From 1992 to 1996 the C-130H was described as a C-130H3 by the USAF. The 3 denoting the third variation in design for the H series. Improvements included a partial glass cockpit (ADI and HSI instruments), a more capable APN-241 color radar, night vision device compatible instrument lighting and an improved electrical system using Bus Switching Units to provide 'clean' power to the more sensitive upgraded components. 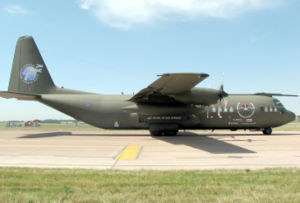 The equivalent model for export to the UK is the C-130K, known by the Royal Air Force (RAF) as the Hercules C.1. The C-130H-30 (Hercules C.3 in RAF service) is a stretched version of the original Hercules, achieved by inserting a 100-inch (2.54 m) plug aft of the cockpit and an 80-inch (2.03 m) plug at the rear of the fuselage. A single C-130K was purchased by the Met Office for use by its Meteorological Research Flight. This aircraft was heavily modified (with its most prominent feature being the long red and white striped atmospheric probe on the nose) to the extent that it was given the designation W.2, to differentiate it from the ordinary C.1. This aircraft, named Snoopy, was withdrawn in 2001. The C-130K Is used by the RAF Falcons for parachuting drops. 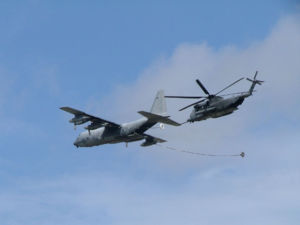 The HC-130N & P are long range search and rescue variants used by the USAF Air Rescue Service. Equipped for deep deployment of pararescue men (PJs), survival equipment, and aerial refueling of combat rescue helicopters (see KC-130H), they are usually the on-scene command aircraft for combat SAR missions. Early versions were equipped with the Fulton surface-to-air recovery system, designed to pull a person off the ground using a wire strung from a helium balloon. The John Wayne movie The Green Berets features its use. The Fulton system was later removed when aerial refueling of helicopters proved safer and more versatile. The movie The Perfect Storm depicts a real life SAR mission involving aerial refueling by an HC-130.

The C-130R and C-130T are US Navy and USMC models, both equipped with underwing external fuel tanks. The C-130T is similar, but has numerous avionics improvements over the R model and is fully night-vision system compatible. In both models, USMC aircraft are equipped with Allison T-56-A-16 engines. The USMC versions are designated KC-130R or KC-130T when equipped with underwing refueling pods and pylons.

The RC-130 is a reconnaissance version. A single example is used by the Islamic Republic of Iran Air Force.

In the 1970s Lockheed proposed a C-130 variant with turbofan engines rather than turboprops, but the US Air Force preferred the takeoff performance of the existing aircraft. In the 1980s the C-130 was intended to be replaced by the Advanced Medium STOL Transport project. However, the project was canceled and the C-130 has remained in production. 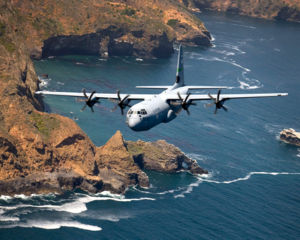 The C-130J Super Hercules is the newest version of the Hercules and the only model still produced. Externally similar to the classic Hercules in general appearance, the J model is a very different aircraft. These differences include new Rolls-Royce Allison AE2100 turboprops with six-bladed composite scimitar propellers, digital avionics (including Head-Up Displays (HUDs) for each pilot), reduced crew requirements (2 pilots — no navigator or flight engineer), increased reliability and up to 27% lower operating costs. The C-130J is also available in a standard-length or stretched -30 variant. Lockheed received the launch order for the J from the RAF, who ordered 25 aircraft, with first deliveries beginning in 1999 as Hercules C. Mk 4 (C-130J-30) and Hercules C. Mk 5 (C-130J).

The largest operator of the new model will be the USAF, who are ordering the aircraft in increasing numbers, although as of 2005 Congress announced C-130J acquisition would be dramatically cut. Current operators of the C-130J are the USAF, United States Marine Corps (KC-130J tanker), U.S. Air National Guard, US Coast Guard, Royal Air Force, Royal Australian Air Force, Danish Air Force and the Italian Air Force. Total procurement of C-130J aircraft has reached 186 orders as of December 2006.[6]

Lockheed has offered to lease four C-130J's to the German Luftwaffe, which has been awaiting a Transall replacement set for 2010 (the Airbus A400M), but the deal was rejected.

The Indian Air Force has submitted a request for the purchase of six C-130J aircraft. The sale is expected to be finalized by the middle of 2007.[7]

A Request for Proposal was awarded to Lockheed Martin on August 9, 2007, as part of the procurement process to replace the Canadian Forces CC-130E and H models with 17 new C-130J's. Lockheed Martin was deemed to be the only supplier out of the three that had responded to the solicitation of interest and qualification (SOIQ) process to fully meet the mandatory requirements. As such, Lockheed Martin is now required under the Request for Proposal process to respond and submit a formal bid. The government expects that a contract will be signed in winter of 2007, with first delivery scheduled for winter of 2010. The C-130J will be officially designated CC-130J Hercules in Canadian Forces service.[8]

The Royal Norwegian Air Force has decided to purchase four C-130Js to reinforce their transport capacity when it was discovered that their forty year old C-130s were unservicable during a wing change.[9] The Hercules holds the record for the largest and heaviest aircraft to land on an aircraft carrier. In October and November 1963, a USMC KC-130F (BuNo 149798), made 21 unarrested landings and take-offs on the USS Forrestal at a number of different weights. The pilot, Lt. James Flatley III, was awarded the Distinguished Flying Cross for his participation. The tests were highly successful, but the idea was considered too risky for routine "Carrier Onboard Delivery" (COD) operations. Instead, the C-2 Greyhound was developed as a dedicated COD aircraft. (The Hercules used in the test, most recently in service with VMGR-352 until 2005, is now part of the collection at the National Museum of Naval Aviation at NAS Pensacola, Florida.)

While the C-130 is involved in cargo and resupply operations daily, it has been a part of some notable offensive operations: 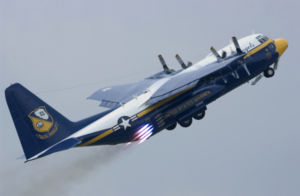 A prominent C-130T aircraft is Fat Albert, the support aircraft for the US Navy Blue Angels flight demonstration team. Although Fat Albert supports a Navy squadron, it is operated by the US Marine Corps (USMC) and its crew consists solely of USMC personnel. At some air shows featuring the team, Fat Albert takes part, performing flyovers and sometimes demonstrating its jet-assisted takeoff (JATO) capabilities.

The C-130 is generally a highly reliable aircraft. The Royal Air Force recorded an accident rate of about one aircraft loss per 250,000 flying hours over the last forty years, making it one of the safest aircraft they operate (alongside Vickers VC10s and Lockheed Tristars with no flying losses).[11] However, more than 15 percent of the 2,350-plus production has been lost, including 70 by the United States Air Force and the United States Marine Corps while serving in the war in Southeast Asia. By the nature of the Hercules' worldwide service, the pattern of losses provides an interesting barometer of the global hot spots over the past fifty years, including Iraq.[12]

In the late 1980s, 22 retired USAF C-130As were removed from storage at Davis-Monthan Air Force Base and transferred to the U.S. Forest Service who then sold them to six private companies to be converted into airtankers for use in fighting wildfires (see U.S. Forest Service airtanker scandal). After two of these aircraft crashed due to wing separation in flight as a result of fatigue stress cracking, the entire fleet of C-130A airtankers was permanently grounded in 2004. (See 2002 airtanker crashes.)

Significant variants of the C-130 include:

Operators of the C-130 shown in blue. 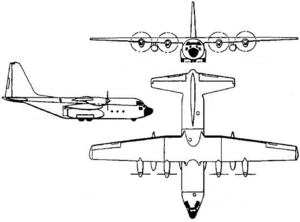 Data from The Aviation Zone[15]