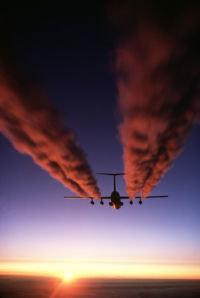 A C-141 Starlifter leaves a vapor trail over Antarctica

The Lockheed C-141 Starlifter was a military strategic airlifter in service with the United States Air Force. Introduced to replace slower piston-engined cargo planes such as the C-124 Globemaster II, the C-141 was designed to requirements set in 1960 and first flew in 1963; production deliveries of an eventual 285 planes began in 1965, 284 for the Military Airlift Command, and one for NASA. The aircraft remained in service for almost 40 years until the USAF withdrew the C-141 from service on May 5, 2006, replacing the aircraft with the C-17 Globemaster III.

The original Starlifter model, later designated the C-141A, could carry 138 passengers, 80 litters for wounded, or ten standard 463L master pallets with a total of 62,700 pounds (28,900 kg) of cargo. The C-141 could also carry specialized cargoes, such as the Minuteman missile. It was soon discovered that the aircraft's volume capacity was relatively low in comparison to its lifting capacity; it generally ran out of physical space long before it hit its weight limit.

NASA purchased one C-141A that was modified to house a telescope (the Kuiper Flying Observatory) that was used at very high altitudes. This NASA C-141A is now in the boneyard out at Edwards AFB, CA.

To correct the perceived deficiencies of the original model and use the C-141 to the fullest, 270 C-141As were stretched, adding needed payload volume. The new variant was designated the C-141B and the original redesignated the C-141A. Additional 'plug' sections were added before and after the wings, lengthening the fuselage by 23 ft 4 in (7.11 m) and allowing the carriage of 103 litters for wounded, 13 standard pallets, 205 troops, 168 paratroopers, or an equivalent increase in other loads. Also added at this time was a boom receptacle for inflight refueling. The conversion program took place between 1977 and 1982. It was estimated that this stretching program was the equivalent of buying 90 new aircraft, in terms of increased capacity.

In 1994, thirteen C-141Bs were given SOLL II (Special Operations Low-Level II) modifications, which gave the aircraft a low-level night flying capability, enhanced navigation equipment, and improved defensive countermeasures. The USAF operates these aircraft for the Air Force Special Operations Command. These aircraft are slated to be replaced by special-purpose new-build C-17s.

63 aircraft were upgraded throughout the 1990s to C-141C status, with improved avionics and navigation systems, to keep them up-to-date until C-17s were available to replace them. This variant introduced some of the first glass cockpit technology to the aircraft, as well as improving reliability by replacing some mechanical & electromechanical components with their electronic equivalents.

Service in Iraq and Afghanistan

On 16 September 2004 the C-141 left service with nearly all active duty USAF units, being confined to reserve units for the remainder of its service life. As of 25 September, 2005, there were only eight C-141 aircraft still flying (all from the 445th Airlift Wing at Wright-Patterson AFB). In 2004, 2005, and 2006, the C-141s stationed at WPAFB participated in missions to Iraq and Afghanistan, mostly for the medical evacuation of wounded servicemembers. 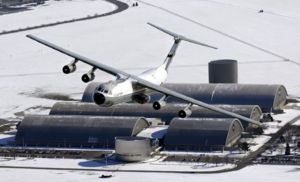 One of these last eight aircraft was the Hanoi Taxi (tail number 66-0177), the same aircraft that was used in 1973, in Operation Homecoming in the final days of the Vietnam War, to repatriate American POWs from North Vietnam. The Air Force repainted this aircraft in the same livery as it wore in 1973 as the final year of Starlifter operations approached. Framed photographs, plaques, and other memorabilia adorn the interior, suiting the aircraft to use as a "flying museum," a role it has filled at the Dayton Air Show and other venues.

With the 2006 announcement of the retirement of these last eight C-141s, the Hanoi Taxi embarked on a series of flights, giving veterans, some of whom flew out of captivity in this aircraft, the opportunity to experience one more flight before retirement. At 9:30 AM on Saturday, 6 May, 2006, the Hanoi Taxi landed for the last time and was received in a formal retirement ceremony at the National Museum of the United States Air Force, located at WPAFB in Riverside, Ohio near Dayton. The Hanoi Taxi is now part of the permanent static display collection of the Museum. [1] 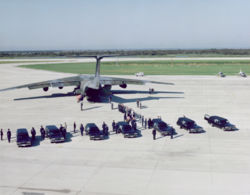