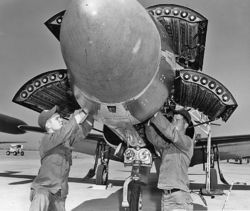 Built to a 1948 USAF specification for a radar equipped interceptor to replace the aging Northrop F-61 Black Widow and North American F-82 Twin Mustang, and specifically designed to counter the threat of the USSR's new Tupolev Tu-4 bombers. The F-94 was derived from the TF-80C (later T-33 Shooting Star) two-seat trainer version of the F-80 Shooting Star, with guns, radar and automatic fire control system added.

The fire control system was the Hughes E-1, which incorporated an AN/APG-33 radar (derived from the AN/APG-3 which directed the Convair B-36's tail guns) and a Sperry A-1C computing gunsight. The TF-80C fuselage was lengthened to hold the electronics and radar. Since the conversion seemed so simple, a contract was awarded to Lockheed in early 1949, with the first flight on 16 April 1949.

The added weight of the electronic equipment soon dictated that a more powerful engine be fitted, the afterburning Allison J33-A-33 replacing the regular J-33. The F-94 was to be the first US production jet with an afterburner. The combination of the new, larger engine and the electronics gear reduced the internal fuel capacity; removable tip tanks were added to compensate.

The initial model was the F-94A. Its armament was four .50 cal (12.7 mm) M2 Browning machine guns mounted in the fuselage with the muzzles exiting just behind the radome. Two 1,000 lb (450 kg) bombs could also be carried, giving the aircraft a secondary fighter bomber role. One hundred nine were produced. The subsequent F-94B, which entered service in January 1951, had upgraded and more reliable electronics and engines, as well as a new ILS. Three hundred fifty-six were built.

A detachment was sent to Korea, where it saw some combat in the Korean War, shooting down four enemy fighters. Another detachment was the 59th Fighter Interceptor Squadron, (all-weather, night-fighter interceptor,) which was sent to Goose Bay, Labrador in November, 1952 and placed under the control of NEAC (North East Air Command.) One flight from the 59th FIS was kept at Thule Airbase to back up the DEW-Line (Distant Early warning Radar sites on Greenland.)

The F-94B remained in USAF service through 1954 before being transferred to the Air National Guard. In ANG service, some were modified with a pod under each wing for two additional .50 cal (12.7 mm) machine guns, bringing the total to eight.

The F-94C Starfire was significantly modified from the early F-94 variants; in fact, it was initially designated F-97, but it was decided to treat it as just a new version of F-94. Initially, USAF interest was lukewarm, so Lockheed funded development themselves. To improve performance, a totally new wing was fitted, much thinner than the previous one. The J33 engine was replaced by a more powerful Pratt & Whitney J48, a license-built version of the afterburning Rolls-Royce Tay. The fire control system was upgraded to the new Hughes E-5 with AN/APG-40 radar in a much larger nose. The guns were removed, replaced with an all-rocket armament mounted in a ring around the nose radome.

The F-94C was the only variant to be officially named Starfire. With time, the entire F-94 family has adopted the name.

The first production aircraft were delivered in July 1951, 387 examples being delivered before May 1954. The largest problem discovered in service was that the nose-mounted rockets, while effective, blinded the crew with their smoke and fire. Mid-wing fuel and rocket pods were added, each holding 12 rockets. Most of the time, the nose rockets were not installed, and the mid-wing pod rockets were the sole armament.

An F-94D model was proposed as a fighter bomber, with bombs and rockets under the wings. A single prototype was built, but the model was not accepted for production. The prototype was later used as a testbed for the M61 Vulcan 20mm cannon subsequently used on the F-104 Starfighter and many others.

The F-94C was retired from service in 1959, as newer and more capable interceptors entered service.

Fewer than a dozen Starfires survive. The original YF-94A (s/n 48-356) is on display at the Air Force Flight Test Center Museum at Edwards Air Force Base in California. A well-preserved F-94C (s/n 50-980) has been on display for many years at the National Museum of the United States Air Force near Dayton, Ohio. There is also an F-94C on outdoor display at the New England Air Museum. A less fortunate Starfire is deteriorating in a cemetery near Erie, Pennsylvania; "P-47" has been crudely painted on its nose.