The Lockheed Constellation, affectionately known as the “Connie”, was a four-engine propeller-driven airliner built by Lockheed between 1943 and 1958 at its Burbank, California, USA, facility. A total of 856 aircraft were produced in four models, all distinguished by a distinctive triple-tail design and graceful, dolphin-shaped fuselage. It was used as both a civilian airliner and U.S. military air transport plane, seeing service in the Berlin Airlift and as the presidential aircraft for President Eisenhower.

Since 1937, Lockheed had been working on the L-044 Excalibur, a four-engine pressurized airliner. In 1939 Trans World Airlines, at the encouragement of major stockholder Howard Hughes, requested a 40-passenger transcontinental airliner with 3,500 mile (5,630 km) range[1] - well beyond the capabilities of the limited Excalibur design. TWA's requirements led to the L-049 Constellation, designed by such Lockheed engineers as Kelly Johnson and Hall Hibbard.[2] Willis Hawkins, another Lockheed engineer, maintains that the Excalibur program was purely a cover for the Constellation.[3] 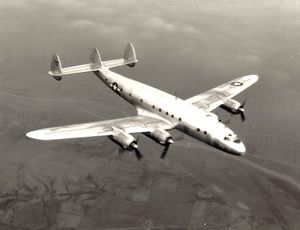 The military's C-69 prototype was based on the initial L-049 design.

Development of the Constellation

The Constellation's wing was effectively the same as that of the P-38 Lightning, differing only in scale.[4] The distinctive triple tail kept the aircraft's overall height low enough so that it could fit in existing hangars,[3] while new features included hydraulically-boosted controls and a thermal de-icing system used on wing and tail leading edges.[1]

With the onset of World War II, the TWA aircraft entering production were converted to an order for C-69 military transport aircraft, with 202 aircraft intended for the United States Army Air Forces. The first prototype (civil registration NX25600) flew on January 9, 1943, a simple ferry hop from Burbank to Muroc Field for testing.[1] Eddie Allen, on loan from Boeing, flew left seat, with Lockheed's own Milo Burcham as copilot. Rudy Thoren and Kelly Johnson were also on board.

With only 22 C-69s delivered before the end of hostilities, the military cancelled the remainder of the order. Aircraft already in production were thus finished as civilian airliners, with TWA receiving the first on 1 October 1945. The first transatlantic proving flight departed Washington, DC on 3 December 1945, arriving in Paris on 4 December via Gander and Shannon.[1]

Rumors persist that Hughes himself was influential in the design of the Constellation, but these are untrue. His only input was suggestions on the required performance and cockpit layout. He left the rest of the design work to Lockheed.[3] 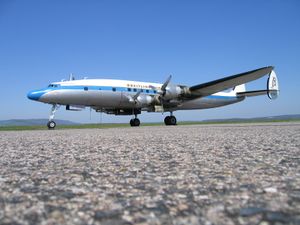 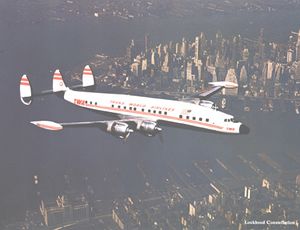 TWA was one of the best-known Constellation operators. The pictured aircraft is an L-1049 Super Constellation. 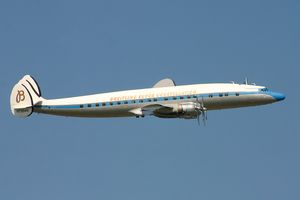 As the first pressurized airliner in widespread use, the Constellation helped to usher in affordable and comfortable air travel for the masses. Some of the more famous operators of Constellations were TWA, Pan American World Airways, Air France, BOAC, KLM, Qantas, Lufthansa, Iberia Airlines, Panair do Brasil, and Trans-Canada Airlines (later renamed Air Canada).

The Constellation suffered three accidents in the first ten months of airline service, temporarily curtailing its career as a passenger airliner.[5] On June 18 1946, the engine of a Pan American aircraft caught fire and fell off of the wing. The flight crew was able to make an emergency landing with no loss of life. However, on July 11 of the same year a TWA aircraft fell victim to inflight fire, crashing in a field and taking the lives of five of the six on board.[5] The accidents prompted the suspension of the Constellation's airworthiness certificate until Lockheed could modify the design to avoid repeats of the problems.

The Constellation, like the other piston-powered airliners of the day, proved prone to engine failures, earning it the nickname of "the world's finest three-engine airliner" in some circles.[citation needed]

Sleek and powerful, Constellations set a number of records. On April 17, 1944, the second production L-049, piloted by Howard Hughes and TWA president Jack Frye flew from Burbank, California to Washington D.C. in 6 hours and 57 minutes. On the return trip, the aircraft stopped at Wright Field to give Orville Wright his last plane flight, more than forty years after his historic first flight. He commented that the wingspan on the Constellation was longer than the distance of his first flight.[2]

On September 29, 1957, an L-1649A Starliner flew from Los Angeles to London in 18 hours and 32 minutes. The L-1649A still holds the record for the longest-duration non-stop passenger flight — during TWA's inaugural London to San Francisco flight on 1-2 October, 1957, the aircraft stayed aloft for a remarkable 23 hours and 19 minutes.

The advent of jet airliners, with the de Havilland Comet, Boeing 707, and Convair 880, rendered the piston-engined Constellation obsolete. The first routes lost to jets were the long overseas routes, but Constellations continued to fly domestic routes. The last scheduled passenger flight of a four-engined piston-engined airliner in the United States was made by a TWA L-749 on May 11 1967 from Philadelphia to Kansas City, MO. [6] Many Constellations continued to serve as fast freighters for years to come.

Several Constellations have been restored in recent years, a few to flying condition and are a popular sight at airshows. An (unflyable) example is visible at Greenwood Lake Airport, where it has been turned into part of the terminal building.

Two Constellations, the VC-121E Columbine III, used as Dwight D. Eisenhower's presidential aircraft, and an EC-121 Warning Star are fully restored and on display at the National Museum of the United States Air Force at Wright-Patterson Air Force Base near Dayton, Ohio. Several former Air Force One craft are on display at the Pima Air Museum, Tucson, used by President Eisenhower and his successors. Template:WS

Main article: List of models of the Lockheed Constellation

Constellations were used by dozens of airlines and militaries around the world. In military service, the Navy/Air Force EC-121 Warning Star variant remained operational until 1978, nearly 40 years after work on the L-049 began. 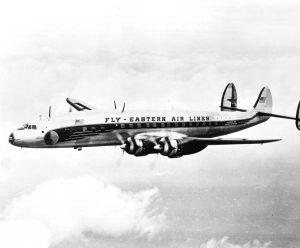 The Constellation was used by the following militaries:

The story of Hughes' collaboration with Lockheed for the production of the Constellation is told, in part, in the 2004 film The Aviator. 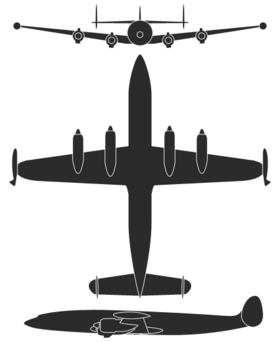 Data from Great Aircraft of the World[7], and Quest for Performance[8]