The Lockheed P-3 Orion is a maritime patrol aircraft of numerous militaries around the world, used primarily for maritime patrol, reconnaissance, and anti-submarine warfare.

The P-3 Orion, originally designated P3V, was based on the Lockheed L-188 Electra, which met limited success as a turboprop airliner competing against emerging pure jets. The P-3 served as the replacement for the postwar era P-2 Neptune. The Orion is powered by four turboprops which give it a speed comparable to fast propeller powered fighters, or even slow turbofan jets such as the A-10. Most other similar patrol aircraft use this model, with Soviets adapting their own counterpart to the Electra. The P-3 also competes with the British Nimrod adaptation of the de Havilland Comet and the French Breguet Atlantique.

The first production version, designated P3V-1, first flew 15 April 1961, but by the time the first deliveries were made in 1962, the unified designation system made this the P-3. Paint schemes have changed from overall postwar blue, to 1960s white and grey, and 1980s low viz gray.

Over the years many variants have been developed. The technology of the P-3 is similar to the larger, slower, and more successful C-130 Hercules transport. Similar versions have been developed for hurricane hunting, and aerial surveillance with a rotodome adapted from the E-2 Hawkeye. Despite higher performance, the P-3 has not been adapted into gunship or ground attack precision attack platform, aerial refueling tanker, or attempted a carrier landing like the C-130.

The United States Navy's P-3s are slated for replacement between 2010 - 2013 by the P-8 Poseidon, based on the Boeing 737 family of civil airliners. 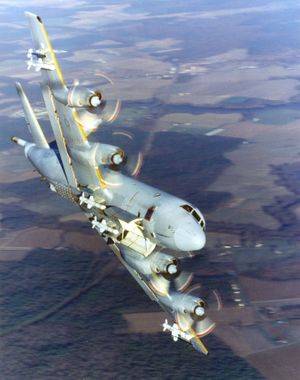 The P-3 has an internal bomb bay under the front fuselage, as well as underwing stations which can carry missiles such as the AGM-84 Harpoon. It has a long 'stinger' in the tail which houses the magnetic anomaly detector (MAD), and convex windows for observation. Sonobuoys can be dropped from externally loaded tubes (P-3C and later) or from inside the fuselage.

On many missions, an engine is often shut down (usually engine Number One, the left outer engine) once on station to extend the time aloft (and range when at low level) by conserving fuel. On occasion both outboard engines will be shut down, aircraft weight, weather, and remaining fuel permitting. Long border patrol missions can last over 10 hours, and may include extra pilots and crew. The record for the longest flight for a P-3 model is 21.5 hours, on a flight undertaken by the Royal New Zealand Air Force's No. 5 Squadron in 1972.

Engine Number one is the primary engine for 3-engine loiter shutdown because it is the only one of the P-3's four engines that does not have a generator, hence it is not needed for powering onboard electrical systems. It also removes the exhaust stream for that engine, increasing the visibility from the primary observer stations on the port side of the aircraft.

Other operators have a varying number of crew on board, depending on their equipment fitout and aircraft role. For example, the Royal Australian Air Force (RAAF) aircraft do not have a dedicated Ordnancemen, with that role on the aircraft being supplied by spare crew members from any of the other categories. Also, the RAAF aircraft operate with a ESM operator (Sensor 4), a Sensor Employment Manager (SEM) and a second Flight Engineer (with no In-Flight technician)

In April 2001 an aerial collision between a United States Navy EP-3E Aries II, a signals reconnaissance version of the P-3C Orion, and a People's Liberation Army Navy J-8IIM fighter jet resulted in an international incident between the United States and China. The J-8IIM fighter crashed and its pilot was killed; the EP-3 made an emergency landing on Hainan and the crew and plane were detained by Chinese authorities.

A number of P-3s have been N-registered and are operated by civilian agencies. The United States Customs Service has a number of P-3A and P-3Bs used for maritime patrol. NOAA operates two WP-3D variants specially modified for hurricane research. One P-3B, N426NA, is used by NASA as an earth-science suborbital research platform for NASA, based at Goddard Space Flight Center's Wallops Flight Facility, Virginia.

Aero Union, Inc., operates eight P-3As configured as air tankers, which are leased to the U.S. Forest Service, the California Department of Forestry and other agencies for firefighting use. A number of these were involved in a U.S. Forest service scandal.

A P-3 of the Royal New Zealand Air Force participated in the search of a missing boat. 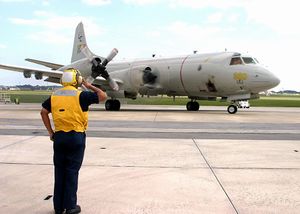