The Martin JRM Mars was the largest flying boat ever to enter production. The U.S. Navy contracted the development of the XPB2M-1 Mars in 1938 as a flying dreadnought for ocean patrol. 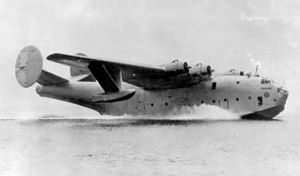 The Martin Company effectively scaled up their successful PBM Mariner patrol bomber design to produce the prototype XPB2M-1 Mars.[1] After flight tests with the XPB2M between 1941 and 1943, she was passed on to the Navy. The original patrol bomber concept was considered obsolete by this time, and the Mars was converted into a transport aircraft designated the XPB2M-1R. The Navy was satisfied with the performance, and ordered 20 of the modified JRM-1 Mars.[1] The first, named Hawaii Mars, was delivered in June 1945, but the with the end of World War II the Navy scaled back their order to just 5 more boats.[2] Though the original Hawaii Mars was lost in an accident on Chesapeake Bay, the other 5 Mars were built with the last delivered in 1947.

Named the Marianas Mars, Philippine Mars, Marshall Mars, Caroline Mars, and a second Hawaii Mars, the 5 production Mars aircraft entered service ferrying cargo to Hawaii and the Pacific Islands. On May 5, 1950, the Marshall Mars was lost near Hawaii when an engine fire consumed the airplane after her crew had evacuated. The remaining "Big Four" flew record amounts of cargo on the San Francisco-Honolulu route efficiently until 1956, when they were parked at NAS Alameda.[1] 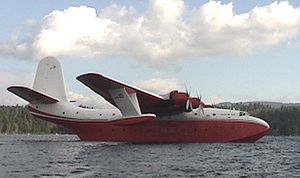 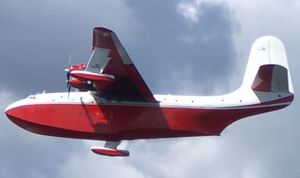 In 1959, the remaining Mars were sold for scrap. Dan McIvor, who represented a consortium of British Columbia lumber companies, recognized their potential value as water bombers and had them converted. A company called Flying Tankers Inc. was formed, and purchased the "Big Four" for aerial firefighting. The Marianas Mars crashed near Northwest Bay, British Columbia on June 23, 1961 during firefighting operations; all four crewmembers were lost. Just over a year later, on October 12, 1962, the Caroline Mars was destroyed by Typhoon Freda while parked onshore. The remaining Hawaii Mars and Philippine Mars had their conversions to water bombers accelerated and entered service in 1963.[1]

The two surviving tankers are still operated by Flying Tankers Inc., now a subsidiary of TimberWest Forest Ltd., and are based at Sproat Lake near Port Alberni, British Columbia. When converted, the original powerplants were replaced with four Wright R-3350-24WA Cyclone engines of 2500 hp (1860 kW) each. The aircraft can carry up to 7,200 US gal (27,250 litres) of water, enough to cover an area of 4 acres (16,000 m²).[3] They are used to fight fires along the coast of British Columbia, and even sometimes in the interior. They also make appearances at local airshows, demonstrating their water-dropping ability. Flying Tankers Inc. also flies the water bombers to other hotspots around the world if a need develops, such as in August of 2003 when a large forest fire threatened the city of Kelowna, British Columbia. On November 10, 2006, TimberWest Forest Ltd. announced that they are looking for buyers of the Mars. A condition of this sale is that the purchasers will donate one back to Port Alberni when they are retired as a historical attraction.[4] The Maryland Aviation Museum and British Columbia Aviation Council have initiated a joint effort to preserve the aircraft, one in Maryland and the other at their current location in Canada. [5]