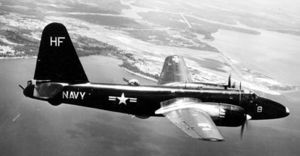 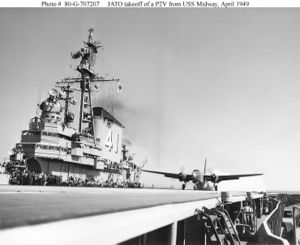 A P2V-3C Neptune prepares to take off from the USS Midway. 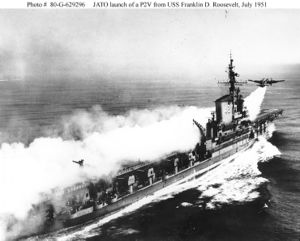 The Lockheed P-2 Neptune (until 1963 the P2V Neptune) was a naval patrol bomber and anti-submarine warfare (ASW) aircraft for the United States Navy between 1947 and 1978, replacing the PV-1 Ventura and PV-2 Harpoon and being replaced in turn with the P-3 Orion. Designed as a land-based aircraft, the Neptune never made a carrier landing, although a small number of aircraft were converted for carrier use and successfully launched. The type was successful in export, seeing service with several armed forces. The Neptune shares the P-2 designation (albeit under a different designation system) with the Curtiss P-2 Hawk, a much earlier biplane.

Development began early in World War II, but was considered a low priority and it was not until 1944 that things really got going. A major factor in the design was ease of manufacture and maintenance, and this can be said to have been a major factor in the type's long life and worldwide success. The first aircraft flew in 1945. Production began in 1946, and the aircraft was accepted into service in 1947.

It was one of the first aircraft to be fitted in operational service with both piston and jet engines. The Convair B-36, several Boeing C-97 Stratofreighter, C-123 Provider, and Avro Shackleton aircraft also achieved that distinction; it leads naturally to an unusual sound during overflight.

The third production P2V-1 was chosen for a record-setting mission, ostensibly to test crew endurance and long-range navigation but also for publicity purposes, to display the Navy's latest expensive plane. Loaded with fuel in extra tanks fitted in practically every spare space in the aircraft, the Turtle set out from Perth, Australia to the United States. The aircraft, invariably, seems to be called "Truculent Turtle" but, in fact, its name was simply "The Turtle"; which was painted on the aircraft's nose (along with a cartoon of a turtle smoking a pipe pedaling some device attached to a propeller). With a crew of four (and a nine month old gray kangaroo, a gift from Australia for the Washington, D.C zoo) the plane set off on September 9, 1946, with a RATO rocket-assisted takeoff. Two and a half days later, the Turtle touched down in Columbus, Ohio, 11,236.6 miles (18,083.6 km) from its starting point. It was the longest unrefuelled flight made to that point—4,000 miles (6,400 km) longer than the USAF's B-29 Superfortress record. This would stand as the absolute unrefueled distance record until 1962 (beaten by a USAF B-52 Stratofortress), and would remain as a piston-engined record until 1986 when Dick Rutan's Voyager would break it in the process of circumnavigating the globe.

During Vietnam War Neptune was used by the US Navy as a gunship and patrol airplane The Neptune was also utilized by the U.S. Army's 1st Radio Research Company (Aviation) located at Cam Ranh Bay.

The Argentine Navy received at least 16 Neptunes from different variants since 1958 including 8 ex Royal Air Force.

They were intensively used in 1978 during the Beagle crisis with Chile including over the Pacific Ocean [1].

In 1982, during the Falklands War (Spanish: Guerra de Malvinas ) the last two airframes in service (2-P-111 and 2-P-112) played a key role of reconnaissance and aiding Dassault Super Étendards, particularly on May 4 against HMS Sheffield. The lack of spare parts, the US placed an arms embargo in 1977 due the Dirty War, lead to the type being retired before the end of the war; Argentine Air Force C-130 Hercules took over the task of searching for targets for strike aircraft.

In Australia, Canada, the Netherlands and the US Navy its tasks were taken over by the much larger and more capable P-3 Orion and by the 1970s it was only in use by US reserve units. The US Naval Reserve abandoned its last Neptunes in 1978. By the 1980s, it had fallen out of use in most purchasing nations, replaced by newer aircraft.

In Japan, the Neptune was license-built from 1966 by Kawasaki as the P-2J, with the piston engines replaced by IHI turboprops. Kawasaki continued their manufacture much later than Lockheed did; the P-2J remained in service until 1984.

P-2/P2Vs are currently employed in aerial firefighting roles by operators such as Aero Union and Neptune Aviation Services and can carry 2,400 gallons of retardant with a service life of 15,000 hours. Neptune proposes to replace them with Bombardier Q200 and Q300 aircraft which are estimated to have a service life of 80,000 hours.

Lockheed produced seven main variants of the P2V. In addition, Kawasaki built the turboprop-powered P-2J in Japan. Model names after the 1962 redesignation are given in parentheses. 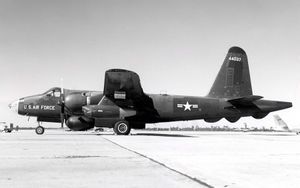 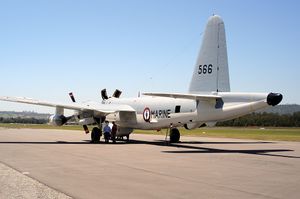