The Lockheed S-3 Viking is a jet aircraft originally used by the United States Navy to identify, track, and destroy enemy submarines. In the late 1990's, the S-3B's mission focus shifted to surface warfare and aerial refueling. After the retirement of the A-6 Intruder and A-7 Corsair II, the Viking was the only airborne refueling platform organic to the Carrier Air Wing(s) until the fielding of the F/A-18E/F Super Hornet. It also provides electronic warfare and surface surveillance capabilities to the carrier battle group. A carrier-based, subsonic, all-weather, multi-mission aircraft with long range, it operates primarily with carrier battle groups in anti-submarine warfare roles. It carries automated weapon systems, and is capable of extended missions with in-flight refueling. Because of the engines’ high-pitched sound, it is nicknamed the "Hoover" after the brand of vacuum cleaner. 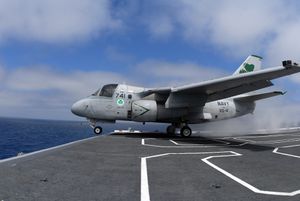 The S-3 Viking was designed by Lockheed with the assistance from Ling-Temco-Vought (LTV) and UNIVAC to fit the United States Navy VSX (Heavier-than-air, Anti-submarine, Experimental) requirement for a replacement for the piston-engined Grumman S-2 Tracker. Since Lockheed had no experience in building carrier-based aircraft, LTV was responsible for construction of the folding wings and tail, the engine nacelles, and the landing gear which was derived from A-7 Corsair II (nose) and F-8 Crusader (main). UNIVAC built the onboard computers which integrated input from sensors and sonobuoys.[1] The first prototype flew on January 21, 1972 and the S-3 entered service in 1974. During the production run from 1974 to 1978, a total of 186 S-3As were built.

The S-3 is a conventional monoplane with a high-mounted cantilever wing, swept 15°. The two GE TF-34 high-bypass turbofan engines mounted in nacelles under the wings provide exceptional cruise efficiency compared to turbojets or earlier turbofans.

The aircraft can seat four crew members with the pilot and the copilot/tactical coordinator (COTAC) in the front of the cockpit and the tactical coordinator (TACCO) and sensor operator (SENSO) in the back. Entry is by an entry door / ladder which folds out of the side of the fuselage. All crew members sit on upward-firing Douglas Escapac zero-zero ejection seats. At the end of the 1990's the sonar operators were removed from the crew. In the tanking crew configuration, the S-3B typically flies with only a crew of two (pilot and COTAC). The wing is fitted with leading edge and Fowler flaps. Spoilers are fitted to both the upper and the lower surfaces of the wings. All control surfaces are actuated by dual hydraulically boosted irreversible systems.

The aircraft has two underwing hardpoints that can be used to carry fuel tanks, general purpose and cluster bombs, missiles, rockets, and storage pods. It also has four internal bomb bay stations that can be used to carry general purpose bombs, torpedoes, and special stores (B57 and B61). Fifty-nine sonobuoy chutes are fitted, as well as a dedicated Search and Rescue (SAR) chute. The S-3 is fitted with the ALE-39 countermeasure system and can carry up to ninety rounds of chaff, flares, and expendable jammers (or a combination of all) in three dispensers. A retractable magnetic anomaly detector (MAD) boom is fitted in the tail. 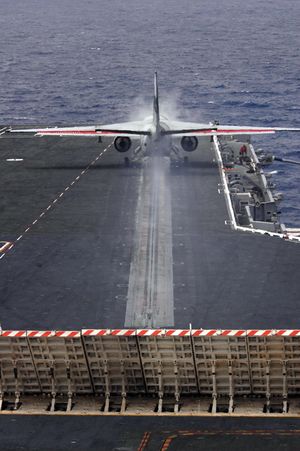 An S-3B Viking of the “Shamrocks” launches from Nimitz.

On February 20, 1974, the S-3A officially became operational with the VS-41 Shamrocks Fleet Replacement Squadron. The first operational cruise took place in 1977 with VS-21 Fighting Redtails aboard Constellation.

Starting in 1991, some of these were upgraded to the S-3B with a number of new sensors, avionics, and weapons systems, including the capability to launch the AGM-84 Harpoon anti-ship missile. The S-3B can also be fitted with "buddy stores" external fuel tanks that allow the Viking to refuel other aircraft. Sixteen S-3As were converted to ES-3 Shadows for carrier-based electronic intelligence (ELINT) duties. A few aircraft, designated US-3A, were also converted for utility and limited cargo duty.[1] Plans were also made to develop the KS-3A carrier-based tanker aircraft to replace the retired KA-6 but these were ultimately cancelled.

Since the submarine threat has been perceived as reduced, the Vikings have had the majority of their antisubmarine warfare equipment removed and are now used primarily for sea surface search, sea and ground attack, over-the-horizon targeting, and aircraft refueling.[1] As a result, crews are now usually limited to two, though three person crews are not unusual with certain missions. It has been used as a jet VIP transport, as was the case of bringing George W. Bush aboard the Abraham Lincoln.

A number of recent upgrade programs have been implemented. These include the Carrier Airborne Inertial Navigation System II (CAINS II) upgrade, which replaced older inertial navigation hardware with ring laser gyroscopes and additional GPS systems, and added electronic flight instruments (EFI). The Maverick Plus System (MPS) added the capability to employ the AGM-65E laser-guided or AGM-65F infrared-guided AGM-65 Maverick air-to-surface missile, and the AGM-84H/K Stand-off Land Attack Missile Expanded Response (SLAM/ER). The SLAM/ER is a GPS/inertial/infrared guided cruise missile that can be controlled by the aircrew in the terminal phase of flight if an AWW-13 data link pod is carried by the aircraft.[1]

The S-3B saw extensive service during the 1991 Gulf War, performing attack, tanker, and ELINT duties, and launching ADM-141 TALD decoys. The aircraft also participated in the Yugoslav wars in the 1990s and in Operation Enduring Freedom in 2001.

As the surviving S-3 airframes were forced into sundown, a Lockheed Martin full scale fatigue test was performed and extended the service life of the aircraft by approximately 11,000 hours. The current Navy plans call for the retirement of all Vikings by 2009 so new aircraft can be introducted to recapitalize the aging fleet inventory. Their missions will be spread among the other battlegroup fixed-wing and rotary-wing aircraft. During FIDAE 2006 aerospace and defense trade show, the US Navy offered retired airframes to the navies of Argentina, Brazil, Chile and Peru, with deliveries beginning in 2009. 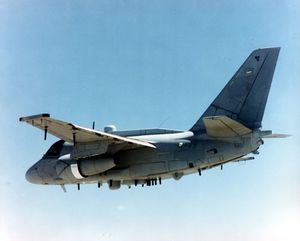 The ES-3A Shadow ES-3A was designed as a carrier-based, subsonic, all-weather, long-range, electronic reconnaissance (ELINT) aircraft. All 16 aircraft were modified S-3 Viking airframes, which were modified with numerous additional antennas and antenna housings. The Shadow replaced the EA-3B Skywarrior, and entered fleet service in 1993.

The ES-3A operated primarily with carrier battle groups, providing organic ‘Indications and Warning’ support to the group and joint theater commanders. It carried an extensive suite of electronic sensors and communications gear, replacing the S-3’s submarine detection, armament, and maritime surveillance equipment with avionics racks accommodating the ES-3A’s sensors. Unfortunately, these modifications greatly restricted airspeed and range. As a result, the Shadow was considered by some to be an inadequate replacement for the venerable EA-3B.[citation needed]

The first ES-3A was delivered in 1991, entering service after two years of testing. The Navy established 2 squadrons or eight aircraft each. The VQ-5 Sea Shadows were originally based in Agana, Guam but later moved to NAS North Island, San Diego, California. The VQ-6 Black Ravens were originally based at NAS Cecil Field, Jacksonville, Florida, but later moved to NAS Jacksonville, approximately 15 miles away. Each squadron deployed a detachment aboard each U.S. aircraft carrier - a Detachment typically consisted of two aircraft, 10 Officers, and 55 Enlisted and contained four complete aircrews.

In addition to their indications and warning and reconnaissance roles, because of their extraordinarily stable handling characteristics and range, Shadows were a preferred recovery tankers, aircraft assigned to ensure that other returning aircraft had access to additional fuel. The aircraft were frequently used, averaging over 100 hours per month while deployed. Excessive utilization rated of the aircraft caused the need for earlier than expected equipment replacement during a time when money for Naval aviation was in short supply thus making them an easy target for budget driven decision makers. In 1999, both ES-3A squadrons and all 16 aircraft were decommissioned. The ES-3A inventory was placed in Aerospace Maintenance and Regeneration Center (AMARC) storage.

On May 1, 2003, US President George W. Bush rode in the co-pilot seat of a Viking that landed on USS Abraham Lincoln, where he delivered his "Mission Accomplished" speech announcing the end of major combat in the 2003 invasion of Iraq. This was the only Navy flight to date to use the callsign "Navy One". The pilot was the Executive Officer of VS-35, Navy Commander John "Skip" Lussier.

The S-3 Viking was also used to transport a captured Achille Lauro terrorist back to the United States after an Egyptian Airliner carrying the terrorists was intercepted by United States Navy fighters on October 10, 1985.

The two underwing hardpoints can also be fitted with unguided rocket pods or 300 US gal (1,136 L) fuel tanks.