The Lockheed L-1011 TriStar, commonly referred to as just L-1011 (pronounced "ell-ten-eleven") or TriStar, is a medium-to-long range, three-engine, widebody passenger jet airliner. It was the third widebody airliner to enter commercial operations, following the Boeing 747 and the McDonnell Douglas DC-10. Between 1968 and 1984, Lockheed manufactured a total of 250 TriStars. After production ended, Lockheed withdrew from the commercial aircraft business due to its below-target sales.[1]

In the 1960s, American Airlines approached Lockheed and competitor Douglas (later McDonnell Douglas) with the need for an airliner smaller than the 747, but still capable of carrying a large passenger load to distant locales such as London and Latin America from company hubs in Dallas/Ft Worth and New York. Lockheed had been largely absent from the civil airliner market since the late 1950s following problems with its L-188 Electra, which had suffered a number of crashes early in its career due to wing vibration. However, having experienced difficulties with some of its military programs, Lockheed was keen to re-enter the civil market, and its response was the L-1011 TriStar. The aircraft was originally conceived as a "jumbo twin", but a three-engine design was ultimately chosen to give the plane enough thrust to take off from existing runways.[2]

File:LockheedL1011.jpg
Prototype TriStar in a Lockheed hangar on November 16, 1971

The design featured a twin-aisle interior with a maximum of 400 passengers, a three-engine layout, low noise emissions (in the early 1970s, Eastern Air Lines nicknamed the L-1011 "The WhisperLiner"), improved reliability, and efficient operation. The main visible difference between the TriStar and the DC-10 that emerged at Douglas is in the middle/tail engine; the DC-10's engine is mounted above the fuselage for more power and easier maintenance, while the TriStar's engine is integrated into the tail through an S-duct (similar to that of the Boeing 727) for improved quietness and stability. A major differentiator between the L-1011 and the DC-10 was Lockheed's selection of the Rolls-Royce RB211 engine for the L-1011. As originally designed, the RB211 turbofan was an advanced three-spool design with a carbon fibre fan, which would have better efficiency and power-to-weight ratio than any competing design. This would make the L-1011 more efficient, a major selling point.

American Airlines opted for the Douglas DC-10, although it had shown considerable interest in the L-1011. American's intent in doing so was to convince Douglas to lower its price for the DC-10, which it did.[3] Without the support of American, the TriStar was launched on orders from TWA and Eastern Air Lines. Although the TriStar's design schedule closely followed that of its competitor, the DC-10, Douglas beat Lockheed to market by a year due to delays in power plant development. In February 1971, after massive development costs associated with the RB211, Rolls-Royce went into receivership. This halted L-1011 final assembly, but by then it was too late to change engine suppliers (to either General Electric or Pratt & Whitney).

Logo of the Lockheed L-1011 TriStar

The British government agreed to approve a large state subsidy to restart Rolls-Royce operations on condition the U.S. government guarantee the bank loans Lockheed needed to complete the L-1011 project.[4] Despite some opposition, not least from the then Governor of California Ronald Reagan, the U.S. government provided these guarantees.[5] For the rest of the RB211 project, Rolls remained a government-owned company.

The earlier versions of the L-1011, such as the -1, -100, and -150 can be distinguished from the later models by the design of the middle engine nacelles. The earlier version nacelle has a round intake, whereas the later models have a small vertical fin between the bottom of the middle engine intake and the top of the fuselage.

The L-1011 featured a highly advanced autopilot system and was the first widebody to receive FAA certification for Cat-IIIc autolanding, which approved the TriStar for completely blind landings in zero-visibility weather performed by the aircraft's autopilot. It also had a unique Direct Lift Control (DLC) system, which allowed for smooth approaches when landing. DLC helps maintain the descending glideslope on final approach by automatically deploying spoiler panels on the wings. Thus, rather than maintaining the descent by adjusting pitch, DLC helps control the descent while maintaining a more consistent pitch angle, using four redundant hydraulic systems; production also utilized a unique "autoclave" system for bonding fuselage panels together. This made the L-1011 extremely resistant to corrosion.

Lockheed bribed the members of the Japanese government to subsidize ANA's purchase of L-1011s. The resulting political scandal led to the arrest of Prime Minister Kakuei Tanaka. Within Lockheed, board chairman Daniel Haughton and vice chairman and president Carl Kotchian resigned from their posts on 13 February 1976. Tanaka was eventually tried and found guilty of violating foreign exchange control laws, but was not charged with bribery, a more serious criminal offense.[7]

The Soviet Union at that time lacked a wide-body airliner. Development of their own Ilyushin Il-86 was delayed, so in mid 1970s the Soviets started negotiations to buy 30 TriStars and licence-produce up to 100 a year.[8] The talks collapsed as US President Jimmy Carter made human rights a US policy factor. The TriStar was also listed by the Coordinating Committee as embodying advanced technology banned from potential enemies.

Manufactured in Lockheed facilities in Burbank and Palmdale, California, the TriStar faced brisk competition with the 747 and, even more directly, the DC-10, which it closely resembled. Trans World Airlines heralded the TriStar as one of the safest airplanes in the world in some of its promotional literature in the 1980s when concern over the safety record of the DC-10, which was flown by most of its competitors, was at its peak.Template:Citation needed However, 446 DC-10s were sold compared to 250 TriStars, partly because of the TriStar's delayed introduction but particularly because a heavier, longer-range version was not initially offered. Under state control, costs at Rolls-Royce were tightly controlled, and the company's efforts largely went into the original TriStar engines, which had needed considerable modifications between the L-1011's first flight and service entry. The competition, notably General Electric, were very quick to develop their CF6 engine to higher thrust, which meant that a heavier 'intercontinental' DC-10-30 could be brought to market. The flexibility afforded to potential customers by a long-range DC-10 quickly put the L-1011 at a serious marketing disadvantage. Rolls-Royce went on to develop the high-thrust RB211-524 for the L-1011-200 and -500, but this took many years.

Lockheed needed to sell 500 planes to break even, but in 1981 announced production would end with delivery of the 250th and last plane on order in 1984. The TriStar's failure to achieve profitability caused Lockheed to withdraw from the civil aircraft business.[1]

Most major airlines have retired the type from their fleets. Cathay Pacific retired its L-1011 fleet in October 1996, replacing the fleet with Airbus A330-300. TWA withdrew its last TriStar from service in 1997. Delta retired its TriStar fleet in 2001, replacing them with the Boeing 767-400ER.

The L-1011 still sees use by smaller start-up carriers, particularly in Africa and Asia. These operators mainly do their business in the ad hoc charter and wet leasing businesses. ATA Airlines (formerly known as American Trans Air) fleet included over 19 Tristars, but operations dwindled to only three L1011-500s prior to the company's shut-down in April 2008.

The two L-1011 aircraft delivered to Pacific Southwest Airlines were configured with internal airstair doors that led into an entry hall in what was normally the forward lower baggage hold. This was to allow operations from airfields that did not have terminal buildings with jet bridges. These two aircraft were later in service with Aeroperú and Worldways Canada.

In the early 1990s, Orbital Sciences began to use a converted L-1011-100 named Stargazer to launch Pegasus rockets into orbit around Earth. This venture effectively rendered the small Scout rocket obsolete.[9][10] This aircraft was also used in support of the X-34 and X-43 programs. NASA performed aerodynamic research on Orbital Science's L-1011 in 1995.[11]

The TriStar has also been used as a military tanker and passenger/cargo aircraft. The Royal Air Force has nine aircraft of four variants. The aircraft are ex-British Airways and Pan Am L-1011-500s. All of the aircraft serve with No. 216 Squadron, and are based at RAF Brize Norton. The TriStar will remain in service with the RAF until early in the next decade, when it is scheduled to be replaced by the Airbus A330 MRTT under the Future Strategic Tanker Aircraft (FSTA) program.

The L-1011-1 was the first production model of the L-1011, designed for short and medium-range flights. This type was purchased by Air Canada, ANA, Cathay Pacific, Eastern and other operators with regional trunk routes requiring a widebody aircraft. Pacific Southwest Airlines purchased two L-1011[12]-1 models with lower deck seating. This variant was also the only wide-body to have the option for a full-height built-in airstair incorporated into the design.Template:Citation needed

The L-1011-100 first flew in 1975 and featured a new center fuel tank that increased the aircraft's range by nearly Template:Convert. It was purchased by several airlines with longer-range routes, such as TWA, Air Canada and BEA.

The L-1011-200 was introduced in 1976. Although otherwise similar to the -100, the -200 uses Rolls-Royce RB.211-524B engines to improve its performance in hot and high-altitude conditions. Gulf Air used -200 models to replace its earlier generation Vickers VC-10 fleet. Saudi Arabian Airlines (SAUDIA), was a launch customer for the -200 series and operated a sizeable fleet until 1998.

The L-1011-500 was a longer-range variant first flight tested in 1978. Its fuselage length was shortened by Template:Convert to accommodate higher fuel loads. It also utilizes the more powerful engines of the -200 series. The -500 variant was popular among international operators and formed a significant portion of the L-1011 fleet of Delta and British Airways.

The Airline History Museum in Kansas City has obtained one of the last three operational L-1011s in the U.S. for the museum's permanent collection.[20] 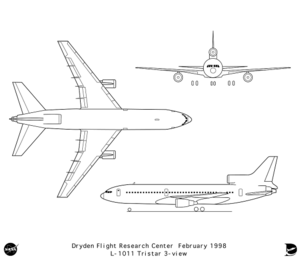 The airplane used on the ABC television series Lost is a dismantled L-1011 formerly belonging to Eastern Airlines and later Delta Air Lines.[23]

The L-1011 was the inspiration for the name of the Los Angeles based post-rock duo, El Ten Eleven