The Lockheed P-80 Shooting Star was the first operational jet fighter used by the United States Army Air Forces and, as the F-80, saw extensive combat in Korea with the United States Air Force. As one of the world's first successful turbojet-powered combat aircraft, it helped usher in the "jet age" in the USAF and other air forces worldwide. One of its clams to fame is in training a new generation of pilots, especially in its closely-related T-33 Shooting Star trainer development. 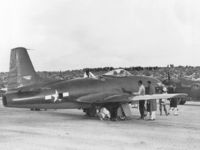 Concept work began on the XP-80 in 1943 with a design being built around the blueprint dimensions of a British de Havilland H1 B turbojet, a powerplant to which the design team did not have actual access. Lockheed's team, consisting of 28 engineers, was led by the legendary Clarence L. "Kelly" Johnson. This teaming was an early product of Lockheed's Skunk Works, which would surface again in the next decade to produce a line of high performing aircraft beginning with the F-104 Starfighter.

The XP-80 was a conventional, all-metal airframe with a slim low wing and tricycle undercarriage (landing gear). The P-80 was one of the first operational jet fighters to have its engine integrated within the main fuselage, first seen in and pioneered by the earlier P-59 Airacomet. Other early jet fighters had their engines in external pods for easier maintenance); this design feature was one that that would be used by nearly all subsequent fighter aircraft.

The first prototype (44-83020), nicknamed Lulu-Belle (and also known as "the Green Hornet" because of its green paint scheme), flew on 8 January 1944 with Lockheed test pilot Tony LeVier at the controls, just 143 days after design work commenced, which was a full 37 days ahead of schedule. Lulu-Belle was powered by a replacement Halford H1 (later "Goblin") taken from the prototype de Havilland Vampire and shipped to the States after the original flight engine was accidentally destroyed. Following its first flight Clarence Johnson said: "It was a magnificent demonstration, our plane was a success -- such a complete success that it had overcome the temporary advantage the Germans had gained from years of preliminary development on jet planes.". 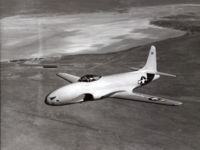 The XP-80A Gray Ghost in flight.

The second prototype, designated XP-80A, was designed for the larger GE I-40 (later designated J-33) engine, with two aircraft (44-83021 and 44-83022) built. 44-83021 was nicknamed the "Gray Ghost" after its "pearl gray" paint scheme, while the second XP-80A, left unpainted for comparison of flight characteristics, became known as the "Silver Ghost". Its first test flight was unimpressive, but most of the problems with the design were soon addressed and corrected in the test program. Initial opinions of the I-40 powered P-80A were not positive, with Lockheed chief engineeing test pilot Milo Burcham commenting that an aircraft that he very much enjoyed (powered by the Halford engine) had now become a "dog". The XP-80A's were primarily test beds for bigger engines and intake duct design, and consequently were larger and 25% heavier than the XP-80.

The P-80 testing program proved very dangerous. Burcham was killed on 20 October 1944 while flying the third YP-80A produced, 44-83025. The "Gray Ghost" was lost on a test flight on March 20, 1945, although pilot Tony LeVier successfully parachuted. Newly promoted to chief engineering test pilot to replace Burcham, LeVier bailed out when one of the engine's turbine blades broke, causing structural failure in the airplane's tail. LeVier landed hard and broke his back, but returned to the test program after six months of recovery. Noted ace Major Richard Bong was also killed on an acceptance flight of a production P-80 in the United States on 6 August 1945. Both pilots crashed as a result of main fuel pump failure. Burcham's death was the result of a failure to brief him on a newly installed emergency fuel pump backup system, but the investigation of Bong's crash found that he had apparently forgotten to switch on the emergency fuel pump that could have prevented the accident. He successfully bailed out when the aircraft rolled inverted but was too close to the ground for his parachute to deploy.

The Shooting Star began to enter service in late 1944 with 12 pre-production YP-80A's (a 13th YP-80A was modified to the only F-14 photo reconnaissance model and lost in a December crash), one of which was destroyed in the accident that killed Burcham. Four were sent to Europe for operational testing (two to England and two to the 1st Fighter Group at Lesina, Italy) but when test pilot Major Frederic Borsodi was killed in a crash caused by an engine fire on 28 January 1945, demonstrating YP-80A 44-83026 at RAF Burtonwood, the YP-80A was temporarily grounded. Because of the delay the Shooting Star saw no combat in World War II.

The USAF Strategic Air Command had F-80 Shooting Stars in service from 1946 through 1948 with the 1st and 56th Fighter Groups. The first P-80s to serve in Europe joined the 55th Fighter Group (later redesignated the 31st FG) at Giebelstadt, Germany, in 1946, remaining eighteen months. When the Soviet Union blockaded Berlin, a squadron of the 56th FG led by Col. David C. Schilling made the first Atlantic crossing from west to east in July, flying to Germany for 45 days in Operation Fox Able. Replaced by the newly F-80-equipped 36th Fighter Group at Furstenfeldbruck, the 56th FG conducted Fox Able II in May 1949. That same year F-80s first equipped the 51st Fighter Group, based in Japan.

The 4th (Langley Air Force Base, Virginia); 81st (Kirtland Air Force Base, New Mexico), and 57th (Elmendorf Air Force Base, Alaska) Fighter Groups all acquired F-80s in 1948, as did interceptor squadrons of the Air Defense Command. The first Air National Guard unit to fly the P-80 was the 196th FS of the California ANG in June 1947.

Shooting Stars first saw combat service in the Korean War, mainly the more powerful F-80C variant but also RF-80 photo recon planes. The first jet versus jet aircraft battle took place on 8 November 1950 in which an F-80 shot down a MiG-15 (disputed as the first jet-versus-jet kill). However, the straight-wing F-80s were inferior in performance to the MiGs and were soon replaced in the air superiority role by the swept-wing F-86 Sabre. When sufficient Sabres were in operation, the Shooting Star was assigned to ground attack missions, advanced flight training duties and air defense in Japan.

The longest-serving F-80 unit in Korea was the 8th Fighter-Bomber Wing, which began missions from Japan in June 1950. Its 35th, 36th and 80th Fighter-Bomber Squadrons flew F-80s until May 1953, when the wing converted to the F-86 Sabre. Its primary base from 1951-53 was at Suwon. The 49th Fighter-Bomber Group and its 7th, 8th and 9th Fighter-Bomber Squadrons deployed to Taegu, Korea from Japan in September 1950 and continued fighter-bomber missions in the F-80C until spring 1952, when it converted to the F-84 Thunderjet. The 51st Fighter-Interceptor Wing (16th and 25th FIS) operated F-80Cs from Kimpo and Japan from September 1950 to November 1951 when it transitioned to F-86s. The 35th Fighter-Interceptor Group and two squadrons, the 39th and 40th FIS, went to Pohang, Korea in July 1950, but converted to P-51 Mustang before the end of the year.

Of the 277 F-80s lost in operations (approximately 30% of the existing inventory), 113 were destroyed by ground fire and 14 shot down by enemy aircraft.[1] Major Charles J. Loring, Jr. was awarded the Medal of Honor for his actions while flying with the 80th Fighter-Bomber Squadron, 8th Fighter-Bomber Wing on 22 November 1952.

A aingle early P-80 was modified (such as a tail hook) and landed on a carrier in 1945 in trials by the Navy as a test. For land based jet training, in the late 1940s 50 P-80C (and a few A and B models) transferred to USN in 1949 as jet trainers from the air force. Under the U.S. Navy they had the designation of TO-1 later to TV-1. This resulted in the Navy operated T-33 being called the TO-2 later TV-2, though this was changed to T-33B in in 1962. None of these Navy types were carrier capable however, and were operated from land. A carrier training version of the family was developed by the 1950s, which entered service in 1957 as the T2V-1 SeaStar, redesignated T-1 SeaStar by 1962.

The costs are in approximately 1947 United States dollars and have not been adjusted for inflation.[1]

The underscored entries are deliveries of the 1714 production models, prior to any conversions or redesignations, with their original block numbers.

Lockheed also produced a two-seat trainer variant with a longer fuselage, the T-33A also known as the "T-bird", which remained in production until 1959 and was produced under license in Japan and Canada. The trainer was used by more than 20 different countries. 6,557 T-33s were built and some are still in service.

The prototype T-33 was again modified into the first F-94 Starfire, an all-weather fighter which was produced in three variants. 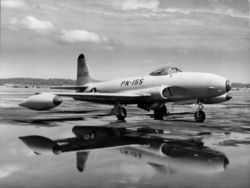 Data from Quest for Performance[7]