The Boeing 747-400 is the only model of the Boeing 747 still in production and will remain the largest commercial airliner in service until the introduction of the Airbus A380 in 2007. The 400 series 747 is the best selling and the most advanced model of the 747 family. The aircraft will be superseded by the Boeing 747-8, expected to enter service in 2009. 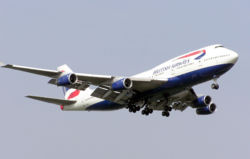 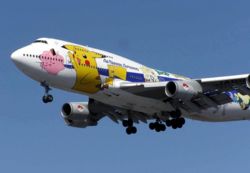 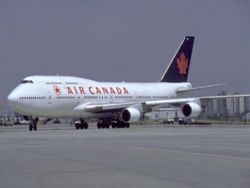 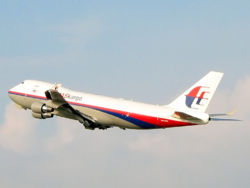 Compared to the 747-300 the 747-400 has 6 ft (2 m) wing tip extensions and 6 ft (2 m) winglets, an all-new glass cockpit which dispensed with the need for a flight engineer, tail fuel tanks, revised engines, an all-new interior, revised fuselage/wing fairings and newer in-flight entertainment to the basic design of the -300 series. Like the 747-300, the passenger version of the 747-400 included the stretched upper deck (SUD) as a standard feature. The SUD was almost twice as long as the standard upper deck; it had previously been offered as a retrofit and first appeared on two Japanese 747-100 SR models.[1] While the wingspan was increased, the overall weight of the wings was decreased due to the use of composites and aluminium alloys.

The 747-400F (Freighter) is an all freight version which uses the fuselage design of the 747-200F. The aircraft's first flight was on May 4, 1993 and it entered service with Cargolux Airlines on November 17, 1993. Major customers include Atlas Air, Cargolux, China Airlines, Korean Air, Nippon Cargo Airlines, Polar Air Cargo, and Singapore Airlines. The -400F can be easily distinguished from the passenger -400 by its shorter upper-deck hump.

The 747-400D (Domestic) is a high density seating model developed for short-haul domestic Japanese flights. Capable of seating a maximum of 568 passengers, the aircraft is the highest-capacity passenger aircraft in the world, even when the Airbus A380 officially enters service. The -400D lacks the wing tip extensions and winglets included on other variants, allowing for increased number of takeoffs and landings by lowering wing stresses; the benefits of winglets would be minimal on short routes. The -400D may be converted to the long range version when needed.

The 747-400ER includes the option of 1 or 2 additional 3240USG body fuel tanks in the forward cargo hold. Manufactured by Marshall Aerospace of Cambridge, UK, these tanks utilise cutting edge metal to metal honeycomb bonded technology to achieve an incredibly high dry weight to fuel volume ratio. Similar technology has been used in the development by Marshall of body fuel tanks for the 777-200LR and P-8A Poseidon MMA aircraft.

The new 747-8 Freighter will have more payload capacity but less range than the current 747-400ERF. 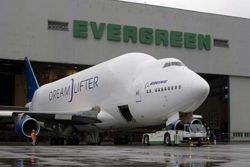 Boeing announced in October 2003 that due to the length of time of marine shipping, air transport will be the primary method of transporting parts for the Boeing 787. Pre-owned passenger 747-400 aircraft are to be converted into an outsize, "Large Cargo Freighter" configuration, in order to ferry sub-assemblies to Everett, Washington for final assembly.[2] The LCF has a bulging fuselage similar to that of the Super Guppy or Airbus Beluga cargo planes used for transporting wings and fuselage sections. The conversion, designed by Boeing's Moscow office,[3] is to be carried out in Taiwan by a subsidiary of the Evergreen Group.[4] Boeing has purchased three former China Airlines aircraft which are currently being modified.

Compared to marine shipping, delivery times for the parts built in Japan will be reduced from around 45 days to four hours with the 747 LCF.[2] The Large Cargo Freighter can hold three times the volume of a 747-400F freighter.[5][6][3] Evergreen International Airlines, which is unrelated to the Evergreen Group, will be the operator of the LCF fleet.[2][7]

The LCF is not a Boeing production model and will not be sold to any customers or see any airliner operation, and will be for Boeing's exclusive use.

This article or section does not adequately cite its references or sources.
Please help improve this article by adding citations to reliable sources. (help, get involved!)
This article has been tagged since February 2007.