Rolls-Royce plc (Template:Lse) is a British aircraft engine maker, and the second-largest in the world, behind GE Aviation. The company has related businesses in the defence aerospace, marine and energy markets.

Rolls-Royce was nationalised in 1971, by which time aircraft engines had long been the most significant part of the business. The automobile company was separated in 1973 and the present Rolls-Royce plc was re-privatised in 1987. Rolls-Royce is, through its defence aerospace division, the world's 16th largest defence contractor.[1] Defence aerospace sales accounted for 21% of group sales in 2005, civil aerospace 53%, marine 17% and energy 8%.[2] It is listed on the London Stock Exchange and is a constituent of the FTSE 100 Index.

File:London2007more img 5568.jpg
Close up of a Rolls-Royce Merlin engine

Rolls-Royce Limited was founded in 1906 by Henry Royce and C.S. Rolls, and produced its first aircraft engine in 1914.

Around half the aircraft engines used by the Allies in World War I were made by Rolls-Royce. By the late 1920s, aero engines made up most of Rolls-Royce's business. Henry Royce's last design was the Merlin aero engine, which came out in 1935 although he had died in 1933. This was a development subsequent to the R engine, which had powered a record-breaking Supermarine S6.B seaplane to almost 400mph in the 1931 Schneider Trophy. The legendary Rolls-Royce Merlin is revered as a British Icon [3]. The Merlin powered many World War II aircraft: the British Hawker Hurricane, Supermarine Spitfire, De Havilland Mosquito (twin-engined), Avro Lancaster (4-engine); it also transformed the American P-51 Mustang into one of the best fighters of its time, its Merlin engine built by Packard under licence. The early Merlins were used by the British Royal Air Force in the Hawker Hurricane and Supermarine Spitfire that won the Battle of Britain. The "Merlin engine" is often considered to be one of the main factors in winning the war for the Allies. [4] .Over 160,000 Merlin engines were produced.

In the post-World War II period Rolls-Royce made significant advances in gas turbine engine design and manufacture. The Dart and Tyne turboprop engines were particularly important, enabling airlines to cut journey times within several continents, whilst jet airliners were introduced on longer services. The Dart engine was used in Argosy, Avro 748 and its military variant the Andover, Friendship, Herald and Viscount aircraft, whilst the more powerful Tyne powered the Atlantic, Transall and the Vanguard. Many of these turboprops are still in service.

Rolls-Royce engines had traditionally borne numeric designations during development and then were assigned the name of a British river on delivery. The use of river names was introduced with the earliest Rolls jet engines to reflect their nature: a steady flow of power rather than the pulses of a piston engine. RB stands for "Rolls Barnoldswick", the latter a major ex-Rover facility bought by Rolls-Royce when it traded production of engines (the Rolls-Royce Meteor) for production of the first Whittle engines.

Amongst the jet engines of this period was the RB163 Spey which powers the Trident, BAC 1-11, Grumman Gulfstream II and Fokker F28. Military versions of the Spey powered the Buccaneer S2 for the RAF, the Phantom F4K and F4M, and the Nimrod. The Spey was licence built by Allison Engine Company as the TF41 for the A-7 Corsair II. Other types of military engines produced in the second half of the 20th Century include the Avon and Viper; these engines powered many of the British Aircraft of this period.

Also of this period was the Conway, a low (by today's standards) bypass ratio turbofan which was used on some Boeing 707s and Douglas DC-8s, and all Vickers VC10s as well as on the MkII variant of the Handley Page Victor bomber for the RAF.

During the late 1950s and '60s there was a significant rationalisation of the British aero-engine manufacturers, culminating in the merger of Rolls-Royce and Bristol Siddeley in 1966. Bristol Siddeley, which had itself resulted from the merger of Armstrong Siddeley and Bristol in 1959, and with its principal factory at Filton, near Bristol, had a strong base in military engines, including the Olympus, which was chosen for Concorde.

Having been selected as the sole engine supplier for the Lockheed L-1011 (TriStar), Rolls-Royce committed heavily to the RB211 engine, but its development was hampered by considerable problems and on February 4 1971 Rolls-Royce went into administrative receivership. To save the company, Edward Heath's government nationalised it. The automotive division was separated from the aircraft engine division in 1973 as Rolls-Royce Motors and sold to Vickers. A side-effect of this affair was a change in accounting regulations to forbid the capitalisation of expenditure on research. This practise had resulted in Rolls-Royce massively overstating its assets, thus disguising its financial difficulties until it was too late.

Rolls-Royce plc was privatised in 1987 under the government of Margaret Thatcher. The 1980s saw the introduction of a policy to offer an engine on every civil aircraft type, with the company's engines now powering 17 different airliners (and their variants) compared to General Electric's 14 and Pratt & Whitney's 10.

In 1988, Rolls-Royce acquired Northern Engineering Industries (NEI), a group of heavy engineering companies mainly associated with electrical generation and power management, based in the North East of England. The group included Clarke Chapman (Cranes), Reyrolle (now part of Siemens) and Parsons (now part of Siemens Steam turbines). The company was renamed Rolls-Royce Industrial Power Group. It was sold off piecemeal over the next decade as the company re-focused on its core aero-engine operations following the recession of the early 1990s.

In 1990 BMW and Rolls-Royce established the BMW Rolls-Royce joint venture to produce the BR700 range of engines for regional and corporate jets, the most recent of which is the newly announced BR725 powering the Gulfstream G650. BMW subsequently withdrew from the company, and Rolls-Royce took full control of it in 2000, renaming it Rolls-Royce Deutschland.

In November 1994, Rolls-Royce announced its intention to acquire the Allison Engine Company, an American manufacturer of gas turbines and components for aviation, industrial and marine engines. Rolls-Royce had previously tried to buy the company when General Motors sold it in 1993, but GM opted for a management buyout instead. Owing to Allison's involvement in classified and export restricted technology, the 1994 acquisition was subject to investigation to determine the national security implications. On 27 March 1995 the US Department of Defense announced that the "deal between Allison Engine Co. and Rolls-Royce does not endanger national security."[5] Rolls-Royce was, however, obliged to set up a proxy board to manage Allison and had also to set up a separate company, Allison Advanced Development Company, Inc., to manage classified programmes "that involve leading-edge technologies". In 2000 this restriction was replaced by a more flexible Special Security Arrangement.

In 1996 Rolls-Royce and Airbus signed a Memorandum of Understanding specifying the Trent 900 as the engine of choice for the then A3XX, now called the Airbus A380.

Rolls-Royce spent £1.063 billion on acquisitions in 1999. These were interests of Cooper Energy Services (with the effect of making the Cooper Rolls joint venture a wholly owned subsidiary of Rolls-Royce), Vickers, National Airmotive Corporation and BMW's share of BMW Rolls-Royce.

Rolls-Royce acquired Vickers plc for its marine businesses. Vickers had expanded this part of its business in the period leading up to the purchase, acquiring Kamewa, a manufacturer of waterjets and controlled pitch propellers, in 1996, Brown Brothers, steering gear and stabilizers manufacturer and Ulstein, a major marine propulsion and engineering company, in 1998. Rolls-Royce sold Vickers Defence Systems (the other major Vickers area of business) to Alvis plc in 2002 which then became Alvis Vickers, then the largest armoured vehicle company in the UK.

Rolls-Royce has established a leading position in the corporate and regional airline sector through the development of the Tay engine, the Allison acquisition and the consolidation of the BMW Rolls-Royce joint venture. In 1999 BMW Rolls-Royce was renamed Rolls-Royce Deutschland and became a 100% owned subsidiary of Rolls-Royce plc.

On 13 June 2004, Rolls-Royce were awarded a £110m deal with the Ministry of Defence to supply engines for its C-130 Hercules transport aircraft for the next 5 years.[6]

In July 2006, Rolls-Royce reached an agreement to supply a new version of the Trent for the revised Airbus A350 (XWB) jetliner. Although details have yet to be released, it is likely that the so-called Trent XWB will be significantly larger than the Trent 1700, basically a throttle-push of the Trent 1000 intended for the original A350 proposal.

In October 2006, Rolls-Royce suspended production of its Trent 900 engine because of delays by Airbus on the delivery of the A380 superjumbo. Rolls-Royce announced in October 2007 that production of the Trent 900 had been re-started after a twelve month suspension caused by delays to the A380.[7] The plant in Derby, UK employs 11,000 workers and will continue to produce engines for Bombardier, Boeing, including those for the new 787 series and other Airbus aircraft such as the A330 and A340.

On the military side, Rolls-Royce has been (in cooperation with other European manufacturers) a major contractor for the RB199 which in several variants powers the Panavia Tornado, and also for the EJ200 engine for the Eurofighter Typhoon. Two modified RB199 engines also powered the EAP demonstrator which evolved into the Typhoon.

At the 2005 Paris Air Show, Rolls-Royce secured in excess of $1 billion worth of orders. The firm received $800m worth of orders from Air China to supply its 20 Airbus A330 jets[8].

On 18 June 2007, Rolls-Royce announced at the 2007 Paris Air Show that it had signed its biggest ever contract with Qatar Airways for the Trent XWB to power 80 A350 XWBs on order from Airbus worth $5.6 billion at list prices.[9] On 11 November 2007, another large contract was announced at the Dubai Airshow from Emirates Airline for Trent XWBs to power 50 A350-900 and 20 A350-1000 aircraft with 50 option rights. Due to be delivered from 2014, the order is potentially worth up to 8.4 billion US Dollars at list prices, including options.[10].

Rolls-Royce's aerospace business makes commercial and military gas turbine engines for military, civil, and corporate aircraft customers worldwide. In the United States, the company makes engines for regional and corporate jets, helicopters, and turboprop aircraft. Rolls-Royce also constructs and installs power generation systems. Its core gas turbine technology has created one of the broadest product ranges of aero-engines in the world, with 50,000 engines in service with 500 airlines, 2,400 corporate and utility operators and more than 100 armed forces, powering both fixed- and rotary-wing aircraft. 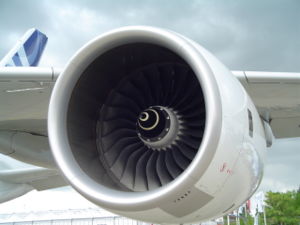