The Airbus A330 is a large-capacity, wide-body, medium-to-long-range commercial passenger airliner manufactured by EADS (Airbus S.A.S.). It was developed at the same time as the four-engined A340.

Airbus intended the A330 to compete directly in the ETOPS (Extended-range Twin-engine Operation Performance Standards) market, specifically with the Boeing 767.

The A330's fuselage and wings are virtually identical to those of the smaller A340 variants, although it has different engines. The A330 basic fuselage design is inherited from the Airbus A300, as is the nose/cockpit section and the fly-by-wire system and flightdeck from the A320. Both the A330 and A340 are assembled on the same final assembly line at Toulouse-Blagnac, France. 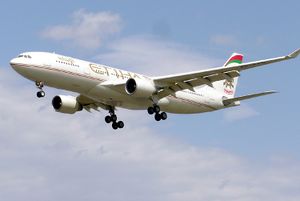 Its vertical fin is taller than that of the A330-300 to restore its effectiveness due to the fuselage shrink. It has additional fuel capacity and, like the A330-300, has a MTOW of 233 tonnes. Typical range with 253 passengers in a three-class configuration is 12,500 km (6,750 nautical miles).

The direct Boeing equivalent was originally the 767-400ER and in the future will be the 787-9. 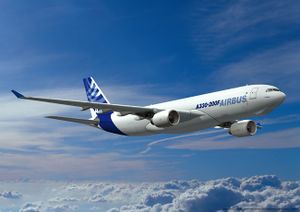 The A330-200F is a mid-size, long-haul all-cargo aircraft capable of carrying 64 tonnes over 4,000nm / 7,400 km, or 69 tonnes up to 3,200nm / 5,930 km. It introduces a new versatile main-deck cargo loading system that will be able to accommodate both pallets and containers. Several different arrangements will be possible on the main deck, taking up to 23 Side-by-Side (SBS) pallets, aimed at the high volume, high value commodities or Single Row (SR) loading of 16 pallets (96”x 96”x125” SR pallets) and/or nine AMA containers aimed at the general cargo higher density markets.

To overcome the standard A330's nose-down body angle on the ground, the A330F will make use of a revised nose landing gear layout. The same leg will be used, however it will be attached lower in the fuselage, requiring a distinctive blister fairing on the nose to accommodate the retracted nosegear. 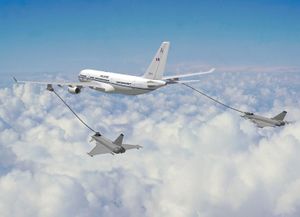 A330 MRTT with two Eurofighter Typhoons

The Airbus A330 MRTT version of the A330-200 provides aerial refueling and strategic transport. To date it has been selected by Australia and the UK.

The KC-30, a derivative of the A330 similar to the MRTT, is in the running to land a contract from the United States Air Force for perhaps up to 600 tankers to replace the aging KC-135 and KC-10 fleet. EADS is teamed with Northrop Grumman for the bid. If the contract is won, it will require EADS to invest approximately US$600 million in an assembly plant in the United States. The competing KC-767 won the original competition in 2002 however this contract was cancelled, due to a corruption scandal, in December 2003. In the new competition Airbus will face competition from both the KC-767 and a new tanker variant of the Boeing 777.

In early 2006 the United States Congress passed a defence bill which reverses an earlier amendment which barred Airbus from bidding for the contract.[3]

To support the possible USAF contract, Airbus has announced that it will create an engineering and manufacturing site at Mobile, Alabama.

The A330-300, which entered service in 1993, was developed as replacement for the A300. It is based on a stretched A300-600 fuselage but with new wings, stabilisers and new fly-by-wire software.

The A330-300 carries 295 passengers in a three-class cabin layout (335 in 2 class and 440 in single class) over a range of 10,500 km (5,650 nautical miles). It has a large cargo capacity, comparable to early Boeing 747s. Some airlines run overnight cargo-only flights after daytime passenger services.

It is powered by two General Electric CF6-80E, Pratt & Whitney PW4000 or Rolls-Royce Trent 700 engines, all of which are ETOPS-180 min rated. US Airways was the launch customer in the United States with nine A330-300s.

The direct Boeing equivalent is the Boeing 777-200. 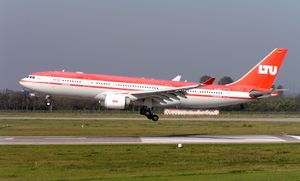 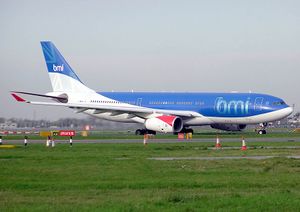 Bmi A330-200 queueing for take off at London Heathrow Airport

Wikimedia Commons has media related to:
Airbus A330