The Rolls-Royce RB211 is a family of high-bypass turbofan engines made by Rolls-Royce plc and capable of generating 37,400 to 60,600 pounds-force (166 to 270 kilonewtons) thrust. Originally developed for the Lockheed L-1011 (TriStar), it entered service in 1972 and was the only engine to power this aircraft type. Derivative versions were later produced for variants of the Boeing 747, 757 and 767, as well as the Russian Tupolev Tu-204 airliner. A version was also produced for land-based power generation. The RB211 was superseded in the 1990s by the Rolls-Royce Trent family of engines.

In 1966 American Airlines announced a requirement for a new short-medium range airliner with a focus on low-cost per-seat operations. While American were looking for a twin-engined plane, the aircraft manufacturers needed more than one customer to justify developing a new airliner. Eastern Airlines were also interested, but needed greater range and a tri-jet for its long routes over water; other airlines were also in favour of three engines. Lockheed and Douglas responded with designs, the L-1011 TriStar and DC-10 respectively. Both had three engines, a transcontinental range and seated around 300 passengers in a widebody layout with two aisles.

Both planes also required new engines. Engines were undergoing a period of rapid advance due to the introduction of the high bypass concept, which provided for greater thrust, improved fuel economy and less noise than the earlier low-bypass designs. Rolls-Royce had been working on an engine of the required 45,000 lbf (200 kN) thrust class for an abortive attempt to introduce an updated Hawker Siddeley Trident as the RB178. This work was later developed for the 47,500 lbf (211 kN) thrust RB207 to be used on the Airbus A300, before it was cancelled in favor of the RB211 programme.

Meanwhile Rolls-Royce was also working on a series of triple-spool[1] designs, which promised to deliver higher efficiencies. In this configuration, three groups of turbines spin three separate concentric shafts to power three sections of the compressor area running at different speeds. In addition to allowing each stage of the compressor to run at its optimal speed, the triple-spool design is also more compact and rigid, although more complex to build and maintain. Several designs were being worked on at the time, including a 10,000 lbf (44 kN) thrust design intended to replace the famous Rolls-Royce Spey known as the RB203.

On 23 June 1967, Rolls-Royce offered Lockheed the RB211-06 for the L-1011. The new engine was to be rated at 33,260lbf thrust and combined features of several engines then under development: the large high-power, high-bypass design from the RB207 and the triple-spool design[2] of the RB203. To this they added one totally new piece of technology, a fan stage built of a new carbon fibre material called Hyfil developed at RAE Farnborough. The weight savings were considerable over a similar fan made of steel, and would have given the RB211 an advantage over its competitors in terms of power-to-weight ratio. Despite knowing that the timescale would be challenging for an engine incorporating these new features, Rolls-Royce committed to putting the RB211 into service in 1971.[3]

Lockheed felt the new engine would offer a distinct advantage over the otherwise similar DC-10 product. However, Douglas had also requested proposals from Rolls for an engine to power its DC-10, and in October 1967 Rolls responded with a 35,400lbf thrust version of the RB211 designated the RB211-10. There followed a period of intense negotiations between airframe manufacturers Lockheed and Douglas, potential engine suppliers Rolls-Royce and General Electric and Pratt & Whitney, as well as the major US airlines. During this time prices were negotiated downwards, while the required thrust ratings were raised ever higher. By early 1968, Rolls was offering a 40,600lbf thrust engine designated RB211-18. Finally, on 29 March 1968 Lockheed announced that it had received orders for 94 TriStars, and placed an order with Rolls-Royce for 150 sets of engines designated RB211-22.[3][4]

The RB211's complexity required a lengthy development and testing period. By Autumn 1969 Rolls-Royce was struggling to meet the performance guarantees to which it had committed: the engine had insufficient thrust, was over-weight and its fuel consumption was too high. The situation deteriorated further when in May 1970 the new Hyfil fan stage, after passing every other test, shattered into pieces when a chicken was fired into it at high speed.[5] Rolls had been developing a titanium blade as an insurance against difficulties with Hyfil, but this meant extra cost and more weight. It also brought its own technical problems when it was discovered that only one side of the titanium billet was of the right metallurgical quality for blade fabrication.

In September 1970, Rolls-Royce reported to the government that development costs for the RB211 had risen to £170.3 million - nearly double the original estimate; furthermore the estimated production costs now exceeded the £230,375 selling price of each engine.[3] The project was in crisis.[6]

By January 1971 Rolls-Royce had become insolvent, and on 4 February 1971 was placed into receivership,[7] seriously jeopardizing the L-1011 TriStar program. Because of its strategic importance, the company was nationalised by the then-Conservative government of Edward Heath, allowing development of the RB211 to be completed. Because Lockheed was itself in a vulnerable position, the government required that the US government guarantee the bank loans that Lockheed needed to complete the L-1011 project.[8] Despite some opposition, the US government provided these guarantees.[9] In May 1971, a new company called Rolls-Royce (1971) Ltd. acquired the assets of Rolls-Royce from the Receiver, and shortly afterwards signed a new contract with Lockheed. This revised agreement cancelled penalties for late delivery, and increased the price of each engine by £110,000.

Kenneth Keith, the new chairman who had been appointed to rescue the company, persuaded Stanley Hooker to come out of retirement and return to Rolls. As technical director he led a team of other retirees to fix the remaining problems on the RB211-22. The engine was finally certified on 14 April 1972,[10] about a year later than originally planned, and the first TriStar entered service with Eastern Air Lines on 26 April, 1972. Hooker was knighted for his role in 1974.

The RB211's initial reliability in service was not as good as had been expected due to the focus of the development program on meeting the engine's performance guarantees. However, a programme of modifications during the first few years in service improved matters considerably, and the series has since matured into a highly reliable engine.

Although originally designed for the L-1011-1, Rolls-Royce knew that the RB211 could be developed to provide greater thrust. By redesigning the fan and the IP compressor, Hooker's team managed to increase the engine's thrust to 50,000 lbf. The new version was designated RB211-524, and would be able to power new variants of the L-1011, as well as the Boeing 747.

Rolls-Royce had tried without success to sell the RB211 to Boeing in the 1960s, but the new -524 offered significant performance and efficiency improvements over the Pratt & Whitney JT9D which Boeing had originally selected to power the 747. In October 1973 Boeing agreed to offer the RB211-524 on the 747-200, and British Airways became the first airline to order this combination which entered service in 1977. Rolls continued to develop the -524, increasing its thrust through 51,500 lbf with the -524C, then 53,000 lbf in the -524D which was certificated in 1981. Notable airline customers included Qantas, Cathay Pacific and South African Airways. When Boeing launched the larger 747-400 still more thrust was required, and Rolls responded with the -524G rated at 58,000 lbf thrust and then the -524H with 60,600; these were the first versions to feature FADEC.[11] The -524H was also offered as a third engine choice on the Boeing 767, and the first of these entered service with British Airways in February 1990.

These would have been the final developments of the -524, but when Rolls developed the successor Trent engine, it found it could fit the Trent 700's improved HP system to the -524G and -524H. These variants were lighter and offered improved fuel efficiency and reduced emissions;[12] they were designated -524G-T and -524H-T respectively. It was also possible to upgrade existing -524G/H engines to the improved -T configuration, and a number of airlines did this.[13] 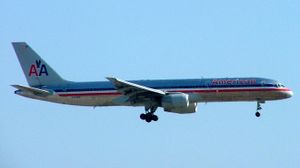 In the mid 1970s, Boeing were considering designs for a new twin-engined aircraft to replace its highly successful 727. As the size of the proposed plane grew from 150 passengers towards 200, Rolls-Royce realised that the RB211 could be adapted by cropping[15] the fan and removing the first IP compressor stage to produce an engine with the necessary 37,400 lbf thrust. The new version was designated RB211-535. On 31 August 1978 Eastern Airlines and British Airways announced orders for the new 757, powered by the -535. Designated RB211-535C, the engine entered service in January 1983; this was the first time that Rolls-Royce had provided a launch engine on a Boeing aircraft.[16]

However, in 1979 Pratt & Whitney launched its PW2000 engine, claiming 8% better fuel efficiency than the -535C for the PW2037 version. Boeing put Rolls-Royce under pressure to supply a more competitive engine for the 757, and using the more advanced -524 core as a basis, the company produced the 40,100 lbf thrust RB211-535E4 which entered service in October 1984. While still not quite as efficient as the PW2037, it was more reliable and quieter. It was also the first to use the wide chord fan which increases efficiency, reduces noise and gives added protection against foreign object damage.

Probably the most important single order came in May 1988 when American Airlines ordered 50 757s powered by the -535E4 citing the engine's low noise as an important factor: this was the first time since the TriStar that Rolls-Royce had received a significant order from a US airline, and it led to the -535E4's subsequent market domination on the 757.

After being certified for the 757, the E4 was offered on the Russian Tupolev Tu-204 airliner, entering service in 1992. This was the first time a Russian airliner had been supplied with western engines.[17] The -535E4 was also proposed by Boeing for re-engining the B-52H Stratofortress, replacing the aircraft's eight TF33s with four of the turbofans. Further upgrading of the -535E4 took place in the late 1990s to improve the engine's emissions performance, borrowing technology developed for the Trent 700.[18]

When Rolls-Royce was developing the -22, it realised that it would be straightforward to develop a version of the engine for land-based power generation, and in 1974 the industrial RB211 was launched. When the -524 arrived shortly afterwards, its improvements were incorporated in the industrial RB211 which was designated RB211-24. The generator was gradually developed over the following years[20] and is still marketed today as a range of generators producing 25.2-32MW.[21] Many of its installations have been in the offshore oil and gas production industries.[22]

The family is divided into three distinct series:

As well as a featuring a destaged IP compressor, the -535E4 was the first engine to incorporate a hollow wide chord, unsnubbered[23] fan to improve efficiency. It also featured the use of more advanced materials, including titanium in the HP compressor and carbon composites in the nacelle. Later engines incorporate some features (e.g. FADEC) from improved models of the -524.