The Boeing 767 is a commercial passenger aircraft manufactured by Boeing's Commercial Airplane division.

The Boeing 767, a widebody jet was introduced at around the same time as the 757 (its narrowbody sister), in the early 1980s. With the 707 aging, Boeing decided to offer a midsize plane to fit in between the 727/737/757 and the 747. The aircraft has a fuselage width of 15 ft 6 in (472,44 cm) that splits the difference between the aircraft in half. It is offered in a twin aisle configuration of 2+3+2 in economy with the most common business configuration of 2+2+2. It is possible in some charter configurations to squeeze an extra seat for a 2+4+2 configuration, however the seats are very narrow and this is not common.

The 767 has a seat-to-aisle ratio in economy class of 3.5 seats per aisle, making for quicker food service and quicker exit of the plane than many other jetliners, which typically have between four and six seats per aisle in economy class. The flight decks of the Boeing 757 and 767 are very similar and as a result, after a short conversion course, pilots rated in the 757 are also qualified to fly the 767 and vice versa. 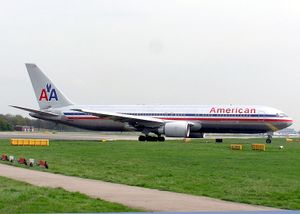 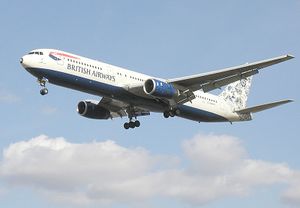 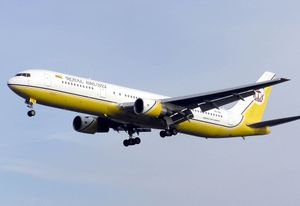 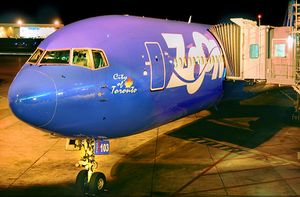 The first model of the 767, was launched in 1978 and entered service with United Airlines in 1982. This model is used mainly for continental routes such as New York to Los Angeles. The 767-200 typically is outfited with 181 seats in a 3-class layout or 224 in a 2-class layout. All -200 models have a capacity limit of 255 due to exit-door limitations.

An extended-range variant first delivered to El Al in 1984. It became the first 767 to complete a nonstop transatlantic journey, and broke the flying distance record for twinjet airliners several times. Although the 767-200ER has no direct replacement, it is expected to be replaced indirectly in Boeing's lineup by the 787-8.

Due to its unique fuselage width of 15 ft 6 in, it is unable to carry ordinary Unit Load Devices, and instead has to use specially designed air freight containers and pallets. This model has three doors on the maindeck plus 2 on the lower deck. Of the 3 doors on top, two are at the front, and one is at the rear right side. The two lower doors comprise of one at the right front and one at the rear left.

This final extended variant was launched in 1997 on an order for Delta Air Lines and Continental Airlines to replace their aging Lockheed L-1011 and McDonnell Douglas DC-10 fleets. It was again stretched 21.1 ft for a total of 201.4 ft. It also saw a wingspan increase of 14.3 feet over the previous two models and is the only 767 model to also feature "raked" wingtips, which increase fuel efficiency. It was introduced into service in 2000. This model is only available as the 767-400ER. However it has less range than the other two ER variants. The 767-400ER is expected to be replaced by the 787-9 in Boeing's lineup.

Boeing discussed extending the range further but the proposed 767-400ERX was not launched. It was introduced along with the Boeing 747X and was to be powered by Boeing 747X Engines (Engine Alliance GP7172 and Rolls Royce plc Trent 600).[1] It would have combined the 767-400ER's size with the range of a 767-300ER. Kenya Airways showed strong interest in this model to supplement their 767 fleet. However, in the end, Kenya Airways favored the 777-200ER, eschewing the 767-400ERX altogether.

Versions of the 767 serve prominently in a number of military applications. Most military aircraft derive from the 767-200ER.

The Airborne Optical Adjunct (AOA) was built from the prototype 767-200. The aircraft was later renamed the Airborne Surveillance Testbed (AST). Modifications to the aircraft included a large "cupola" or hump which ran along the top of the aircraft from above the cockpit to just behind the trailing edge of the wings. Inside the cupola was a suite of infrared seekers that were used to track theater ballistic missle launches in a series of tests.[3] The aircraft remains in storage at the Victorville Airport in California.

The E-767 AWACS platform is used by the Japan Self-Defense Forces; it is essentially the E-3 Sentry mission package on a 767-200ER platform.

The KC-767 was developed for the USAF Commercial Derivative Air Refuelling Aircraft program to replace some of its oldest KC-135E tankers. Boeing won the competition and the aircraft was designated KC-767A. The USAF planned to lease the KC-767s, however, the Pentagon suspended the program due to a conflict of interest scandal. In 2006, Secretary of Defense Donald Rumsfeld cancelled the KC-767 lease.

The KC-767 Tanker Transport is a 767-200ER-based aerial refueling platform for the Italian Air Force and the Japan Self-Defense Forces, which have designated it KC-767J.

On February 12, 2007, Boeing announced it is offering the KC-767 Advanced Tanker in the KC-X Tanker competition. The version being offered for the competition will be based on the in-development 767-200LRF (Long Range Freighter), rather than the -200ER.[4][5]

The E-10 MC2A is a 767-400ER-based replacement for the Boeing 707-based E-3 Sentry AWACS, the E-8 Joint STARS aircraft, and EC-135 ELINT aircraft. This is an all-new system, with a powerful Active Electronically Scanned Array and not based upon the Japanese AWACS aircraft. 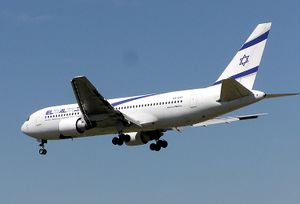 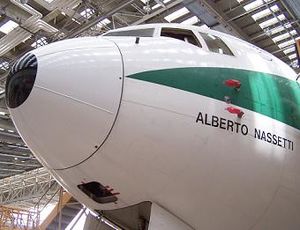