The Airbus A330 Multi Role Tanker Transport (MRTT) is an aerial refueling tanker aircraft based on the civilian A330-200 of the early 21st century.

One of the attributes of the A330 as a tanker aircraft is its large internal fuel capacity. The 111,000 kg / 122 tons of fuel is held in the wings, which leaves the lower deck available for cargo. Fuel capacity can be further increased with underfloor tanks, which would not compromise main deck cargo capacity or seating for strategic transport. Another major benefit of the A330 MRTT is the fact that the two engine A330 shares the same wing with the four engined A340-200/-300. This allows the A330 MRTT to use the two extra hardpoints of the A340 wing for the placement of refueling pods.

The A330 MRTT has been selected by the Royal Australian Air Force (RAAF) (5 aircraft), as well as the UK under the RAF's Future Strategic Tanker Aircraft (FSTA) project, to take the place of older tanker aircraft. In both cases beating off competition from the Boeing 767 AAR derivative. The RAF is seeking to replace their ageing Vickers VC10 and Lockheed Tristar based tankers, while the RAAF is replacing their veteran 707 tanker/transports.

The RAF aircraft will operate solely in the probe and drogue role, while Australia's five airframes will also be equipped with a refueling boom. Australia was initially to procure four aircraft with an option to obtain a fifth, however the RAAF has since decided to go ahead with the procurement of the fifth aircraft to allow for two simultaneous deployments of two aircraft, with the fifth providing contingency cover. All of Australia's Airbus A330 MRTT aircraft will be operated by No. 33 Squadron RAAF based at RAAF Base Amberley. The Australian aircraft will be designated KC-30B Multi-Role Tanker Transports.[1]

In January 2004 the UK Ministry of Defence announced that the A330 MRTT had been selected to provide air-refueling for the RAF for the next 30 years under the Future Strategic Tanker Aircraft programme. The UK Ministry of Defence then began exclusive negotiations with the Airtanker consortium. However, beginning in April 2004, there have been continuing rumours on the fragile state of the contract negotiations. This culminated in an ultimatum by the UK's Defence Procurement Agency, delivered to EADS, demanding a reduced price for the aircraft.

With continuing doubts over the FSTA programme, Marshall Aerospace — which is responsible for the original conversion of L-1011 Tristars to tankers for the RAF — has offered to buy and convert some of the large number of retired commercial L-1011’s to tanker aircraft. This would give the RAF a much needed increase in capacity (with the upcoming retirement of the VC10 fleet) at a fraction of the cost of the £13Bn FSTA project.

As an interim service, pending delivery of the FSTA, Omega Airhas offered to make available to the RAF, a number of KDC-10 Tanker Transport aircraft. Omega Air has developed their own three point tanker version of the DC-10 (see also KC-10 Extender). The company has provided "Turn-key" aerial refueling services to the U.S. Navy for more than 5 years.

The Airbus A330 MRTT has been marketed to the USAF by EADS and Northrop Grumman as the KC-30. It has primarily competed with the KC-767, which is a smaller aircraft (can hold about 20 percent less fuel), less cargo, but is also cheaper (about 120 million vs 160 million 2005 US dollars). On the other hand, the KC-30 itself in turn holds less fuel and cargo, but is cheaper than the developmental KC-777.

The U.S. Air Force (USAF) ran a procurement program to replace around 100 of their oldest KC-135E Stratotankers. Most USAF KC-135s are of the updated KC-135R Stratotanker variant.

Northrop Grumman and EADS offered the A330 MRTT. The KC-767 was selected, but he USAF ended up cancelling the KC-767 order when the deal became embroiled it a political controversy due to the nature of lease agreement. Rather than buying the tankers out right, the Air Force was going to lease the aircraft, which became a source a criticism; that the lease was not a good deal for taxpayers.

In December 2003 the US Defense Department announced the project was to be frozen while allegations of corruption by one if its former procurement staffers, Darleen Druyun (who had moved to Boeing in January) was investigated and eventually sentenced to nine months in jail as part of a plea agreement for "negotiating a job with Boeing at the same time she was involved in contracts with the company" [2] The controversy was not simply that Boeing was selected, but the nature of the contract with Boeing was not fair to the taxpayer. On technical merits the choice, though often debated, is alleged to be reasonable. Of particular note is that other Air Forces that already operated the basic 757/767 airframe also chose the 767 for commonality, such as Japan.

Among the USAF rationales alleged by others for rejecting the A330, was that Airbus lacked experience in refuling aircraft. Since then, Airbus has been selected by both the UK and Australia, and EADS will have had operational experience of their refueling booms, those booms being flight tested on the Airbus A310 MRTT first. However, this is amount of use is small compared to Boeing which has over 50 years of experience with refueling booms. Nevertheless, the KC-30, as it is marketed, may build on the success of EADS in the U.S market as demonstrated by other EADS products such as the UH-72 Lakota. 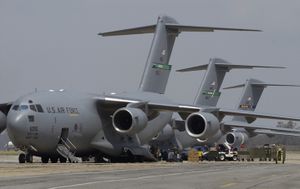 Unlike other Air Forces that procured the A330 MRTT, the USAF has hundreds of dedicated strategic transport aircraft.

During the 2004 Farnborough Air Show, US Air Force Secretary James Roche stated that a further bid from EADS would be "welcome." It remains to be seen whether this is actual change in the Air Force’s attitude towards the European manufacturer, or an attempt to influence any future negotiations with Boeing. In early 2006 the United States Congress passed a defense bill which reverses an earlier amendment which barred Airbus from bidding for the contract.[3]

In 2006 the USAF released a RFP for a new tanker aircraft, to be selected by 2007, which was updated in January, 2007, to the KC-X RFP, one of three acquisition programs that are intended to replace the entire KC-135 fleet.[4] EADS is again in a partnership with Northrop Grumman marketing the aircraft as the KC-30 to the USAF. It is competing against the KC-767, and possibly a recently announced "KC-777".

Should Northrop Grumman/EADS win the U.S. Air Force contract, it would be required to invest approximately US$600 million in a new assembly plant in the United States, which is currently planned for Mobile, Alabama.

Northrop and EADS threatened to withrdraw from the bid if it was not favorable for the KC-30 in mid January 2007. On January 8th 2007 the Wall Street Journal said "U.S. defense contractor Northrop Grumman is threatening to withdraw its bid to supply the U.S. Air Force with a new generation of mid-air refueling tanker jets." [5] Northrop spokesman Randy Belote, wanted it (the earlier RFP) to reflect a need for the KC-30's additional cargo and fuel capacity, and if it is not changed, Belote said, "then we feel we would not be competitive and we would not bid."[6] In response, another article notes, "The Air Force leaders are furious, because they feel they have bent over backwards to accommodate Northrop."[7]

On February 9, 2007 Northrop Grumman announced it would bid on the RFP in a press release. The corporate vice president of Northrop Grumman stated, "We appreciate the Air Force acquisition authority's process transparency and invitation for industry dialogue which have resulted in this very comprehensive, capabilities-based final request for proposal."

For an explanation of the units and abbreviations in this list, please see Wikipedia:WikiProject Aircraft/Units key.