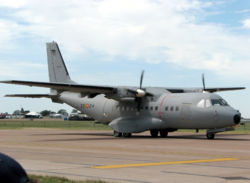 The CN-235 is a medium-range turbo-prop aircraft developed jointly between CASA in Spain and IPTN in Indonesia as a regional airliner and military transport. Amongst its military roles are maritime patrol, surveillance and troop transport.

It was purchased by the U.S. Coast Guard as the HC-144A for its Medium Range Surveillance Maritime Patrol Aircraft (MRSMPA) program.[1] The first HC-144A was delivered by EADS CASA to Lockheed Martin for installation of the mission package in December 2006.[2]