From PlaneSpottingWorld, for aviation fans everywhere
Jump to:navigation, search
This article is about the straight-winged version of the F-84. For the swept-winged version, see F-84F Thunderstreak.

In 1944, Republic Aviation's chief designer, Alexander Kartveli, began working on a turbojet-powered replacement for the P-47 Thunderbolt piston-engined fighter. The initial attempts to redesign the P-47 to accommodate a jet engine proved futile due to the large cross-section of the early centrifugal compressor turbojets. Instead, Kartveli and his team designed a brand-new aircraft with a streamlined fuselage largely occupied by an axial compressor turbojet engine and fuel stored in rather thick unswept wings.[1] On 11 September 1944, the United States Army Air Forces released General Operational Requirements for a day fighter with a top speed of 600 mph (521 knots, 966 km/h), combat radius of 705 miles (612 nm, 1,135 km), and armament of either six 0.50 inch (12.7 mm) or four 0.60 inch (15.2 mm) machine guns. In addition, the new aircraft had to use the General Electric TG-180 axial turbojet which entered production as Allison J35. On 11 November 1944, Republic received an order for three prototypes of the new XP-84.[1]

Since the design promised superior performance to the P-80 Shooting Star and Republic had extensive experience in building single-seat fighters, no competition was held for the contract. The name Thunderjet was chosen to continue the Republic Aviation tradition started with the P-47 while emphasizing the new method of propulsion. On 4 January 1945, even before the aircraft took to the air, the USAAF expanded its order to 25 service test YP-84A and 75 production P-84B (later modified to 15 YP-84A and 85 P-84B). Meanwhile, wind tunnel testing by the National Advisory Committee for Aeronautics revealed longitudinal instability and buckling of stabilizer skin at high speeds.[1] The weight of the aircraft, a great concern given the low thrust of early turbojets, was growing so quickly that the USAAF had to set a gross weight limit of 13,400 pounds (6,078 kg). The results of preliminary testing were incorporated into the third prototype, designated XP-84A, which was also fitted with a more powerful J35-GE-15 engine with 4,000 pound-force (17.80 kN) of thrust.[1]

The first prototype XP-84 was transferred to Muroc Army Air Field (present-day Edwards Air Force Base) where it flew for the first time on 28 February 1946 with Major William A. Lien at the controls. It was joined by the second prototype in August; both aircraft flying with J35-GE-7 engines producing 3,745 pound-force (16.66 kN) of thrust. The fifteen YP-84As delivered to Patterson Field (present-day Wright-Patterson Air Force Base) for service tests differed from XP-84s in having an upgraded J35-A-15 engine, carrying six 0.50 inch (12.7 mm) Browning machine guns (four in the nose and one in each wing root), and having the provision for wingtip fuel tanks holding 226 US gallon (870 L) each. Due to delays with delivery of jet engines and production of the XP-84A, the Thunderjet had undergone only limited flight testing by the time production P-84Bs began to roll out of the factory in 1947. In particular, the impact of wingtip tanks on aircraft handling was not thoroughly studied which proved problematic later.[1]

After creation of United States Air Force by the National Security Act of 1947, the Pursuit designation was replaced with Fighter, and P-84 became the F-84.

The F-84B, which differed from YP-84A only in having faster-firing M3 machine guns, became operational with 14th Fighter Group at Dow Field, Bangor, Maine in December 1947. Flight restrictions followed immediately, limiting maximum speed to Mach 0.8 due to control reversal, and limiting maximum acceleration to 5.5 Gs due to wrinkling of fuselage skin. To compound the problem, parts shortages and maintenance difficulties earned the aircraft the nickname "Mechanic's Nightmare".[1] On 24 May 1948, the entire F-84B fleet was grounded due to structural failures.

A 1948 review of the entire F-84 program discovered that none of the F-84B or F-84C aircraft could be considered operational or capable of executing any aspect of their intended mission. The program was saved from cancellation by the fact that the F-84D, whose production was well underway, had satisfactorily addressed the major faults. A fly-off against the F-80 revealed that while the Shooting Star had a shorter takeoff roll, better low altitude climb rate and superior maneuverability, the F-84 could carry a greater warload, was faster, had better high altitude performance and greater range.[1] As a temporizing measure, the USAF in 1949, committed US$8 million to implement over 100 upgrades to all F-84Bs, most notably reinforcing the wings. Despite the resultant improvements, the F-84B was withdrawn from active duty by 1952.[1]

The F-84C utilized a somewhat more reliable J35-A-13 engine and some engineering refinements. Being virtually identical to the F-84B, the C model suffered from all of the same defects and underwent a similar structural upgrade program in 1949. All F-84Cs were withdrawn from active service by 1952.[1]

The structural improvements were factory-implemented in the F-84D which entered service in 1949. Wings were covered with thicker aluminum skin, the fuel system was winterized and capable of using JP-4 fuel and a more powerful J35-A-17 engine with 5,000 pound-force (22.24 kN) thrust was fitted. It was discovered that the untested wingtip fuel tanks contributed to wing structural failures by inducing excessive twisting during high-G maneuvers.[1] To correct this, small triangular fins were added to the outside of the tanks. The F-84D was phased out of USAF service in 1952 and left Air National Guard service in 1957.[1]

The first effective and fully-capable Thunderjet was the F-84E model which entered service in 1949. The aircraft featured the J35-A-17 engine, further wing reinforcement, a 12 inch (30 cm) fuselage plug in front of the wings and 3 inch (76 mm) plug aft of the wings to enlarge the cockpit and the avionics bay, an A-1C gunsight with APG-30 radar and provision for an additional pair of 230 US gallon (871 L) fuel tanks to be carried on underwing pylons.[1] The latter increased the combat radius from 850 to 1,000 miles (740 to 870 nm, 1,370 to 1,610 km). Despite the improvements, the in-service rates remained poor with less than half of the aircraft operational at any given time.[1] This was primarily due to severe shortage of spares for the Allison engines. The expectation was that F-84Es would fly 25 hours per month, accumulating 100 hours between engine overhauls. The reality of Korean War and NATO deployments rapidly outpaced the supply and Allison's ability to manufacture new engines.[1] The F-84E was withdrawn from USAF service in 1956, lingering with ANG units until 1959.

The definitive straight-wing F-84 was the F-84G which entered service in 1951. The aircraft introduced a refueling boom receptacle in the left wing, autopilot, Instrument Landing System, J35-A-29 engine with 5,560 pound-force (24.73 kN) of thrust, and the ability to carry a single Mark 7 nuclear bomb.[1] The F-84G was retired from USAF in the mid-1960s.

Typical of most early jets, the Thunderjet's takeoff performance left much to be desired. In hot Korean summers with a full combat load, the aircraft routinely required 10,000 feet (3,050 m) of runway for takeoff even with the help of RATO bottles (two or four of these were carried, each producing 1,000 pound-force (4.45 kN) of thrust for 14 seconds).[1] All but the lead aircraft had their visibility obscured by the thick smoke from the rockets. Early F-84s had to be pulled off the ground at 140 knots (160 mph, 260 km/h) with the control stick held in the rearmost position. Landings happened at a similar speed (for comparison, the P-51 Mustang landed at approximately 100 knots (120 mph, 190 km/h)). Despite the "hot" landing speeds, the Thunderjet was easy to fly on instruments and crosswinds did not present much of a problem.[3]

Thanks to the thick straight wing, the Thunderjet, which was otherwise blessed with good aerodynamics, rapidly reached its Mach 0.82 limitation at full throttle and low altitude. The aircraft had sufficient power to fly faster but exceeding the Mach limit at low altitudes resulted in a violent pitch-up and structural failure causing the wings to fall off.[3] Above 15,000 feet (4,600 m), the F-84 could be flown faster but at the expense of severe buffeting. Fortunately, the airspeed was sufficiently easy control to make safe dive bombing from 10,000 feet (3,000 m) possible.[3] The top speed limitation proved troublesome against Soviet Mikoyan-Gurevich MiG-15s in Korea. Slower than the MiG, the F-84 was also unable to turn tightly with a maximum instantaneous-turn load of only 3 Gs followed by rapid loss of airspeed. One F-84E pilot credited with two MiG kills achieved his second victory by intentionally flying his aircraft into pitch-up.[3] The MiGs chasing him were unable to follow the violent maneuver and one crashed into the ground. Luckily for the pilot, the aircraft did not disintegrate but the airframe did suffer heavy warping. The F-84 was a stable gun platform and the computing gunsight aided in accurate gunnery and bombing. Pilots praised the aircraft for Republic's legendary ruggedness.[3]

Pilots nicknamed the Thunderjet "The Lead Sled."[2] It was also called "The Iron Crowbar," "a hole sucking air," "The Hog " ("The Groundhog"), and "The World's Fastest Tricycle" as a testament to its long takeoff rolls.[2] F-84 lore stated that all aircraft were equipped with a "sniffer" device that, upon passing V2, would look for the dirt at the end of the runway. As soon as the device could smell the dirt, the controls would turn on and let the pilot fly off the ground. In the same vein, it was suggested a bag of dirt should be carried in the front landing gear well. Upon reaching V2, the pilot would dump the dirt under the wheels, fooling the sniffer device.[2]

The Thunderjet had a distinguished record during the Korean War. Although the F-84B and F-84C could not be deployed because their J35 engines had a service life of only 40 hours, the F-84D and F-84E entered combat with 27th Fighter Escort Group on 7 December 1950.[1] The aircraft were initially tasked with escorting the B-29 Superfortress bombers. The first Thunderjet air-to-air victory was scored on 21 January 1951 at the cost of two F-84s.[2] The F-84 was a generation behind the swept-wing Soviet Mikoyan-Gurevich MiG-15 and outmatched, especially when the MiGs were flown by Soviet pilots, and the MiG counter-air mission was soon given to the F-86 Sabre. Like its famous predecessor, the P-47, the F-84 switched to the low-level interdiction role at which it excelled. 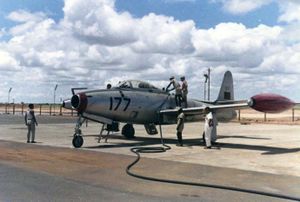