From PlaneSpottingWorld, for aviation fans everywhere
(Redirected from F-84 Thunderstreak)
Jump to:navigation, search
This article is about the swept-winged version of the F-84. For the straight-winged version, see F-84 Thunderjet. 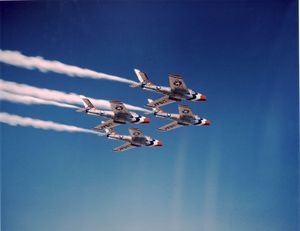 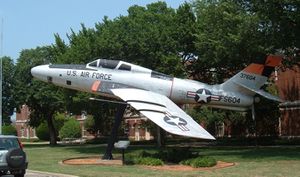 In 1949, Republic created a swept wing version of the F-84 hoping to bring performance to the F-86 level. The last production F-84E was fitted with a swept tail, a new wing with 38.5 degrees of leading edge sweep and 3.5 degrees of anhedral, and a J35-A-25 engine producing 5,300 pound-force (23.58 kN) of thrust.[1] The aircraft, designated XF-96A flew on 3 June 1950 with Otto P. Haas at the controls. Although the airplane was capable of 602 knots (693 mph, 1,115 km/h), the performance gain over the F-84E was considered minor.[1] Nonetheless, it was ordered into production in July 1950 as the F-84F Thunderstreak. The F-84 designation was retained because the fighter was expected to be a low-cost improvement of the straight-wing Thunderjet with over 55 percent commonality in tooling.[1] In the meantime, USAF arranged for the British Armstrong Siddeley Sapphire turbojet to be built in the United States as the Wright J65 in the hopes that the more powerful engine would improve high-altitude performance. To accommodate the larger engine, YF-84F with a British-built Sapphire as well as production F-84Fs with J65 had a vertically stretched fuselage with the air intake attaining an oval cross-section. Production delays with the F-84F forced USAF to order a number of straight-wing F-84Gs as an interim measure.[1]

Production quickly ran into problems. Although tooling commonality with the Thunderjet was supposed to be 55 percent, in reality only 15 percent of tools could be reused.[1] To make matters worse, the F-84F utilized press-forged wing spars and ribs. At the time, only three presses in United States could manufacture these and the priority was given to the B-47 Stratojet bomber.[1] The YJ65-W-1 engine was considered obsolete and the improved J65-W-3 did not become available until 1954. When the first production F-84F finally flew on 22 November 1952, it differed from the service test aircraft in having a different canopy which opened up and back instead of the sliding to the rear as well as airbrakes on the sides of the fuselage instead of the bottom of the aircraft.[1] The aircraft was considered not ready for operational deployment due to control and stability problems. Since early aircraft suffered from accelerated stall pitch-up, F-84F-25-RE introduced an all-moving tailplane. A number of aircraft were also retrofitted with spoilers for improved high-speed control. As the result, the F-84F was not declared operational until 12 May 1954.[1]

Project Run In operational tests completed in November 1954 finally found the aircraft to be to USAF satisfaction and considerably better than the F-84G. However, ongoing engine failures resulted in the entire fleet being grounded in early 1955. Furthermore, the J65 continued to suffer from flameouts when flying through heavy rain or snow.[1] As the result of the delays, the active duty phaseout began almost as soon as the F-84F entered service in 1954, and was completed by 1958. Increased tensions in Germany associated with construction of the Berlin Wall in 1961 resulted in reactivation of the F-84F fleet. In 1962, the fleet was grounded due to corrosion of control rods and a total of 1,800 man hours was expended to bring each aircraft to full operational capacity.[1] The aircraft were finally retired in 1964. Stress corrosion forced retirement of ANG F-84Fs in 1971. 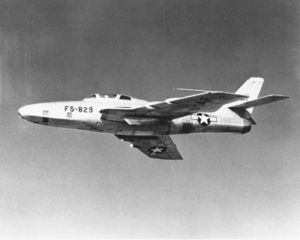 The second YF-84F prototype was completed with wing-root air intakes which were not adopted for the fighter due to loss of thrust. However, this arrangement permitted placement of cameras in the nose and the design was adopted for the RF-84F Thunderflash reconnaissance version. The first YRF-84F was completed in February 1952.[1] The aircraft retained an armament of four machine guns and could carry up to fifteen cameras. Innovations included computerized controls which adjusted camera settings for light, speed, and altitude, a periscope to give the pilot better visualization of the target, and a voice recorder to let the pilot narrate his observations. Being largely identical to the F-84F, the Thunderflash suffered from the same production delays and engine problems, delaying operational service until March 1954. The aircraft was retired from active duty in 1957, only to be reactivated in 1961, and finally retired from ANG in 1972.[1]

Several modified Thunderflashes were used in the FICON project.

The Thunderstreak suffered from the same poor takeoff performance as the straight-wing Thunderjets in spite of having a more powerful engine. In reality, almost 700 pound-force (3.11 kN) or 10 percent of total thrust was lost because the J65 was installed at an angle and its exhaust had a prominent kink. On a hot day, 7,500 feet (2,285 m) of runway were required for takeoff roll.[2] A typical takeoff speed was 160 knots (185 mph, 300 km/h).[2] Like the Thunderjet, the Thunderstreak excelled at cruise and had predictable handling characteristics within its performance envelope. Like its predecessor, it also suffered from accelerated stall pitch-up and potential resulting separation of wings from the airplane. In addition, spins in the F-84F were practically unrecoverable and ejection was the only recourse below 10,000 feet (3,000 m).[2]

With the appearance of the F-105 Thunderchief, the Thunderstreak became known as the Thud's Mother.[2] 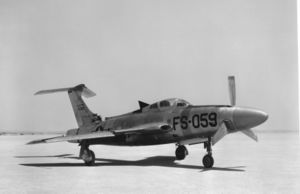 YF-84F
Two swept-wing prototypes of the F-84F.
F-84F Thunderstreak
Swept wing version initially designated F-96. Wright J65 engine, Tactical Air Command aircraft were equipped with Low-Altitude Bombing System (LABS) for delivering nuclear bombs. 2,711 built, 1,301 went to NATO under Mutual Defense Assistance Program (MDAP).
GRF-84F
25 RF-84Fs were converted to be carried, and launched from the bomb-bay of a GRB-36F bomber as part of the FICON project. The aircraft were later redesignated RF-84K.
RF-84F Thunderflash
Reconnaissance version of the F-84F, 715 built.
XF-84H
Two F-84Fs were converted into experimental aircraft. Each was fitted with a Allison XT40-A-1 turboprop engine of 5,850 shaft horsepower (4,365 kW) driving a supersonic propeller. Ground crews dubbed the XF-84H, the Thunderscreech due to its extreme noise level.[1]
YF-84J
Two F-84Fs were converted into YF-84J prototypes with enlarged nose intakes and a deepened fuselages for the General Electric J73 engine; the YF-84J reached Mach 1.09 in level flight on 7 April 1954.[1] The project was cancelled due to the excessive cost of conversion of existing F-84Fs. 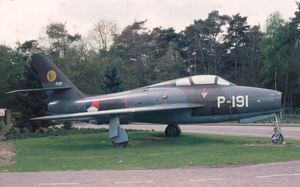 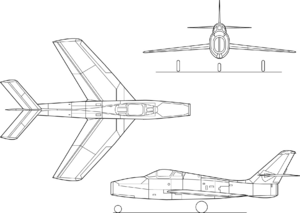 Data from Fighters of the United States Air Force[3]