The Northrop XP-79 Flying Ram was an ambitious American design for a flying wing fighter aircraft; it had several notable design features. Among these, the pilot would operate the aircraft from a prone position – permitting the pilot to withstand much greater g-forces.

In January 1943, a contract for three prototypes designation XP-79 was issued by the USAAF.

To test the radical design, glider prototypes were built. One designated MX-324 was towed into the air on 5 July, 1944 by a P-38 making it the first rocket-powered aircraft built by America to fly.[1] 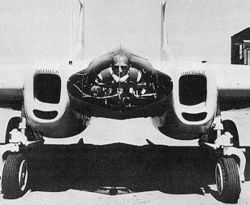 Originally it was planned to use a 2,000 lbf (9 kN) thrust XCALR-2000A-1 rocket motor supplied by Aerojet that used monoethyl aniline and a red fuming nitric acid, because of the corrosive and toxic nature of the liquids, the XP-79 was built using a welded magnesium alloy monocoque structure (to protect the pilot if the plane was damaged in combat) with a 1/8 inch (3 mm) skin thickness at the trailing edge and a 3/4 inch (19 mm) thickness at the leading edge. However, the rocket motor was unsatisfactory and the aircraft was fitted with two Westinghouse 19-B (J30) turbojets instead. This lead to changing the name to XP-79B. After the failure of the rocket motor, the first two prototypes were cancelled.

Perhaps the most interesting design idea of the XP-79, and the feature which earned it the nickname "Flying Ram" was the reinforced leading edges on the wings. It was envisioned that the XP-79 might actually employ the combat tactic of deliberately colliding with enemy aircraft — perhaps diving into them from above. The idea was that the reinforced XP-79 would slice through the enemy aircraft, perhaps at the wing or tailboom, causing it to crash, but that the XP-79 itself would survive the encounter.

The pilot controlled the XP-79 through a tiller bar and rudders mounted below; intakes mounted at the wingtips supplied air for the unusual bellows-boosted ailerons.[2]

The XP-79 project (after delays because of bursting tires on taxiing trials on the Muroc Dry Lake) met its own doom on 12 September, 1945 on its maiden flight when after a normal takeoff the single prototype entered an uncontrollable spin 15 minutes into the flight and was lost, killing test pilot Harry Crosby (who was almost killed in a similar crash in the MX-324 two years earlier) when he was unable to bail out safely. Shortly thereafter, the project was cancelled.