The Boeing F/A-18E/F Super Hornet is a carrier-based fighter/attack aircraft that entered service in 1999 with the United States Navy. It is a larger and more advanced development of the F/A-18C/D Hornet.

The Super Hornet is a growth variant on the F/A-18C/D Hornet. The Super Hornet was ordered from McDonnell Douglas by the U.S. Navy in 1992, first flew in November 1995, made its first carrier landing in 1997 and entered service in 1999. Current versions include the F/A-18E single-seater and F/A-18F two-seater. 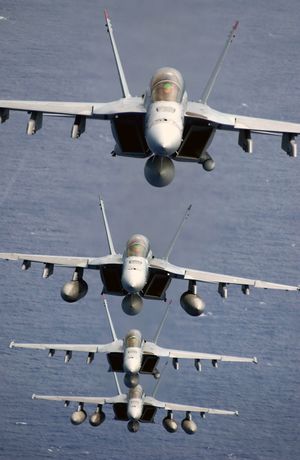 Despite the same general layout and systems, there are many differences from the original F/A-18 Hornet. The Super Hornet is informally referred to as the "Rhino" to distinguish it from earlier model "legacy" Hornets. The "Rhino" reference is important for safe aircraft carrier flight operations. For example; so that the arrestor cables are set correctly for the higher landing weight of a Super Hornet.

The early 1990s brought a number of problems for US naval aviation. The A-12 Avenger II program, intended to replace the obsolete A-6 Intruders and A-7 Corsair IIs, had run into serious problems and was cancelled. The Gulf War revealed that the US Navy's strike capability lagged behind that of the US Air Force in certain respects. With no clean-sheet program likely to produce results before about 2020, updating an existing design became an attractive approach. As an alternative to the A-12, McDonnell Douglas proposed the "Super Hornet" (or, initially, "Hornet II"), originally put forward in the 1980s to improve early F/A-18 models,[2] and serve as an alternate replacement for the A-6 Intruder which has a greater range / payload than the A-7 Corsair that the original Hornet was designed to replace.

At the same time, the Navy needed a fleet defense fighter to replace the canceled NATF, which was a proposed navalized variant of the F-22 Raptor. The Navy would also direct that this plane replace the aging F-14D Tomcat, essentially basing all naval combat jets on Hornet variants until the introduction of the F-35C Lightning II.[3] The Navy retained the F/A-18 designation to sell the program to Congress as a low-risk "derivative", though the Super Hornet is essentially a new aircraft with little more than an aerodynamic resemblance with previous Hornets.[4]

The U.S. Navy's F-14 squadrons have converted to the Super Hornet, which is also taking on the missions of the retired A-6 Intruder, S-3 Viking, and KA-6D. An electronic warfare variant, the EA-18G Growler, will replace the aging EA-6B Prowler. The Navy calls this reduction in aircraft types a "neck-down". In the Vietnam War, the Super Hornet type missions were covered by no less than the A-1/A-4/A-7 (light attack), A-6 (medium attack), F-8/F-4 (fighter), RA-5C (recco), KA-3/KA-6 (tanker) and EA-6 (electronic warfare). It is anticipated that $1 billion in fleetwide annual savings will result from replacing other types with the Super Hornet.[5] Only the turboprop and rotor-wing aircraft roles will not be covered by the Hornet. 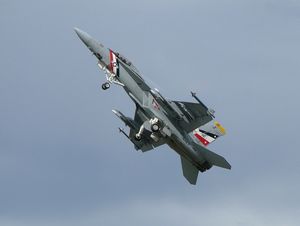 The design of the Super Hornet may have gone through a more extensive evolution than any other combat aircraft. The F-5 Freedom Fighter donated its basic wing platform, enlarged wing root extensions, and nose as the starting point for the Northrop YF-17 Cobra lightweight fighter.[6] The YF-17 was then sized up to produce the middle-weight F/A-18 multirole fighter, which roughly matched the Phantom in range/payload and missile armament. The Super Hornet is about 20% larger, 7,000 lb heavier empty, and 15,000 lb heavier at maximum weight than the original Hornet. Although the original YF-17 was about the same weight as the small F-5, the Super Hornet carries 33% more internal fuel, increasing mission range by 41% and endurance by 50% over the "Legacy" Hornet. The Super Hornet weighs 8% more empty than the original F-15C, which has itself been criticized for its large size. The Super Hornet is about 10,000 lb lighter than the F-14 Tomcat that was judged too expensive and large for a low-cost fighter, and even heavier than the original naval TFX specification that helped down the F-111B. 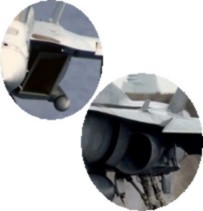 The wing, center and aft fuselage, tail surfaces and power plants are entirely new. The Super Hornet has a 25% larger wing. The fuselage was stretched to carry more fuel and room for future avionics upgrades. An engine with 35% more power, the General Electric F414, was developed to power this larger, heavier aircraft. The aircraft can carry five 440 US gallon (1,700 liter) external fuel tanks for long-distance ferry flights or four tanks plus an Aerial Refueling Store (ARS), or "buddy store", which allows the Super Hornet to refuel other aircraft. The Super Hornet can return to an aircraft carrier with a larger load of unspent fuel and munitions. The term for this ability is known as "bringback". Bringback for the Super Hornet is in excess of 9,000 pounds.[7]

Other differences include angular intakes for the engines, a smaller radar cross section (RCS), two extra wing hardpoints for payload, and other aerodynamic changes. In the end, the Super Hornet shared little with earlier F/A-18s aft of the forward fuselage. The Super Hornet has 42% fewer structural parts than the original Hornet design.[8] Flight characteristics include being highly departure resistant through its flight envelope, high angle-of-attack and care free flying qualities for combat and ease of training.[9]

While there is some similar cockpit items of the original Hornet, The Super Hornet features a touch-sensitive, up-front control display; a larger, liquid crystal multipurpose color display; and a new engine fuel display.[10] The digital flight-control system detects and corrects for battle damage.[9] Super Hornet production started with the APG-73 radar. The APG-79 AESA radar was introduced later (see the upgrade section below).

The ASQ-228 ATFLIR (Advanced Targeting FLIR), is the main electro-optical sensor and laser designator pod for the Super Hornet. Defensive systems include: AN/ALQ-214 Integrated Defensive Countermeasures system (IDECM), The IDECM system includes the ALE-47 countermeasures dispenser, the ALE-50 towed decoy and the AN/ALR-67(V)3 radar warning receiver and coordination of signal and frequency control emissions. Aircrew have the ability to use night vision goggles (NVG) for Super Hornet operations which means the aircraft interior and exterior lighting are NVG compatible.

The Super Hornet, unlike the previous Hornet, can be equipped with an aerial refueling system for the refueling of other aircraft,[11] filling the tactical airborne tanker role the Navy had lost with the retirement of the KA-6D tankers. The Hornet has a larger fuel payload capacity than the Tomcat, and is capable of flying the same high performance profiles as other strike aircraft. Critics such as Bob Kress, designer of the F-14 Tomcat, point out that the wing, however, is not as efficient as the subsonic KA-6, and that both Hornets and Super Hornets will be more dependent on inflight refueling than the longer range but retired Tomcat. 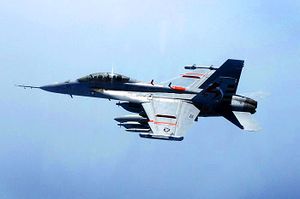 The EA-18G Growler is an electronic warfare version of the F/A-18F Super Hornet, slated to begin production in 2008, with fleet deployment in 2009. The EA-18G will replace the U.S. Navy's EA-6B Prowler.

The first unit to bring their F/A-18 Super Hornets to combat was VFA-115. On November 6, 2002, two F/A-18Es conducted a "Response Option" strike in support of Operation Southern Watch on two surface-to-air missile launchers at Al Kut and an air defense command and control bunker at Tallil air base. One of the pilots, Lieutenant John Turner dropped 2,000 lb JDAM bombs for the first time from the F/A-18E in wartime.

On September 8, 2006, VFA-211 F/A-18F Super Hornet expended GBU-12 and GBU-38 bombs against Taliban fighters and Taliban fortifications west and northwest of Kandahar. This was the first time the unit was in combat with the Super Hornet.[17]

In December 2006, several Australian media sources reported that the Australian Government may make an order for 24 F/A-18Fs for the RAAF, to replace its aging F-111s,[18] due to concerns over possible delays to the F-35 Joint Strike Fighter (JSF) program. The order was confirmed on March 6, 2007.[3] RAAF crews will begin training in the USA in 2009 with squadrons to become fully operational in 2010.

The initial package offered to the RAAF will include:[19]

The Indian Air Force has been offered the F/A-18E/F to replace their MiG-21s and MiG-23s. Boeing has also offered some technology transfer.[4]