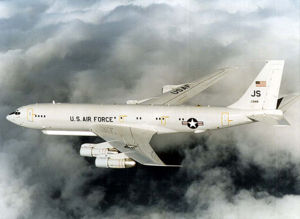 The E-8C Joint Surveillance Target Attack Radar System (Joint STARS) is a United States Air Force airborne battle management and command and control (C2) platform that conducts ground surveillance to develop an understanding of the enemy situation and to support attack operations and targeting that contributes to the delay, disruption and destruction of enemy forces. These functions support the primary mission of Joint STARS -- to provide dedicated support of ground and air theatre commanders.

The E-8C is a modified Boeing 707-300 series commercial airframe extensively remanufactured and modified with the radar, communications, operations and control subsystems required to perform its operational mission. The most prominent external feature is the 12 m (40 ft) long, canoe-shaped radome under the forward fuselage that houses the 7.3 m (24 ft) long, side-looking APY-7 phased array antenna.

The E-8C can respond quickly and effectively to support worldwide military contingency operations. It is a jam-resistant system capable of operating while experiencing heavy electronic countermeasures. The E-8C can fly a mission profile for 9 hours without refueling. Its range and on-station time can be substantially increased through in-flight refueling.

The AN/APY-3 radar uses the Doppler shift theory in order to pick up moving targets using its Ground Moving Target Indicator (GMTI) modes. This is distinct from pulsed radars as it looks for the frequency shift of the returned signal, so the radar can be used continuously. It has the ability to 'look' from a long range, which the military refers to as a high stand off capability. The antenna can be tilted to either side of the aircraft where it can develop a 120 degree field of view covering nearly 50,000 km² (19,305 mile²) and is capable of simultaneously tracking 600 targets at more than 250 km (152 miles). Any objects of sufficient size (vehicle) and density that are moving will be seen by the radar. The GMTI modes cannot pick up stationary objects. The system does have Synthetic Aperture Radar (SAR) modes that can produce images of stationary objects. Objects with many angles (for example, the interior of a pick-up bed) will give a much better radar signature (called specular returns). In addition to being able to detect, locate and track large numbers of ground vehicles, the radar has a limited capability to detect helicopters, rotating antennas and low, slow moving fixed wing aircraft. Radar operating modes include wide area surveillance, ground moving target indicator (GMTI), fixed target indicator (FTI) target classification and synthetic aperture radar.

The radar and computer subsystems on the E-8C can gather and display broad and detailed battlefield information. Data is collected as events occur. This includes position and tracking information on enemy and friendly ground forces. The information is relayed in near-real time to the US Army's common ground stations via the secure jam-resistant surveillance and control data link (SCDL) and to other ground command, control, communications, computers and intelligence (C4I) nodes beyond line-of-sight via ultra high frequency satellite communications. 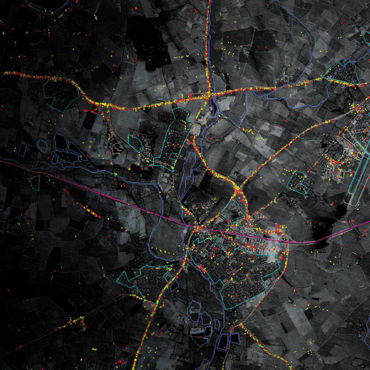 In support of air-to-ground operations, the E-8C can provide real time information needed to increase ground situation awareness with intelligence support, attack support and targeting operations including attack aviation, naval surface fire, field artillery and friendly maneuver forces. It also provides information for air and land commanders to gain and maintain control of the battle-space and execute against enemy forces.

As a battle management and command and control asset, the E-8C can support the full spectrum of roles and missions from peacekeeping operations to major theater war. As capable as the E-8's systems are, the information returned has very little detail. While it can pick up moving vehicles on the opposite side of the battlefield, it can provide little information about the vehicles. Approximate number of vehicles, location, speed, direction of travel, and the time that the target was detected is about all that can be determined. Identifying who the target is, what equipment they have, whether it is friendly, hostile, or bystanders, is not possible with this system. That is one of the reasons why it is a joint system, so that other sensors from the other services may reference each other to positively verify JSTARS reports. In the Army, JSTARS is analyzed in the Common Ground Station (CGS) and disseminated from there.

Joint STARS evolved from US Army and US Air Force programs to develop, detect, locate and attack enemy armor at ranges beyond the forward area of troops. In 1982, the programs were merged and the US Air Force became the lead agent. The concept and sensor technology for the E-8 was developed and tested on the Tacit Blue experimental aircraft. The prime contract was awarded to Northrop Grumman (formerly Grumman Aerospace Corporation) in September 1985 for two E-8C development systems. These aircraft deployed in 1991 to participate in Operation Desert Storm, even though they were still in development. The joint program accurately tracked mobile Iraqi forces, including tanks and Scud missiles. Crews flew developmental aircraft on 49 combat sorties accumulating more than 500 combat hours and a 100 % mission effectiveness rate.

On October 1, 2002, the 93d Air Control Wing (ACW) was "blended" with the 116th Bomb Wing (BW) in a ceremony at Robins AFB, Georgia. The 116 BW was an Air National Guard (ANG) wing equipped with the B-1B Lancer bomber at Robins AFB. As a result of a USAF reorganization of the B-1B force, all B-1Bs were assigned to active duty wings, resulting in the 116 BW lacking a current mission. Extensive efforts by the Governor and congressional delegation of Georgia led to the resulting "blending", with the newly created wing designated as the 116th Air Control Wing (ACW). The 93 ACW was deactivated the same day. The 116 ACW constituted the first fully blended wing of active duty and Air National Guard airmen. The wing's second and current Commander is Colonel Jim Jones, while the Deputy Commander is an ANG Deputy.

The 116 ACW has been heavily involved in both Operation Enduring Freedom (Afghanistan) and Operation Iraqi Freedom, earning high marks for operational effectiveness and recently completing 10,000 combat hours. The wing took delivery of the 17th and final E-8C on March 23, 2005.

The E-8C Joint STARS routinely supports various taskings of the Combined Force Command Korea during the North Korean winter exercise cycle and for the United Nations enforcing resolutions on Iraq. The twelfth production aircraft, outfitted with an upgraded operations and control subsystem, was delivered to the US Air Force November 5, 2001.

The RAF were impressed by the performance of the Joint STARS system in the Gulf War and subsequent joint operations and commenced studies to procure a similar system. The Raytheon Corporation was awarded the contract to provide a system comprising the ASARS-2 radar on the Bombardier Global Express jet, known as the Raytheon Sentinel. The ASARS-2 is an upgraded version of the Lockheed U-2's radar.

The E-8 was slated to be replaced (along with the EC-135 and the E-3 Sentry) by the E-10A Multisensor Command and Control Aircraft (MC2A), based upon the Boeing 767-400ER airframe and equipped with the Multi-Platform Radar Technology Insertion Program (MP-RTIP) 2-D AESA radar. The USAF has zeroed funding for the E-10 project in its FY2008 budget submittal due to overall USAF budget pressures but is maintaining funding for the MP-RTIP radar. The project is currently funded through FY2007 and it is unknown at this time if the Office of the Secretary of Defense (OSD) will reinstate funds in the FY2008 budget for the program.

The USAF has identified re-engining of the E-8C as an "unfunded priority." Newer but still used engines would reportedly result in lower maintenance costs, reduced fuel usage, and better performance for the aircraft.