The Airbus A310 is a medium to long-range widebody airliner manufactured by Airbus S.A.S. It was Airbus' second model to be introduced, and is a shortened derivative of the A300.

The A310 is a shortened derivative of the Airbus A300. Perhaps the greatest attribute of the A310 is range. The A310-300's range exceeds all A300 models and the -200 exceeds all A300 models in range except the A300-600. This quality has led to the aircraft being used extensively on transatlantic routes. The A300 and A310 introduced the concept of commonality which has become one of the Airbus family's greatest marketing points: A300-600 and A310 pilots can qualify for the other aircraft with only one day of training.

Like its sister aircraft, the A300, the A310 is reaching the end of its market life as a passenger and cargo aircraft. There have been no new A310 passenger orders since the late 1990s, and only a few freighter orders remain. The A310 (along with the A300) will cease production in July of 2007. Freighter sales are to be fulfilled by a new A330-200F derivative.[1]

The aircraft was formally launched in July 1978 for Lufthansa and Swissair. A further development of the A300, the aircraft was initially designated the A300 B10. Essentially a "baby" A300, the main differences in the two aircraft are

The A310 is marketed as an excellent introduction to widebody operations for developing airlines. With the Airbus A330 now a major success, further orders for the A310 are unlikely. Between 1983 and 1997, 255 A310s were delivered by Airbus. The A300 and A310 established Airbus as a major competitor to Boeing and allowed it to go ahead with the more ambitious A330/A340 family.

The A310 has also been extensively used with the armed forces of many countries, including but not limited to:

There is one variant of the A310 and launched in 1978 with introduction into service in 1983. There are several versions of the A310. 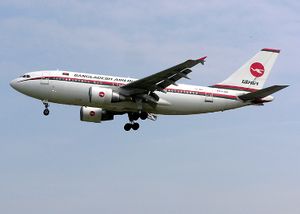 The first A310 was the 162nd Airbus off the production line, the aircraft made its maiden flight in April 1982 powered by Pratt & Whitney JT9D engines. The -200 entered service with Swissair and Lufthansa a year later.

First flown in July 1985, the -300 has an increased MTOW and an increase in range, provided by additional centre and horizontal stabilizer (trim-tank) fuel tanks. This model also introduced wingtip fences to improve aerodynamic efficiency, a feature that has since been retrofitted to some -200s. The aircraft entered service in 1986, again with Swissair. No production freighters of the A310 were produced. Operators such as FedEx instead adapt ex-airline A310s into freighters. Most have been the -300 version.

A310 MRTT:The A310 has long been operated by many of the world's airforces as a pure transport, however some are now being converted to the "Multi Role Tanker Transport" configuration by EADS, providing an aerial refueling capability. Six have been ordered; four by the German Luftwaffe and two by the Canadian Forces. Deliveries began in 2004. Three are being converted at EADS' Elbe Flugzeugwerke (EFW) in Dresden, Germany; the other three at Lufthansa Technik in Hamburg, Germany. 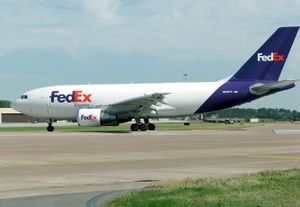 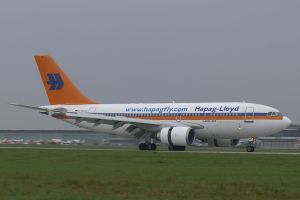 Wikinews has news related to:
Passenger plane crashes in Russia

Wikimedia Commons has media related to:
Airbus A310