The Boeing Business Jet series are factory conversions of Boeing airliners for the corporate jet market, historically the 737 series airliners. This aircraft usually seats between 25 and 50 passengers within a luxurious configuration. This may include a master bedroom, a washroom with shower(s), a conference/dining area, and a living area in the most common layout. The Boeing Business Jet is a 50/50 partnership between Boeing Commercial Airplanes and General Electric.

The Boeing BBJ is primarily a 737 commercial airframe with various modifications to provide for private jet service. The BBJ1 is based on a 737-700 airframe, with elements from the 737-800 included. The BBJ2 and BBJ3 are based on the 737-800 and 737-900 series, respectively. All models include certain non-specific changes to the airframe regardless of the BBJ series.

Changes from the normal 737 include:

Additionally, the BBJ1 contains the following items from the 737-800 (moot on the BBJ2 and BBJ3):

After the launch of the BBJ, Airbus followed suit with the launch of their Airbus ACJ derived from their A319 commercial airframe. More recently, they have also launched the longer range A318 Elite. Even with these competitors, the Boeing BBJ is currently the largest production business jet on the market. Other competitors on the smaller end of the market include the Embraer Lineage, the Bombardier Global Express and the Gulfstream G550. 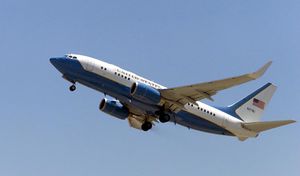 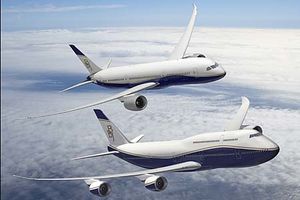