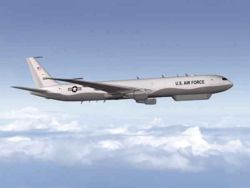 The Northrop Grumman E-10 MC2A was planned as a multi-role military aircraft to replace the Boeing 707 based E-3 Sentry, E-8 Joint STARS, and RC-135 Rivet Joint aircraft in US service. It was based on the 767-400ER commercial airplane.

In 2003, the Northrop Grumman, Boeing, and Raytheon MC2A Team was awarded a $215 million pre-SDD (System Development and Demonstration) contract for the development of the aircraft.

While the Northrop Grumman E-8 Joint STARS aircraft are a recent development, they will be the last such type to be based on the 707. To install the high technology systems envisaged for the MC2A on an increasingly obsolete airframe would not provide the capability required. The availability of powerful and reliable turbofans allowed a twinjet to be considered.

MC2A stands for Multi-Sensor Command and Control Aircraft. The MC2A was intended to be the ultimate theater-wide combat control center.

In August 2003 Air International reported that the goal of integrating air- and ground-search radars on a single airframe was abandoned. Electronic interference between the AESA and ground-surveillance radars as well as the power requirements for both systems were cited as the reason. Instead the USAF decided to plan two separate E-10 fleets to be integrated with the proposed Space-Based Radar system, air and space-based ELINT/SIGINT assets, and space-based IMINT satellites. It would have been the central command authority for all air, land, and sea forces in a combat theater. The E-10 was also considered for use as a command center for unmanned combat air vehicles.

The capability of the MC2A was to be raised incrementally, with each phase known as a "spiral."

In January 2006, the Air Force FY07 budget request revealed a reshaping of the E-10 program, with the cancellation of the E-10A SDD program, but maintained funding for the development and testing of a single demonstration aircraft, now known as the E-10A Technology Development Program (TDP).[1] The TDP would flight test the MP-RTIP Wide-Area Surveillance (WAS) radar, and conduct flight demonstrations of the E-10A's Cruise Missile Defense (CMD) Capability. The SDD elimination was designed to be a cost cutting measure and part of a larger reorganization and redefinition of the Air Force's mission including the retirement of the E-4B and F-117 fleets, as well as the elimination of all but 58 B-52s.

The E-10 finally disappeared at the end of FY2007 as budget pressures and competing priorities pushed it completely out of the budget. The USAF maintained funding for the MP-RTIP radar and may eventually put the radar on the E-8, or on a new aircraft, possibly the same airframe as the next aerial tanker.[2] The smaller version of the MP-RTIP AESA radar designed to be flown on the RQ-4B Global Hawk is being flight tested on the Scaled Composites Proteus aircraft. Boeing had kept the E-10 prototype (767-400ER) at Paine Field in Everett, Washington, until the prototype was sold to Bahrain in January 2009 for conversion into a VIP transport.[3]