The Boeing 2707 was developed as the first American supersonic transport (SST). After winning a competition for a government-funded contract to build an American SST, Boeing began development at its facilities in Seattle, Washington. Rising costs, the lack of a clear market, and increasing outcry over the environmental effects of the aircraft—notably sonic boom—led to its cancellation in 1971 before two prototypes had been completed.

Boeing had worked on a number of small-scale SST studies since 1952. In 1958, it established a permanent research committee, which grew to a $1 million effort by 1960. The committee proposed a variety of alternative designs, all under the name Model 733. Most of the designs featured a large delta wing, but in 1959 another design was offered as an offshoot of Boeing's efforts in the swing-wing TFX project (which led to the purchase of the General Dynamics F-111 instead of the Boeing offering). In 1960, an internal "competition" was run on a baseline 150-seat aircraft for trans-Atlantic routes, and the swing-wing version won.[1]

By mid-1962, it was becoming clear that tentative talks earlier that year between the Bristol Aeroplane Company and Sud Aviation on a merger of their SST projects were more serious than originally thought. It appeared there was a very real chance the combined companies would be offering a design. In November, the two companies announced that a design called "Concorde" would be built by a consortium effort. This set off something of a wave of panic in other countries, as it was widely believed that almost all future commercial aircraft would be supersonic, and it looked like the Europeans would start off with a huge lead.

On June 5, 1963, President John F. Kennedy formed the National Supersonic Transport program, which committed the government to subsidizing 75% of the development costs of a commercial airliner to compete with Concorde. The director of the Federal Aviation Administration, Najeeb Halaby, decided the Concorde was too far ahead in development to bother building a direct competitor, and instead selected a much more advanced standard as their baseline. The American SST was intended to carry 250 passengers (more than twice as many as Concorde), fly at Mach 2.7–3.0, and have a trans-Atlantic range of 4,000 miles. The high speed demanded that the aircraft be made out of either stainless steel or titanium, because skin friction at speeds above Mach 2.2 would cause duralumin (aircraft aluminium) to go "plastic"; the materials involved significantly inflated the price. Requests for Proposals were sent out to airframe manufacturers Boeing, Lockheed, and North American for the airframes; and Curtiss-Wright, General Electric and Pratt & Whitney for engines. The FAA estimated that there would be a market for 500 SSTs by 1990. 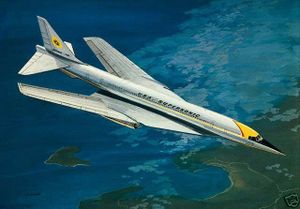 Preliminary designs were submitted to the FAA on January 15, 1964. Boeing's entry was essentially identical to the swing-wing Model 733 studied in 1960; it was known officially as the Model 733-197, but also referred to both as the 1966 Model and the Model 2707. The latter name became the best known in public, while Boeing continued to use 733 model numbers. The design had an uncanny resemblance to the future B-1 Lancer bomber, with the exception that the engines were mounted in individual nacelles instead of the box-like system on the Lancer.

A "downselect" of the proposed models resulted in the North American NAC-60 and Curtiss-Wright efforts being dropped from the program, with both Boeing and Lockheed asked to offer SST models meeting the more demanding FAA requirements and able to use either of the remaining engine designs. In November, another design review was held, and by this time Boeing had scaled up the original design into a 250-seat model, the Model 733-290. Due to concerns about jet blast, the four engines were moved to a position underneath an enlarged tailplane. When the wings were in their swept-back position, they merged with the tailplane to give a delta-wing platform.

Both companies were now asked for considerably more detailed proposals, to be presented for final selection in 1966. When this occurred, Boeing's design was now the 300-seat Model 733-390. Both the Boeing and Lockheed L-2000 designs were presented in September 1966 along with full-scale mock-ups. A lengthy review followed, and on December 31, 1966, Boeing was announced as the winner. The design would be powered by the General Electric GE4/J5 engines. Lockheed's L-2000 was judged simpler to produce and less risky, but its performance was slightly lower and its noise levels slightly higher. 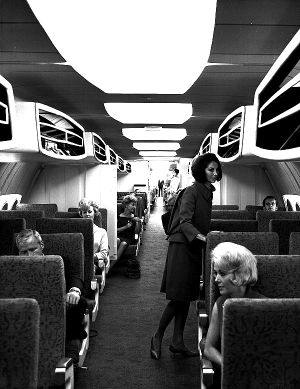 A Boeing Co. mock-up of a single aisle narrow body Pan Am B2707 cabin

The -390 would be an advanced aircraft even if it were only subsonic. It was one of the earliest wide-body designs, using a 2-3-2 row seating arrangement in a fuselage that was considerably wider than aircraft then in service. The SST mock-up included both overhead storage for smaller items with restraining nets, as well as large drop-in bins between sections of the aircraft. In the main 247-seat tourist-class cabin, the entertainment system consisted of retractable televisions placed between every sixth row in the overhead storage. In the 30-seat first-class area, every pair of seats included smaller televisions in a console between the seats. Windows were only 6" due to the high altitudes the aircraft flew at maximizing the pressure on them, but the internal pane was 12" to give an illusion of size.

Boeing predicted that if the go-ahead were given, construction of the SST prototypes would begin in early 1967 and the first flight could be made in early 1970. Production aircraft could start being built in early 1969, with the flight testing in late 1972 and certification by mid-1974. 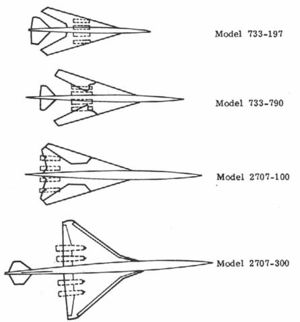 Boeing SST evolution. Note that the model numbers are somewhat different from in the article.

A major change in the design came when Boeing added canards behind the nose—which added weight. Boeing also faced insurmountable weight problems due to the swing-wing mechanism. In October 1968, the company was finally forced to abandon the variable geometry wing. The Boeing team fell back on a tailed delta wing—somewhat in irony given that the rejected Lockheed design had a fixed wing. The new design was also smaller, seating 234, and known as the Model 2707-300. Work began on a full-sized mockup and two prototypes in September 1969, now two years behind schedule.

A promotional film claimed that airlines would soon pay back the federal investment in the project, and it was projected that SSTs would dominate the skies with subsonic jumbo jets (such as Boeing's own 747) being only a passing intermediate fad.

By this point, the opposition to the project was becoming increasingly vocal. Environmentalists were the most influential group, voicing concerns about possible depletion of the ozone layer due to the high altitude flights[citation needed], and about noise at airports and from sonic booms. The latter became the most significant rallying point, and supersonic flight over land in the United States was eventually banned.

The project suffered political opposition from the left, which disliked the government subsidizing the development of a commercial aircraft to be used by private enterprise. The anti-SST campaign was led by Democratic Senator William Proxmire (D-Wisconsin), who saw the campaign as a crusade against unnecessary spending by the federal government.

In March 1971, despite the project's strong support by the administration of President Richard M. Nixon, the U.S. Senate rejected further funding. Afterward, letters of support from aviation buffs, containing nearly $1 million worth of contributions, poured in. But the SST project was cancelled May 20, 1971. At the time, there were 115 unfilled orders by 25 airlines; at the same time, the Concorde had 74 orders from 16 customers[2]. The two prototypes were never completed. The SST became known as "the airplane that almost ate Seattle." Boeing was a major economic force in the region, and was stretched so thin that a billboard was erected that read, "Will the last person leaving Seattle - turn out the lights?"[3].

The SST mockup was disassembled and shipped to Florida, where it sat in a scrapyard for 19 years before it was purchased and partially reassembled for display at the Hiller Aviation Museum in San Carlos, California.

North American Rockwell's B-1[4] would successfully use essentially the same layout as the model 733. The B-1B is the only swing-wing aircraft still in service with US forces. The Soviet Tupolev Tu-160 Blackjack also resembles the 733 in configuration, and is not only in service, but still in production even as variable geometry wings have fallen out of favor since the late 1970s.

The Museum of Flight in Seattle parks its Concorde across from the building where the original mockup was housed in Seattle[5]. While the TU-144 had a short service life [6], the Concorde was successful enough to fly as a small luxury fleet from 1976 into the 21st century. As the most advanced supersonic transports became some of the oldest airframes in the fleet, they also fell to the economics of new efficient subsonic jets and upgrade costs. [7].

Though many designs have been studied since, it is unlikely similar aircraft will economically feasible in the forseeable future. The Concorde's model of cooperation paved the way for Airbus, Boeing's most formidable competitor[8]. Seattle's economy is now more diverse, and 2007 made Boeing a leader in sales again. Formed in 1968, Seattle's basketball team is still called the Seattle SuperSonics or just "Sonics", which was inspired by the newly won SST contract.[9] Boeing's Future of Flight museum has the story and models of all of its production jetliners and the Concorde, but not the SST project.

The Boeing SST is unusual in that it was a very popular subject for toys and models well before it (never) flew. The most popular example was a 2-ship kit with models in cruise and landing configuration in the original canary yellow paint scheme, also re-issued in Pan Am colors (which was re-issued in the mid 2000s). Lindbergh also made a small swing-wing model Monogram also produced the canard configuration. There was a very small fixed wing model by Entex, and a small die-cast model, most of which show up on online auctions from time to time. A resurgence in interest by the 2000s also led to production of new wooden models which were offered online. There is a substantial market for Boeing (and Lockheed) SST items, some kept by employees at the time.