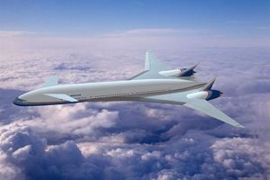 The Boeing Sonic Cruiser was a subsonic concept aircraft proposed by Boeing Commercial Airplanes in 2001. Its distinguishing feature was to be its high-subsonic cruising speed, faster than conventional jet airliners.

The Sonic Cruiser was born from one of numerous outline projects in a Boeing R&D program known internally as "20XX" (hinting that, had it entered production, it might have spawned a new "20 series" of Boeing aircraft), the goal of which was to look at potential designs for a possible new near-sonic or supersonic airliner. 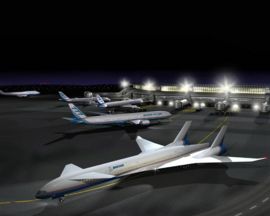 The strongest of these initial concepts was dubbed "Sonic Cruiser" and publicly unveiled on March 29, 2001, shortly after the launch of the A380 by rival Airbus. Boeing had recently withdrawn its proposed 747-X derivative from competition with the Airbus A380 when not enough airline interest was forthcoming, and instead proposed the Sonic Cruiser as a completely different approach.

Instead of the A380's massive capacity, requiring a hub and spoke model of operation, the Sonic Cruiser was designed for rapid point-to-point connections for only 250 passengers. With delta wings and flying just short of the speed of sound at 0.95 Mach (about 1010 km/h or 627 mph at altitude), the Sonic Cruiser promised 20% faster speed than conventional aircraft without the noise pollution caused by supersonic Concorde's sonic boom. The aircraft would have flown at altitudes in excess of 40,000 feet, and would have possessed a range somewhere between 6,000 and 10,000 nautical miles.

The Sonic Cruiser concept originated in 1999 and a variety of concepts were studied, including supersonic aircraft, aircraft with the engines mounted above the wing, aircraft with a single vertical tail, and aircraft with rectangular intakes. The initial sketches released to the public were highly conjectural. A patent drawing filed by Boeing on March 22, 2001 put the baseline aircraft's dimensions at 250 feet in length, with a wingspan of 164.9 feet. 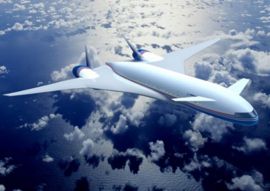 Wind tunnel testing and computational fluid dynamics analysis further refined the Sonic Cruiser concept. Based on artwork released by Boeing in July 2002, the Sonic Cruiser now sported two taller vertical tails with no inward cant. The forward canard was set at zero degrees dihedral. At this point, Boeing had yet to decide on the size or layout of the aircraft's fuselage cross section.

In the end, most airlines favored lower operating costs over a marginal increase in speed, and the project did not attract the interest Boeing had been hoping for. In fall 2002, Boeing released artwork of a notional "7E7" concept aircraft, which would become the 787/Y2. The Sonic Cruiser project was finally abandoned by December 2002, in favor of the slower but fuel-efficient 787 Dreamliner. However, much of the research from the Sonic Cruiser was applied to the 787, including carbon fiber reinforced plastic for the fuselage and wings, and bleedless engines. Not a single order was made for the Sonic Cruiser.