Air Force One is the air traffic control call sign of any United States Air Force aircraft carrying the President of the United States.[1] Since 1990, the presidential fleet has consisted of two specifically configured, highly customized Boeing 747-200B series aircraft - tail codes 28000 and 29000 - with Air Force designation VC-25A. While these aircraft are referred to as 'Air Force One' only while the president is on board, the term is commonly used to describe either of the two aircraft normally used and maintained by the U.S. Air Force solely for the president.

When the president needs to fly to locations that have runways too short for the VC-25A, a Boeing C-32 is used instead; the Lockheed C-140 Jetstar was also used in this role, notably by Ronald Reagan.[citation needed]

An Air Force aircraft carrying the Vice President of the United States is designated as Air Force Two.

Theodore Roosevelt became the first president to fly in an aircraft on 11 October 1910. At the time he was no longer in office, having been succeeded by William Howard Taft. However, prior to World War II, overseas and cross-country presidential travel was rare. Lack of wireless telecommunication and quick transportation made long-distance travel impractical, as it took up much time and isolated the president from events in Washington, D.C.

By the 1940s and 1950s, air travel had become safer and more convenient. The first president to fly in an aircraft while in office was Franklin D. Roosevelt, who traveled on a Boeing 314 flying boat to the 1943 Casablanca Conference on the progress of World War II. The threat from the Kriegsmarine's U-boats in the Battle of the Atlantic made air travel the preferred method of transportation. 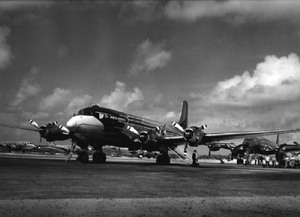 The first aircraft officially designated for presidential flight was the C-87A Liberator Express, a reconfigured B-24 bomber. This aircraft was called Guess Where Two. However, after a different C-87A crashed, Guess Where Two was no longer used for Roosevelt; the Secret Service reconfigured a C-54 Skymaster as a replacement. This aircraft was nicknamed the Sacred Cow and included a sleeping area, radio telephone, and retractable elevator for Roosevelt's wheelchair. It carried the president to several important events, most notably the Yalta Conference. The Secret Service put the C-87A aircraft to use by having First Lady Eleanor Roosevelt use it instead.

After Roosevelt died in spring 1945, Vice President Harry S Truman became the President. He replaced the C-54 with a modified C-118 Liftmaster, calling it the Independence, possibly in reference to President Truman's hometown of Independence, Missouri. This was the first aircraft acting as Air Force One that had a distinctive exterior–a bald eagle head painted on its nose.

The presidential call sign was established for security purposes during the administration of Dwight D. Eisenhower. The change stemmed from a 1953 incident where an Eastern Airlines commercial flight (8610) had the same call sign as a flight the president was on (Air Force 8610). The aircraft accidentally entered the same airspace, and after the incident the unique call sign "Air Force One" was introduced for the presidential aircraft.

Eisenhower also introduced four other propeller aircraft, the Lockheed C-121 Constellations (VC-121E) to presidential service. These aircraft were named Columbine II and Columbine III by Mamie Eisenhower after the columbine, the official state flower of Colorado, her adopted home state. Two Aero Commanders were also added to the fleet and earned the distinction of being the smallest Air Force Ones ever. President Eisenhower also upgraded Air Force One's technology by adding an air-to-ground telephone and an air-to-ground teletype machine. Towards the end of Eisenhower's term, in 1958, the Air Force added three Boeing 707 jets (designated SAM 970, 971, and 972), 707-153 models, into the fleet. "Ike" became the first president to use the 707 during his "Flight to Peace" Goodwill tour, from 3 December through 22 December 1959. He visited 11 Asian nations, flying Template:Convert in 19 days, about twice as fast as he would have on Columbine.

Air Force One usually does not have fighter aircraft to escort the presidential aircraft over the United States, but it does occur. On an unscheduled stop in San Antonio, Texas, in January 2006, four fighters were seen in close coverage, within a few meters, two below Air Force One's fuselage, and one under each wing. In June 1974, Syrian fighter jets intercepted Air Force One to act as escorts. However, the Air Force One crew was not informed in advance and, as a result, took evasive action including a dive.[2]

Boeing 707s as Air Force One

Presidential air travel entered the jet age during the presidency of John F. Kennedy. In October 1962, the Kennedy administration took delivery of a modified long-range 707—Special Air Mission (SAM) 26000, although he had used the Eisenhower-era jets for trips to Canada, France, Austria and the United Kingdom.

The Air Force had attempted a special presidential livery of their own design: a scheme in red and metallic gold, with the nation's name in block letters. Kennedy felt the aircraft appeared too regal and on advice from his wife, First Lady Jacqueline Kennedy, he contacted the French-born American industrial designer Raymond Loewy for help in designing a new livery and interiors for the 707 jet.[3] Loewy met with the president, and recorded that his earliest research on the project took him to the National Archives where he looked at the first printed copy of the United States Declaration of Independence, and saw the country's name set widely spaced and in upper case in a typeface called Caslon. He chose to expose the polished aluminum fuselage on the bottom side, and used two blues; a slate-blue associated with the early republic and the presidency, and a more contemporary cyan to represent the present and future. The presidential seal was added to both sides of the fuselage near the nose, a large American flag was painted on the tail, and the sides of the aircraft read UNITED STATES OF AMERICA. The result of Loewy's work won immediate praise from the president, the press, and the jet's livery became a global icon. The 707 markings were adapted for the larger 747 Air Force One in 1989.

SAM 26000 was in service from 1962 to 1998, serving Presidents Kennedy to Clinton, but was replaced by another Boeing 707, Special Air Mission 27000 in 1972. Richard Nixon was the first president to use this, and the aircraft would continue serving every president since, until it too was replaced by two 747 jumbo jets (SAM 28000 and 29000) in 1990. SAM 27000 was decommissioned in 2001 by President George W. Bush, flown to San Bernardino International Airport in California, and later driven in pieces to the Ronald Reagan Presidential Library in Simi Valley where it was reassembled and is currently on permanent display.

Though Ronald Reagan's two terms as president saw no major changes to Air Force One, the fabrication of the current 747s began during his presidency. The first aircraft was delivered in 1990, during the administration of George H.W. Bush. Delays were experienced to allow for additional work to protect the aircraft from electromagnetic pulse (EMP) effects.

One of the most dramatic episodes aboard Air Force One happened during the 9/11 attacks. President George W. Bush was interrupted at Emma E. Booker Elementary School in Sarasota, Florida, after the attack on the World Trade Center South Tower in New York City. President Bush flew on Air Force One from Sarasota-Bradenton International Airport to Barksdale Air Force Base in Louisiana and then to Offutt Air Force Base in Nebraska before returning to Washington. The next day, officials at the White House and the Justice Department explained that President Bush did this because there was "specific and credible information that the White House and Air Force One were also intended targets."[4] The White House later could not confirm evidence of a threat made against Air Force One, and subsequent investigation found the original claim to be a result of miscommunication.[5]

Past aircraft that served as Air Force One

United Airlines has the distinction of being the only commercial airline to have operated Executive One, the designation given to a civilian flight on which the U.S. President is aboard. On 26 December 1973, then-President Richard Nixon flew as a passenger aboard a Washington Dulles to Los Angeles flight. It was explained by his staff that this was done in order to conserve fuel by not having to fly the usual Boeing 707 Air Force aircraft.[6]

On 8 March 2000, President Clinton flew to Pakistan aboard an unmarked Gulfstream III while another aircraft with the call sign "Air Force One" flew on the same route a few minutes later. This diversion was reported by several U.S. press outlets and is not a secret event. This was presumably done as a diversion in case terrorists attempted to shoot down the aircraft that the president was aboard.

The Boeing 707 that served as Air Force One from the Nixon years to the current George Bush administration (SAM 27000) is on display in Simi Valley, California at the Ronald Reagan Presidential Library. The Library's Air Force One Pavilion was opened to the public on 24 October 2005.

A VC-118A Liftmaster used by John F. Kennedy is on display at the Pima Air & Space Museum in Tucson, Arizona.

In 2007 U.S. Air Force requested information from Airbus on the A380 as replacement for Air Force One and the C-5 Galaxy based on maintenance costs and fuel efficiency concerns.[7][8]

The 747 Air Force One's interior was designed by Don and Janice Zerbe.

Analogs in other countries

Main article: Air transports of heads of state and government

Air Force One is a prominent symbol of the American presidency and its power.[3] With the White House and presidential seal, it is one of the most familiar presidential symbols. It is also famous worldwide, so much so that when then-British Prime Minister Tony Blair indicated a desire for a similar personal air transport, the press immediately dubbed it "Blair Force One."[9][10][11]

Air Force One has often appeared in popular culture and fiction, most notably as the setting of the 1997 action film Air Force One. In the film, Kazakh terrorists hijack Air Force One and hold the president and other passengers as hostages. The film was noted for its fancifully-exaggerated depiction of the aircraft's capabilities.

In Superman: The Movie, Air Force One (a Boeing 707) is struck by lightning flying over Metropolis, prompting Superman to bring it safely to the ground.

Air Force One has been featured in Robert Serling's novel The President's Plane Is Missing, subsequently adapted for a TV movie and its sequel Air Force One Is Haunted. The latter describes supernatural visits to the incumbent President by the ghost of Franklin D. Roosevelt.

In a 1991 episode of the sitcom Wings, Air Force One, carrying President George H.W. Bush and First Lady Barbara Bush, lands at the Nantucket Airport on the way to Kennebunkport, Maine. The Bushes remain aboard the plane while their dog, Millie, is brought to the vacation home of her doctor. Wings character Roy Biggins, who had hoped for a chance to have a picture taken of himself shaking hands with President Bush, tried to force his way onboard the plane when told that the president would not enter the terminal and was quickly arrested.

Air Force One is the setting of the climax for Anthony Horowitz's Alex Rider novel Eagle Strike.

Photographs and other multimedia

Wikimedia Commons has media related to:
Air Force One