The Douglas SBD Dauntless was the U.S. Navy's main dive bomber from mid-1940 until late 1943, when it was supplemented (although not entirely replaced) by the SB2C Helldiver.

The Northrop BT-1 provided the basis for the SBD, which began manufacture in 1940. It was designed with a 1,000 horsepower Wright Cyclone powerplant. A year earlier, both the U.S. Navy and Marine Corps had placed orders for the new dive bombers, aptly designated the SBD-1 and SBD-2 (the latter had increased fuel capacity and different armament). The former went to the Marine Corps in late 1940, and the latter went to the Navy in early 1941.

The next version, titled the SBD-3, began manufacture in early 1941. It provided increased protection, self-sealing fuel tanks, and four machine guns. The SBD-4 provided a 12-volt (from 6) electrical system, and a few were converted onto SBD-4P reconnaissance platforms.

The next (and most produced) variant, the SBD-5, was primarily produced at the Douglas plant at Tulsa, Oklahoma. It was equipped with a 1,200 hp (895 kW) engine and increased ammunition. Over 2,400 were built, and a few were shipped to the Royal Navy for evaluation. In addition to American service, the type saw combat against the Japanese with No. 25 Squadron of the Royal New Zealand Air Force which soon replaced them with F4U Corsairs, and against the Germans with the Free French Air Force. A few were also sent to Mexico. The final version, the SBD-6, provided more improvements but production ended in the summer of 1944. 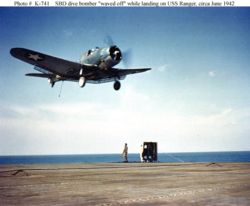 SBD Dauntless goes around for another landing attempt, after being "waved off" by the Landing Signal Officer on USS Ranger CV-4, circa June 1942.

The U.S. Army had its own version of the SBD, known as the A-24 Banshee, which was essentially the same aircraft with a few changes (the removal of the unnecessary arresting hook and different tires). Two versions (the A-24A and A-24B) were produced and used by the Army during and after the war.

The SBD was involved in combat from the first day of the Pacific War, as Dauntlesses arriving at Hawaii from USS Enterprise were caught in the Pearl Harbor attack. The type's first major use was in the Battle of the Coral Sea, when SBDs and TBDs sank the Japanese aircraft carrier Shōhō. SBDs were also used as anti-torpedo combat air patrol and scored several times against Japanese aircraft trying to attack USS Lexington and USS Yorktown. One pilot, "Swede" Vejtasa, was attacked by 8 A6M Zero fighters and managed to hold them off and down 3 in the process [1]. His skill as a fighter pilot were clear and he was immediately transferred to fighters. In October 1942 he downed 7 enemy planes in one day. However, the SBD's most important contribution to the American war effort probably came during the Battle of Midway (early June 1942), when SBD dive bomber attacks sank all four of the Japanese aircraft carriers (the Akagi, Kaga, Sōryū, and Hiryū) as well as heavily damaging two Japanese cruisers (including the Mikuma, which sank before a Japanese destroyer could scuttle it.) 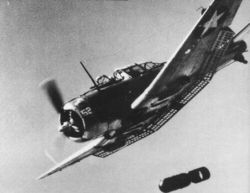 SBD-3 Dauntless in a dive, releasing the bomb.

At Midway, Marine SBDs were not as effective. One squadron, operating off Midway Island, was not trained in the "Helldiving" technique; instead, the new pilots resorted to the slower but easier glide bombing technique, which led to heavy losses. The carrier-borne squadrons, on the other hand, were much more effective, combined with their F4F Wildcat fighter escorts. It should also be mentioned that the success of dive bombing was due to two important circumstances: First and foremost, the fact that the Japanese carriers were at their most vulnerable: Readying bombers for battle, with full fuel hoses and armed ordnance strewn across their hangar decks. Secondly, that the valiant but doomed assault of the TBD Devastator squadrons from the American carriers had drawn the Japanese fighter cover down and away from the approach vector of the dive bombers, making it impossible for them to intercept the Dauntlesses thereby allowing the SBD attacks to go unhindered.

Next, SBDs participated in the Guadalcanal campaign, both from American carriers and Henderson Field on Guadalcanal Island. Dauntlesses contributed to the heavy loss of Japanese shipping during the campaign, including the carrier Ryūjō near the Solomon Islands on August 24, damaging three others during the six-month campaign. SBDs proceeded to sink one cruiser and nine transports during the decisive Naval Battle of Guadalcanal.

During the decisive time of the Pacific Campaign, the SBD's strengths and weaknesses became evident. Interestingly, while the American strength was dive bombing, the Japanese stressed their Nakajima B5N "Kate" torpedo bombers, which caused the bulk of the damage at Pearl Harbor.

Although it was already reaching obsolescence by 1941, the SBD was used until 1944 when the Dauntless undertook its last major action during the Battle of the Philippine Sea. However, some Marine squadrons utilized Dauntlesses until the end of the war. It had already been replaced by the SB2C Helldiver in the U.S. Navy, much to the dismay of the pilots, many of whom believed that the "Slow But Deadly" Dauntless was a better aircraft than the Helldiver, which gained the nickname "Son of a Bitch 2nd Class." The Dauntless was one of the most important aircraft in the Pacific Theatre of World War II, sinking more enemy shipping in the Pacific war than any other US or Allied aircraft. 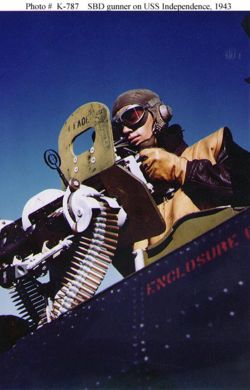