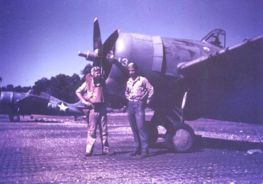 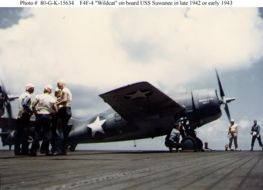 The Grumman F4F Wildcat was the primary carrier-based fighter of the United States Navy for the first year and a half of World War II. An improved version built by General Motors (the General Motors FM Wildcat) remained in service throughout the war, on escort carriers where newer, larger and heavier fighters could not be used.

The F4F-1 began as a biplane design entered in a US Navy competition, whose clear inferiority to the monoplane Brewster F2A-1 caused its complete remodeling into the single-wing XF4F-2.[citation needed] When the Brewster fighter was chosen for production, Grumman's prototype was rebuilt as the XF4F-3 with new wings and tail and a supercharged version of the Pratt & Whitney R-1830 "Twin Wasp" radial engine.[citation needed] Testing of the XF4F-3 led to an order for F4F-3 production models, the first of which was completed in February 1940. France also ordered the type, powered by Wright R-1820 "Cyclone 9" radial engines, but France fell before they could be delivered and they ultimately went to the British Royal Navy, which called them "Martlet I"s. Both the British planes and the US Navy's F4F-3 joined active units in 1940 with an armament of four .50 caliber Browning machine guns and a good ammunition supply.[citation needed]

All versions of the Wildcat used fuselage mounted, hand-cranked landing gear with a relatively narrow track, making landing accidents, where the landing gear were not fully locked into place, distressingly common.[citation needed] This unusual main landing gear design was originally designed by Grover Loening, for his firm's aircraft in the 1920s, and as Leroy Grumman had worked for Loening before starting up his own company, it was readily licensed to Grumman and was used earlier on all of Grumman's fighter biplanes (from the FF-1 through the F3F) of the 1930s and on the J2F Duck amphibious biplane. [1]

The Wildcat was outperformed by the Mitsubishi Zero, its major opponent in the early part of the Pacific Theater, but held its own by absorbing far more damage. [2] With relatively heavy armor and self-sealing fuel tanks, the Grumman airframe could survive far more than its lightweight, unarmored Japanese rival. Many US Navy fighter pilots also were saved by the F4F's ZB homing device, which allowed them to find their carriers in poor visibility, provided they could get within the 30-mile range of the homing beacon. [3]

Four US Marine Corps Wildcats played a prominent role in the defence of Wake Island in December 1941. USN and USMC aircraft were the fleet's primary air defence during the Battles of Coral Sea and Midway and, land-based Wildcats played a major role during the Guadalcanal Campaign of 1942-43.[citation needed] It was not until 1943 that more advanced naval fighters, the F6F Hellcat and F4U Corsair, capable of taking on the Zero on more even terms reached the South Pacific theatre.[citation needed]

In the European theater, the Wildcat scored its first combat victory on Christmas Day 1940, when a land-based British Fleet Air Arm Martlet (as the type was originally known in British service) destroyed a Junkers Ju 88 bomber over the Scapa Flow naval base.[citation needed] This was the first combat victory by a US-built fighter in British service in World War II.[citation needed] The type also pioneered combat operations from the smaller escort carriers.[citation needed] Six went to sea aboard the converted ex-German merchant vessel HMS Audacity in mid-1941 and shot down several Luftwaffe Fw 200 Condor bombers during highly effective convoy escort operations.[citation needed] These were the first of many Wildcats to see shipboard combat. The Fleet Air Arm was later to abandon the practice of using its own unique names for US-provided aircraft in British naval service, and began to use the US Navy's aircraft names instead.[citation needed]

The original Grumman F4F-1 design was a biplane, which proved inferior to rival designs, necessitating a complete redesign as a monoplane named the F4F-2. This design was still not competitive with the Brewster F2A Buffalo which won initial US Navy orders, but when the F4F-3 development was fitted with a more powerful engine, the Pratt & Whitney Twin Wasp, it showed its true potential.[citation needed]

US Navy orders followed as did some (with Wright Cyclone engines) from France; these ended up with the Royal Navy's Fleet Air Arm after the fall of France and entered service on the 8 September 1940. In British service initially these were known as the Martlet I, but not all Martlets would be to the exact same specifications as US Navy aircraft. The four .50-caliber (12.7mm) M2 Browning machine guns of the F4F-3 carried 450 rounds per gun. Poor design of the installation caused these otherwise reliable machine guns to frequently jam, a problem common to wing-mounted weapons of many US fighters early in the war. [7] It was an F4F-3 flown by Lt. Edward O'Hare that in a few minutes shot down five Mitsubishi twin-engine bombers attacking USS Lexington off Bougainville on 20 February, 1942. But contrasting with O'Hare's performance, his wingman was unable to participate because his guns would not function.[8]

A shortage of two-stage superchargers lead to the development of the F4F-3A, which was basically the F4F-3 but with a 1,200 hp Pratt & Whitney R-1830-90 radial engine with a more primitive single-stage two-speed supercharger. The F4F-3A, which was capable of 312 mph at 16,000 ft, was used side by side with the F4F-3, but its poorer performance made it unpopular with US Navy fighter pilots. The F4F-3A would enter service as the Martlet III(B), the FM-1 as the Martlet V, and the FM-2 as the Wildcat VI (By then the Martlet name was dropped and the planes were reverted to using the name Wildcat). The name Wildcat was still commonly used for these aircraft in spite of the official name change.[citation needed]

A new version, the F4F-4, entered service in 1942 with six guns and folding wings, allowing more to be crammed on a carrier; this was the definitive version and the one that saw the most combat service in the early war years, including the Battle of Midway. This version was less popular with American pilots, because the same amount of ammunition was spread over two additional guns, decreasing firing time.[9] With the F4F-3's four 50-caliber guns and 450 rounds per gun, pilots had 34 seconds of firing time; six guns decreased ammunition to 240 rounds per gun, which could be expended in less than 20 seconds. The increase to six guns was attributed to the Royal Navy, who wanted greater firepower to deal with German and Italian foes. Jimmy Thach is quoted as saying, "A pilot who cannot hit with four guns will miss with eight." [10] Extra guns and folding wings meant extra weight, and reduced performance: the F4F-4 was capable of only about 318 mph at 19,400 ft. Rate of climb was noticeably worse in the F4F-4, while Grumman optimistically claimed the F4F-4 could climb at a modest 1,950 feet per minute, in combat conditions, pilots found their F4F-4s capable of ascending at only 500 to 1,000 feet per minute.[11] Moreover, the F4F-4's folding wing was intended to allow five F4F-4s to be stowed in the space required by two F4F-3s. In practice, the folding wings allowed an increase of about 50% in the number of Wildcats carried aboard US fleet aircraft carriers.

The F4F-7 was a photographic reconnaissance variant, with armor and armament removed. It had non-folding "wet" wings that carried an additional 555 gallons of fuel for a total of about 700 gallons, increasing its range to 3,700 miles. 21 built.[citation needed]

Grumman's Wildcat production ceased in early 1943 to make way for the newer F6F Hellcat, but General Motors continued producing Wildcats for both US Navy and Fleet Air Arm use. From 1943 onward, Wildcats were primarily assigned to escort carriers ("jeep carriers") as larger fighters such as the Hellcat and the Vought F4U Corsair were needed aboard fleet carriers, and the Wildcat's slower landing speed made it more suitable for shorter flight decks.[citation needed] At first, GM produced the FM-1 (identical to the F4F4, but with four guns). Production later switched to the improved FM-2 (based on Grumman's XF4F-8 prototype) optimized for small-carrier operations, with a more powerful engine, and a taller tail to cope with the torque.[12] In all, 7,860 Wildcats were built.[13] 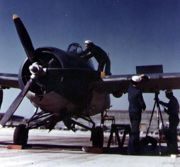 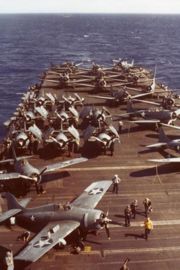 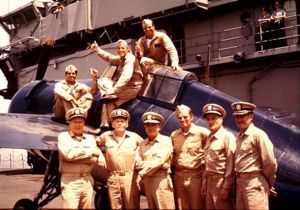