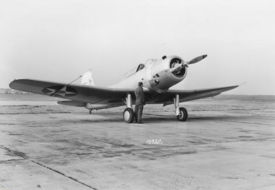 US Navy Vought SB2U Vindicator tested by the NACA.

The Vought SB2U Vindicator (known as the Chesapeake in Royal Navy service) was a carrier-based dive bomber developed for the US Navy in the 1930s, the first monoplane in this role. Obsolescent at the outbreak of World War II, Vindicators still remained in service at the time of the Battle of Midway, but by 1943 all had been withdrawn to training units.

In 1934, the US Navy issued a requirement for a new Scout Bomber for carrier use, and received proposals from six manufacturers. The specification was issued in two parts, one for a monoplane, and one for a biplane. Vought submitted designs in both categories, which would become the XSB2U-1 and XSB3U-1 respectively.

The SB2U was evaluated alongside the Brewster XSBA-1, Curtiss XSBC-3, Great Lakes XB2G-1, Grumman XSBF-1, and Northrop XBT-1. All but the Great Lakes and Grumman submissions were ordered into production. Around 170 of all variants were produced, and a single example is preserved at the National Museum of Naval Aviation at NAS Pensacola.

Based on the SB2U-2, the V-156-F incorporated specific French equipment. Briefly after the deliveries started in July 1939, one example was trialed aboard Béarn, but when the war broke out the old carrier was declared too slow for operational service. As a result V-156-F-equipped units, escadrilles AB 1 and AB 3, were based ashore when the Battle of France started. AB 1 sustained heavy losses while attacking bridges and German ground targets in Northern France, while AB 3's V-156-Fs were briefly engaged against the Italians. By the time of the Armistice, there were only a handful of remaining Voughts in French hands, and the type was phased out of service.

Chesapeakes were obtained by the Fleet Air Arm in July 1941, and used to equip a reformed 811 Naval Air Squadron whose crews referred to it as the 'cheesecake'. The squadron was intended to use them for anti-submarine patrols and was earmarked for the escort carrier HMS Archer.

By the end of October that year, it had been decided that the Chesapeakes were under-powered for the planned duties and would not be able to lift a sensible warload from the small escort carriers. Accordingly, they were withdrawn and 811 NAS was re-equipped with the Fairey Swordfish.

The SB2U was of conventional low-wing tailwheel monoplane configuration, with the pilot and tailgunner seated in tandem under a long greenhouse-style canopy. Its only remarkable design feature was a propeller with reversible pitch, allowing it to be used to brake the aircraft during a dive bombing attack.