The North American B-25 Mitchell (North American NA-62) was an American twin-engined medium bomber manufactured by North American Aviation. It was used with devastating effect against German and Japanese targets in every combat theater of World War II. The aircraft was named the "Mitchell" in honor of General Billy Mitchell, an early air power pioneer and advocate of an independent United States Air Force. The B-25 Mitchell is the only American military aircraft named after a specific person. By the end of its production, nearly 10,000 B-25s in numerous models had been built. These included a few limited variations, such as the US Navy's PBJ-1 patrol bomber and the Army Air Forces' F-10 photo reconnaissance aircraft. 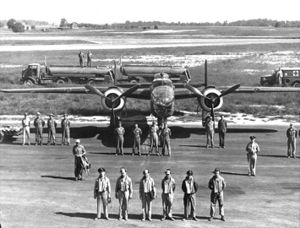 Lt. Peddy and crew, with a portrayal of how many it takes to keep one flying. 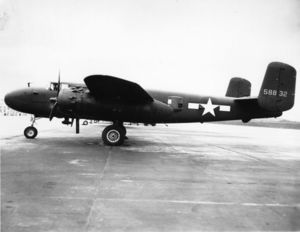 Flight Performance School also included work in evaluating the performance of this B-25 Mitchell medium bomber.

The B-25 was a descendant of the earlier XB-21 (North American-39) project of the mid-1930s. Experience gained in developing that aircraft was eventually used by North American in designing the B-25 (called the NA-40 by the company). One NA-40 was built, with several modifications later being done to test a number of potential improvements. These improvements included Wright R-2600 radial engines, which would become standard on the later B-25.

In 1939, the modified and improved NA-40B was submitted to the United States Army Air Corps for evaluation. This plane was originally intended to be an attack bomber for export to the United Kingdom and France, both of which had a pressing requirement for such aircraft in the early stages of World War II. However, those countries changed their minds, opting instead for the also-new Douglas A-20 Havoc. Despite this loss of sales, the NA-40B re-entered the spotlight when the Army Air Corps evaluated it for use as a medium bomber. Unfortunately, the NA-40B was destroyed in a crash on 11 April 1939. Nonetheless, the type was ordered into production, along with the Army's other new medium bomber, the Martin B-26 Marauder. 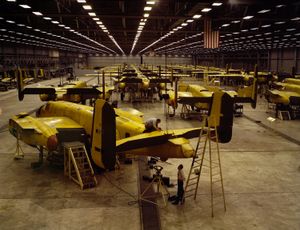 Mitchell production in Kansas City in 1942.

An improvement of the NA-40B, dubbed the NA-62, was the basis for the first actual B-25. Due to the pressing need for medium bombers by the Army, no experimental or service-test versions were built. Any necessary modifications were made during production runs, or to existing aircraft at field modification centers around the world.

A significant change in the early days of B-25 production was a re-design of the wing. In the first nine aircraft, a constant-dihedral wing was used, in which the wing had a consistent, straight, slight upward angle from the fuselage to the wing tip. This design caused stability problems, and as a result, the dihedral angle was nullified on the outboard wing sections, giving the B-25 its slightly gull wing configuration. Less noticeable changes during this period included an increase in the size of the tail fins and a decrease in their inward cant.

A total of 6,608 B-25s were built at North American's Fairfax Airport plant in Kansas City, Kansas. 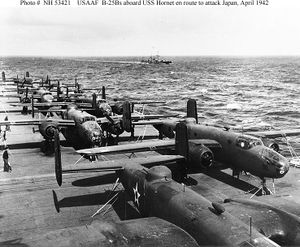 The B-25 first gained fame as the bomber used in the April 1942 Doolittle Raid, in which 16 B-25Bs, led by the legendary Lt. Col. Jimmy Doolittle, took off from the carrier USS Hornet and successfully bombed Tokyo and four other Japanese cities without loss to themselves. However, 15 of the planes subsequently crash-landed in Eastern China en route to their recovery fields in that country. These losses were the result of fuel exhaustion, stormy nighttime conditions with zero visibility, and the lack of electronic homing aids at the recovery bases. Only one B-25B landed intact; it came down in Russia, where its five-man crew was interned and the aircraft confiscated. Fortunately, 71 of the 80 Doolittle Raid crewmen survived their historic mission and eventually made it back to American lines.

Following a number of additional modifications, including the addition of Plexiglas windows for the navigator and radio operator, heavier nose armament, and de-icing and anti-icing equipment, the B-25C version was released to the Army. This was the second mass-produced version of the Mitchell, the first being the lightly-armed B-25B used by the Doolittle Raiders. The B-25C and B-25D were identical, the only difference being their location of manufacture. The B-25C was built in Inglewood, California, while the B-25D was made in Kansas City, Kansas. A total of 3,915 B-25Cs and B-25Ds were built by North American during World War II. Although the B-25 was originally designed to bomb from medium altitudes in level flight, it was used frequently in the Southwest Pacific theater (SWPA) on treetop-level strafing and parafrag missions against Japanese airfields in New Guinea and the Philippines. These heavily-armed Mitchells, field-modified by engineering genius Major Paul Irving "Pappy" Gunn, were also used on strafing and skip-bombing missions against Japanese shipping trying to re-supply their land-based armies. Under the brilliant leadership of Lt. Gen. George C. Kenney, B-25s of the 5th and 13th Air Forces devastated Japanese targets in the SWPA from 1942 to 1945, and played a significant role in pushing the Japanese back to their home islands. B-25s were also used with devastating effect in the Central Pacific, Alaska, North Africa, Mediterranean and China-Burma-India theaters. 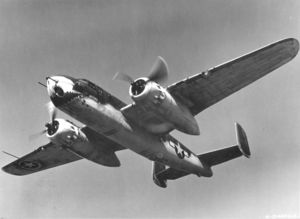 Because of the urgent need for hard-hitting strafer aircraft, a version of the B-25 dubbed the B-25G was developed, in which the standard-length transparent nose and the bombardier were replaced by a shorter, solid nose containing two fixed .50-calibre machine guns and a 75 mm M4 cannon. The latter was the largest calibre weapon ever used in an American bomber. The cannon was manually loaded and serviced by the navigator, who was able to perform these operations without leaving his crew station just behind the pilots. This was possible due to the shorter nose of the G-model and the long length of the M4, which allowed the gun's breech to extend into the navigator's compartment. The B-25G’s successor, the B-25H, had even more firepower. The 75mm gun was the lighter T13E1 which had been designed specifically for the B-25H. It also mounted six fixed forward-firing .50-calibre machine guns, two more in the top turret, one each in a pair of new waist positions, and a final two in a new tail gunner's position. Fourteen hundred B-25Gs and B-25Hs were built. The 75mm cannon fired at a muzzle velocity of 2,362 fps, about 720 m/s.

The final version of the Mitchell, the B-25J, looked much like the earlier B, C and D models, having reverted to the longer nose section as used in those types. The less-than-successful, 75 mm cannon was deleted on the J model. Instead, 800 of this version were built with a solid nose containing eight .50-caliber machine guns, while other J-models featured the earlier "greenhouse" style nose containing the bombardier's position. Regardless of the nose style used, all J-models also included two .50 caliber guns in a "fuselage package" located directly under the pilot's station, and two more such guns in an identical package just under the co-pilot's compartment. The solid-nose B-25J variant carried an impressive total of 18 .50-caliber guns: eight in the nose, four in under-cockpit packages, two in an upper turret, two in the waist compartment, and a pair in the tail position. No other bomber of World War II carried as many guns. In all, 4,318 B-25Js were built. The B-25 was a safe and forgiving aircraft to fly. With an engine out, 60° banking turns into the dead engine were possible, and control could be easily maintained down to 145 mph (230 km/h). The tricycle landing gear made for excellent visibility while taxiing. The only significant complaint about the B-25 was the extremely high noise level produced by its engines; as a result, many pilots eventually suffered from various degrees of hearing loss (Higham 1978). 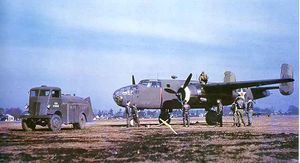 The Mitchell was also an amazingly sturdy aircraft that could withstand tremendous punishment. One well-known B-25C of the 321st Bomb Group was nicknamed "Patches" because its crew chief painted all the aircraft's flak hole patches with high-visibility zinc chromate paint. By the end of the war, this aircraft had completed over 300 missions, was belly-landed half a dozen times and sported over 400 patched holes. The airframe was so bent that straight-and-level flight required 8° of left aileron trim and 6° of right rudder, causing the aircraft to "crab" sideways across the sky.

An interesting characteristic of the B-25 was that its range could be extended by using one-quarter wing flap settings. Since the aircraft normally cruised in a slightly nose-high attitude, about 40 US gallons (150 l) of fuel was below the fuel pickup point and thus unavailable for use. The flaps-down setting gave the aircraft a more level flight attitude, which resulted in this fuel becoming available, thus slightly extending the plane's range (Higham 1975).

The B-25 is featured in the book Catch-22, and in the movies Thirty Seconds over Tokyo (one pilot's account of the Doolittle Raid), Pearl Harbor and Catch-22, which features a large number of B-25s in flying condition. A meticulously restored B-25, painted and marked as Jimmy Doolittle's aircraft, is on permanent display at the National Museum of the United States Air Force in Dayton, Ohio.

On Saturday, 28 July 1945, at 9:49 am, (while flying in thick fog), a B-25 crashed into the north side of Empire State Building, hitting between the 79th and 80th floor. Fourteen people were killed - 11 in the building, along with Colonel William Smith and the other two occupants of the plane. [1]

In 1942, two B-25Cs were converted to test aircraft in order to investigate de-icing and anti-icing equipment; these planes were redesignated XB-25E and XB-25F. The XB-25E (nicknamed "Flamin’ Maimie") used engine exhaust gases circulated through chambers in the wing to melt ice. The XB-25F used insulated electrical coils to heat the metal surfaces. Both were tested extensively until 1944; the XB-25E system was extremely reliable and more practical than the XB-25F system.

While the results of the tests on the XB-25E were promising, no aircraft during World War II was built to utilise that system, although it is commonly used today. Most propeller-driven planes used by the United States Air Force use so-called "piccolo tubes" that run along the leading edges of the wings. Hot air bled from the engines is blown through these tubes, and melts away any ice formations on the wings.

A descendant of the B-25 was the XB-28 Dragon, meant to be a high-altitude version of the B-25. Despite this premise, the actual aircraft bore little resemblance to the Mitchell. It had much more in common with the B-26 Marauder. Units using the B-25 during World War II

The B-25 was flown by a number of Allied forces in addition to the Army Air Forces and the US Navy. These nations included Australia, the United Kingdom (which received more than 900), China, The Netherlands and the Soviet Union. B-25 Mitchell bombers from No. 18 (NEI) Squadron RAAF on a training flight near Canberra in 1942 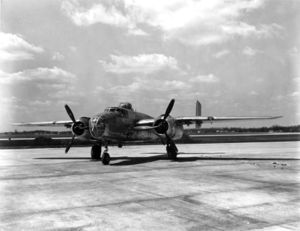 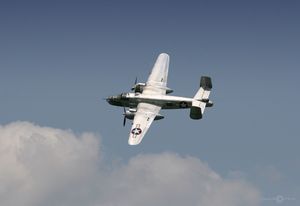 A B-25 Mitchell at a modern airshow