The Northrop F-20 Tigershark (initially F-5G) was a privately financed fighter aircraft, designed and built by Northrop in the USA, starting in 1975 and offered for sale starting in the 1980s and formally ending in the early 1990s.

It began as a further evolution of Northrop's F-5 Freedom Fighter/Tiger II, although ultimately it shared little more than a strong family resemblance to that aircraft. 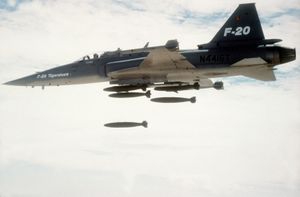 An air-to-air left side view of a Northrop F-20 Tigershark aircraft dropping practice bombs during a demonstration.

It was originally designated F-5G, which was approved by the USAF in May 1981. The initial request for F-20 was initially turned down in 1982, the USAF proposing F-19 which ended up not being used at all. The USAF gave approval for F-20 designation use in November 1982 and of the extra name Tigershark in March 1983.

The main change was the replacement of the F-5's two General Electric J85 engines with a single General Electric F404 turbofan, increasing its total thrust by 60%. Like the F-5, however, it was designed as a low-cost, high-performance fighter plane that was easy to maintain. It could reach speeds of Mach 2.1 and had a ferry range of 1,715 miles (2,760 km). The aircraft was armed with General Electric AN/APG-67 radar that offered significant performance improvement over the original Emerson AN/APQ-159 radar of the original F-5E/F.

The F-20 made its first flight on August 30, 1982, and a total of three prototypes were created. It was intended for sale to foreign countries and militaries, but the market for the plane never developed, as President Ronald Reagan relaxed the restrictions on selling fighters such as the F-16 Fighting Falcon to other countries. Also, the fact that the United States government had not placed an order for the aircraft had a large effect on the decisions of other countries to buy the F-20 or not. The Pakistan Air Force was offered the F-20 and A-10 Thunderbolt II, but insisted on choosing the F-16 because it was felt that it would give them a technological advantage.

After six years and no major buyers, Northrop cancelled the $1.2 billion project. Air forces that could afford the F-20 bought the F-16, while ones which could buy neither, purchased the cheaper F-5E/F Tiger II or the Russian MiG-21. While its performance was comparable to the Block 1/5/10 F-16 and superior to the turbojet-powered export-variant F-16/79, the F-20 airframe had virtually no remaining expansion capability, as it was built on essentially a 20 year old airframe at the limits of its capabilities. The F-20's low-set wing and wing-mounted undercarriage also limited the size and number (four underwing hardpoints on the F-20 vs. six on the F-16) of underwing stores that could be used; the F-16 later would often be seen with very large stores. The F-16, on the other hand, was a brand-new jet that had not even begun to approach its eventual capabilities. There was speculation within the F-20 development team that the US Air Force influenced foreign militaries to buy the F-16, in order to make spare parts more available.

The last existing F-20 is on display at the California Science Center. The other two prototypes were lost due to crashes during world sales tours. The crashes were caused by pilot error, and were not linked to any malfunction of the planes.

Aerospace legend Chuck Yeager, who worked as a spokesperson for Northrop during the F-20's development, frequently touted the plane and was regularly featured in its advertising. 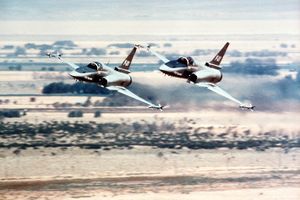 Though the aircraft did not achieve sales, it had a number of evaluations where it was close to being sold. Many ended up going with the F-16 Fighting Falcon, which due to lower export restrictions became much more available (such as Venezuela, which had been considering the F-20). Taiwan became a similar case, whose bid for licensed production was blocked by the US government for political reasons. Taiwan ended up using F-16 and developing the AIDC F-CK-1 Ching-kuo. Sweden was another loss case, the 'F-5S' (a F-20 version for Sweden) was also passed over in favor of developing the JAS 39 Gripen fighter aircraft.[citation needed] Sweden did however use a derivative of the F-20's F404 engine for the Gripen. In 1985 negotiations were under way to supplement the Royal Moroccan Air Force fleet of attack aircraft that were too old or were shot down. 20 were to be obtained but the F-20 was cancelled and so were the negotiations. In the 1990s the aircraft was offered to India. [1] The aircraft was also offered to the U.S. for a number of different tasks in the same period, all of which came to nothing (again the F-16 was chosen for some of tasks). [2]