The McDonnell F3H Demon was a United States Navy carrier-based jet fighter aircraft. The successor to the F2H Banshee, after initial problems, it served from 1956 until 1964.

Development work began in 1949. The aircraft was designed around only a single Westinghouse J40 engine, which was to have thrust of over 11,000 lbf (49 kN)—three times that of the engines in the Banshee. It was the first swept-wing design produced by McDonnell and among the first U.S. aircraft to have missile armament.

The prototype first flew on 7th August 1951 flown by test pilot Robert Edholm, and first test flights of the operational design were in January 1953. The engine was a major disappointment, producing only half of the expected power. Worse, it was temperamental and unreliable. Of 35 F3H-1N aircraft flown with the J40 engine, eight were involved in major accidents. The J40-engined aircraft were grounded and a new engine was sought. The proposed F3H-1P reconnaissance version was never built.

The best alternative was the Allison J71 engine which was also used in the B-66 Destroyer. Subsequent F3Hs with this engine were designated the F3H-2N. Use of this engine required an enlarged wing and redesigned fuselage. In service, the J71 proved problematic, providing insufficient power for an aircraft of the Demon's size. The engine also suffered from frequent flameouts and compressor stalls. The first Demon with a J71 flew in October 1954. Another significant problem was the reliability of the ejection seats: initial versions would found to be unreliable and were eventually replaced with Martin-Baker ejection seats that were becoming the standard Navy seat of choice due to their higher performance at low altitude and better reliability.

Despite the problems, the Navy ordered 239 F3H-2s, and the first were deployed in March 1956. 519 Demons were built up to the end of production in November 1959. It was the Navy's first all-weather interceptor with radar (the AN/APG-51 air interception set).

The F3H-2N's standard armament was four 20 mm Colt Mk 12 cannon. In later years the upper two cannon were often omitted. Later models, redesignated F3H-2M, were equipped to fire the Raytheon AAM-N-2 Sparrow and later the Sidewinder air-to-air missiles. Deployed aircraft carried both types of missiles, the Sparrow on the inboard rails and the Sidewinder outboard. In air carrier air defense applications cannons were not used, but they were installed and armed when situations (such as the Cuban Missile Crisis) dictated, where the aircraft might be deployed against surface watercraft.

A reconnaissance version, the F3H-2P, was proposed, but never built. It remained the Navy's front-line fighter until 1962, when it was succeeded by the F-4 Phantom II (which was a development of a proposed "Super Demon," a larger and much heavier version of the F3H; this concept would again see life in the 21st century with the F/A-18E/F Super Hornet, a much larger and more capable version of the F/A-18 Hornet). Although developed during the Korean War, it did not see action, although it flew over Lebanon and Quemoy in 1958.

Due to excellent visibility from the cockpit, the Demon earned the nickname "The Chair." Demon pilots were known colloquially as "Demon Drivers" and those who worked on the aircraft were known as "Demon Doctors." 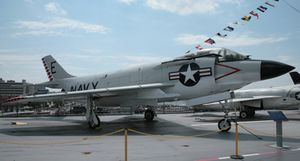 F3H-2N (F-3B) Demon on the deck of the Intrepid Sea-Air-Space Museum.