The McDonnell XF-88 Voodoo was a long-range, twin-engine jet fighter aircraft designed for the United States Air Force. Although it never entered service, its design was adapted for the subsequent F-101 Voodoo.

The XF-88 originated from a 1946 United States Army Air Forces requirement for a long-range 'penetration fighter' to escort bombers to their targets. It was to be essentially a jet-powered replacement for the wartime P-51 Mustang that had escorted B-17 Flying Fortress bombers over Germany. It was to have a combat radius of 900 miles (1,450 km) and high performance. McDonnell began work on the aircraft, dubbed Model 36, on 1 April 1946. On 20 June the company was given a contract for two prototypes, designated XP-88.

The initial design was intended to have a V-shaped tail, but wind tunnel tests indicated aerodynamic problems that led to an extensive redesign. The Air Force (which became the USAF on 17 September 1947) approved the changes. When the USAF altered its designation scheme in 1948, the still unflown prototypes were redesignated XF-88. It was dubbed Voodoo.

The Voodoo had a low/mid-mounted wing, swept to 35°. The two engines were in the lower fuselage, with jetpipes beneath the rear fuselage. The prototypes carried XJ34 engines, although the production F-88A would have had two Westinghouse J46 turbojets with 26.33 kN (5,920 lbf) thrust each. Intakes were mounted in the wing roots. The Voodoo's short nose had no radar, being intended to house an armament of six 20mm M39 cannon.

The first XF-88 made its maiden flight on 20 October 1948. It had non-afterburning engines and no armament. It proved to be underpowered, leading to the decision to install afterburners on the second prototype, which was designated XF-88A and made its first flight on 26 April 1949. (The first prototype was modified to the same standard.)

In a subsequent paper competition against the Lockheed XF-90 and North American XF-93, the Voodoo lost to the XF-93, but the decision on production was later delayed until a 'fly-off' competition could be held. In that fly-off, held in the summer of 1950, the Voodoo proved the winner, but changes in Air Force requirements led the penetration fighter to be cancelled entirely.

McDonnell proposed a naval version of the XF-88, a two-seat operational trainer, and a reconnaissance variant, but none were built. The first prototype was modified to XF-88B standard, with a nose-mounted turboprop engine added to the two existing turbojets. This was used for flight testing through 1956, and achieved speeds close to and possibly exceeding Mach 1.0, the first propeller-driven aircraft to do so. Both prototypes were scrapped by 1958.

A considerably enlarged version of the basic design was developed following the cancellation of the XF-88, becoming the F-101 Voodoo, the first production version of which flew on 29 September 1954. 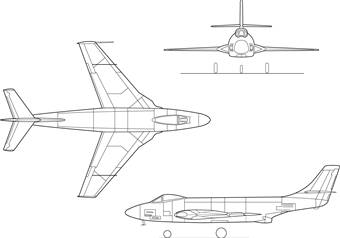