The Northrop YF-17 (unofficially nicknamed "Cobra") was a prototype lightweight day fighter aircraft designed for the United States Air Force's Light Weight Fighter (LWF) technology evaluation program. The LWF was created because many in the fighter community believed that aircraft like the F-15 Eagle were too large and expensive for many combat roles. It was the culmination of a long line of Northrop designs, beginning with the N-102 Fang in 1956, continuing through the F-5 series.

Although it lost the LWF competition to the F-16, the YF-17 was selected for the new VFAX specification. In enlarged form, the F/A-18 Hornet was adopted by the United States Navy and United States Marine Corps to replace the A-7 Corsair II and F-4 Phantom II, complementing the more expensive F-14 Tomcat.[1] This design, conceived as a lightweight fighter would ironically be scaled up to the F/A-18E/F Super Hornet, which is similar in size to the original F-15 Eagle. The Super Hornet has replaced the F-14 Tomcat in the U.S. inventory and performs all jet combat aircraft roles in the Navy from attack to fighter, tanker and electronic warfare.

The aircraft's main design elements date to early 1965, from the internal Northrop project N-300. The N300 was itself based on the F-5E, modified with a stretched fuselage, small leading-edge root extensions (LERX), and more powerful GE15-J1A1 turbojets, rated at 9,000 pound force (lbf) each. The wing was moved higher on the fuselage to increase ordnance flexibility. The N-300 further evolved into the P-530 Cobra, utilizing 13,000 lbf GE15J1A5 engines, with a very small .25 bypass ratio. The bypass effectively was only a cooling stream for the rear of the engine, leading to the nickname "leaky turbojet", allowing the engine bay to be constructed of lighter, cheaper materials.[1]

The P-530's wing planform and nose section was similar to the F-5, with a trapezoidal shape formed by a sweep of 20° at the quarter-chord line, and an unswept trailing edge, but was over double the area, with 400 square feet as opposed to the 186 of the F-5E. Initially shoulder mounted, the wings were gradually shifted down to the mid position. Its most distinctive new feature were the LERXs, that tapered into the fuselage under the cockpit. They enabled maneuvering at angles of attack exceeding 50°, by providing about 50% additional lift. The extensions also smoothed airflow into the engine inlets at high angles of attack. The resemblance to the head of a cobra lead to the adoption of the nickname "Cobra", often unofficially used for the YF-17.[2] Studies showed a single vertical stabilizer was insufficient at high angles of attack, and it was changed to twin vertical stabilizers, canted at 45°. The result was an aircraft that had relaxed longitudinal stability, enhancing maneuverability. However, Northrop was not yet confident in fly-by-wire controls and retained mechanically signaled flight controls. The resulting aircraft, unveiled on 28 January 1971, advertised a max weight of 40,000 pounds and maximum speed of Mach 2, but stirred little interest among foreign buyers.

The YF-17 was primarily constructed of aluminum, in conventional semi-monocoque stressed-skin construction, though over 900 pounds of its structure were graphite/epoxy composite. The small nose contained a simple ranging radar. The cockpit sported an ejection seat inclined at 18°, a bubble canopy, and a heads-up display. The thin wings carried no fuel, and in areas such as the leading and trailing edge and the LERX, were composed of a Nomex honeycomb core with composite facesheets. The rear of the aircraft sported twin all-moving stabilators of aluminum over a honeycomb core, and twin vertical stabilizers of a conventional construction. Like the wings, the leading and trailing edges were constructed of composite facesheets over honeycomb core. A composite speedbrake was located above and between the engines.

The aircraft was powered by a pair of 14,400-lbf General Electric YJ101-GE-110 turbofans, a development of the GE15, mounted next to each other to minimize thrust asymmetry in the event of an engine loss. For ease of maintentance, the engines are mounted in a steady-rest that allows removal from below the aircraft, without disturbing the empennage controls. Each engine drove an independent hydraulic system. Unlike the P530, the YF-17 sported a partial fly-by-wire control scheme, formally called the electronic control augmentation system (CAS), utilizing ailerons, rudders, and stabilators for primary flight control.

When the Light Weight Fighter program was announced in 1971, Northrop modified the P530 into the P600 design that would be designated the YF-17A. Whereas the P530 was intended as a multi-role aircraft, the P600 was to be strictly an air-to-air demonstrator, and consequently the cannon moved from the underside of the fuselage, to the upper part. Design of the YF-17 and the prototype YJ101 engine (a development of the GE15 engine), consumed over a million man-hours, and 5,000 hours of wind tunnel testing. 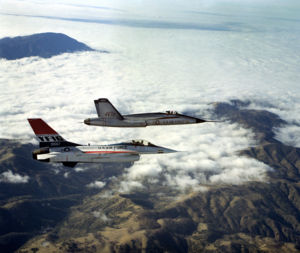 An air-to-air right side view of a YF-16 aircraft and a YF-17 aircraft, side-by-side, armed with AIM-9 Sidewinder missiles.

The U.S. Navy was a small participant on the LWF program. In August 1974, Congress directed the Navy to make maximum use of the technology and hardware of the LWF for its new lightweight strike fighter, the VFAX.[citation needed] As neither contractor had experience with naval fighters, they sought partners to provide that expertise. General Dynamics teamed with LTV Aerospace; Northrop with McDonnell Douglas. Each submitted revised designs in line with the Navy needs for a long-range radar and multirole capabilities.[3] 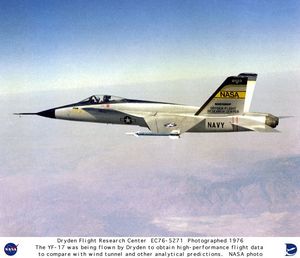