The YC-15 was McDonnell Douglas' entrant into the U.S. Air Force's Advanced Medium STOL Transport (AMST) competition, to replace the C-130 Hercules as the USAF's standard STOL tactical transport. In the end neither aircraft was ordered into production, although the YC-15's basic design would be used to form the successful McDonnell Douglas C-17] of the 1990s.

In 1971 the USAF started work on a series of prototype proposals, which would lead to both the AMST project and the Light Weight Fighter. The official RFP was issued in January 1972, asking for operations into a 2,000 foot semi-prepared field at 500 nmi with a 27,000 lb payload in both directions with no refueling. For comparison, the C-130 of that era required about 4,000 ft for this load. Five companies submitted designs at this stage of the competition, Boeing with their Model 953 in March 1972. On 10 November 1972 the downselect was carried out, and Boeing and McDonnell Douglas won development contracts for two prototypes each.

McDonnell Douglas's design incorporated a supercritical wing, the result of NASA research carried out by the already famous Richard Whitcomb. This wing design dramatically lowers transonic wave drag by as much as 30% compared to more conventional profiles, while at the same time offering excellent low-speed lift. Most contemporary aircraft used swept wings to lower wave drag, but this led to poor low-speed handling, which made them unsuitable for STOL operations.

The design team also chose to use externally-blown flaps to increase lift. This system uses double-slotted flaps to direct part of the jet exhaust downwards, while the rest of the exhaust passed through the flap and then followed the downward curve due to the Coandă effect. Although the effects had been studied for some time at NASA, along with similar concepts, until the introduction of the turbofan the hot and concentrated exhaust of existing engines made the system difficult to use. By the time of the AMST project, engines had changed dramatically and now provided larger volumes of less-concentrated and much cooler air. For the YC-15 four small engines were used, versions of the Pratt & Whitney JT8D widely used on the Boeing 727 modified with an extra fan stage at the rear of the engine to increase the cool air flow.

Boeing's design was generally similar, and also utilized a supercritical wing. Where the two differed was in the placement of the engines. Boeing's design used "upper surface blowing" in place of the externally-blown flap (although it is in effect a subtype). This system allowed them to place two larger engines close to the wing root, using a diffuser to spread the exhaust over the upper surface. They felt this arrangement offered safety margins in case of an engine failure on one side, whereas the under-wing system on the YC-15 would lead to significant asymmetric lift.

The first flight was August 26, 1975. The second prototype followed in December. They were tested for some time at McDonnell Douglas as the Boeing entry was not ready until almost a year later. In November 1976 both designs were transfered to Edwards Air Force Base for head-to-head testing, including lifting heavy loads like tanks and artillery from dirt airfields at Graham Ranch, off the end of Runway 22.

The YC-15s completed a 600 hour flight test program in 1977.Generally pilots favored the Boeing design, as its advanced flight control system made it fly like a fighter. After the flight test program, the two aircraft were stored at the AMARC. located at Davis-Monthan Air Force Base. One was subsequently displayed at the nearby Pima Air & Space Museum.

By this point the seeds of the AMST program's demise had already been sown. In March 1976 the Air Force Chief of Staff Gen. David C. Jones asked the Air Force Systems Command to see if it was possible to use a single model of the AMST for both strategic and tactical airlift roles, or alternately, if it was possible to develop non-STOL derivatives of the AMST for the strategic airlift role. This led to a series of studies which basically stated that such a modification was not easy, and would require major changes to either design to produce a much larger aircraft.

Although the YC-14 and YC-15 both met or exceeded the specifications of the contest, the increasing importance of the strategic vs. tactical mission eventually led the Air Force to conclude that they were better off with an updated C-130 in the short term. The AMST program was canceled in 1979. In January 1979 and the C-X Task Force formed to develop the required strategic aicraft. The C-X eventually became the C-17 Globemaster III, developed on the basis of the YC-15.

AMARC's YC-15, 72-1875, was later returned to flying status by McDonnell Douglas in 1996, and resumed flying in April 1997. The intention was to use the YC-15 to evaluate new technology for advanced tactical transports. After an engine failed, the aircraft was deemed too expensive to repair and was returned to storage. 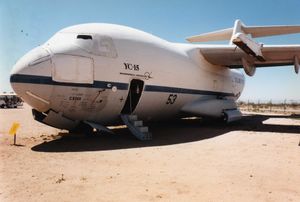 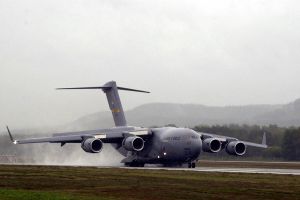 The C-17 Globemaster III, derived from the YC-15, shares a similar configuration.