The Douglas TBD Devastator was a torpedo bomber of the United States Navy, ordered in 1934, first flying in 1935 and entering service in 1937. At that point, it was the most advanced aircraft flying for the USN and possibly for any navy in the world. However, the fast pace of aircraft development caught up with it, and by the time of the Japanese attack on Pearl Harbor the TBD was already outdated. It performed well in some early battles, but in the Battle of Midway the Devastators launched against the Japanese fleet were almost totally wiped out. The type was immediately withdrawn from front line service, replaced by the Grumman TBF Avenger. 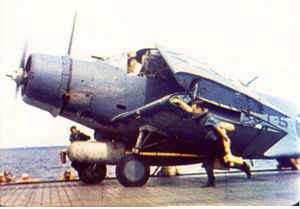 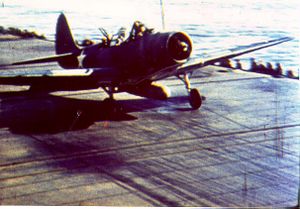 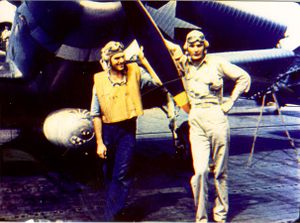 The TBD Devastator marked a large number of "firsts" for the U.S. Navy. It was the first widely-used carrier-based monoplane as well as the first all-metal aircraft, the first with a totally enclosed cockpit, the first with hydraulically folding wings; it is fair to say that the TBD was revolutionary. A semi-retractable undercarriage was fitted, with the wheels designed to protrude ten inches (250 mm) below the wings to permit a "wheels-up" landing with only minimal damage.

A crew of three was carried beneath a large "greenhouse" canopy almost half the length of the aircrft. The pilot, of course, sat up front; a rear gunner/radio operator took the rearmost seat, while the bombardier occupied the middle seat. During a bombing run, the bombardier lay prone, sliding into position under the pilot to sight through a window in the bottom of the fuselage, using the Norden Bombsight. The offensive armament that he targeted would be either a single Bliss-Leavitt Mark XIII aerial torpedo or a single 1000 lb (450 kg) bomb. Defensive armament consisted of either a .30 or .50 cal (7.62 or 12.7 mm) machine gun firing forwards, and a .30 caliber (7.62 mm) machine gun for the rear gunner.

The U.S. Navy became aware by about 1940 that the TBD had become outclassed by the fighters and bombers of other nations and a replacement (the TBF Avenger) was in the works, but it was not in service yet when the United States entered World War II. By then, training attrition had reduced their numbers to just over 100 aircraft. The Devastator had become a death trap for its crews; slow and poorly maneuverable, with light defensive weaponry and poor armor relative to the weapons of the time. Its speed on a glide-bombing approach was a mere 200 miles per hour, making it easy prey for fighters and defensive guns alike. The aerial torpedo could not even be released at speeds above 100 knots [1].

In the early days of the Pacific war, the TBD acquitted itself well during February and March 1942 and in the Battle of the Coral Sea, in which Devastators helped sink the Japanese aircraft carrier Shōhō.

Problems were discovered with the Mark XIII torpedo at this point. Many were seen to hit the target yet fail to explode; there was also a tendency to run deeper than the set depth. It took over a year for the problems to be corrected.

These problems were not fixed by the time of the Battle of Midway on 4 June 1942. Forty-one Devastators were launched from USS Hornet, USS Enterprise and USS Yorktown to attack the Japanese fleet. Their fighter escort lost contact, and the TBDs started their attacks without fighter protection. Torpedo delivery requires a long, straight-line attack run, making the aircraft vulnerable anyway, and the slow speed of the aircraft made them sitting ducks for the Mitsubishi Zeros. Only four TBDs made it back to the Enterprise, none to the Hornet or Yorktown. Worse, not a single torpedo hit its target. However, their sacrifice was not in vain; the suicidally heroic actions of the Devastator aircrews that day drew the Japanese air cover out of position just as the Japanese carriers were refueling and rearming their bombers, a window of opportunity exploited by the late-arriving SBD Dauntless dive-bombers led by Lieutenant Commander C. Wade McClusky.

The Navy immediately withdrew the TBD from front line units after Midway; in any case, there were only 39 aircraft left. They remained in service briefly in the Atlantic and in training squadrons until 1944. The last TBD in the U.S. Navy was used by the Commander of Fleet Air Activities-West Coast. When his TBD was scrapped in November 1944, there were no more[2]. None survived the war.

In fairness to the type, the disaster of the Battle of Midway was as much due to the vulnerability of torpedo bombers against AAA fire and defending fighters. Without a fighter escort to keep off the Zeroes and distract the shipborne AAA guns, not even TBF Avengers escaped nearly as heavy losses. 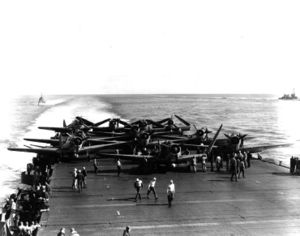 VT-6 TBDs on the USS Enterprise, during the Battle of Midway

There are no Devastators in any collection or museum. Several wrecks are known and are being investigated for possible salvage and restoration: