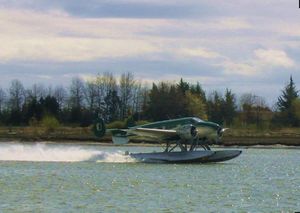 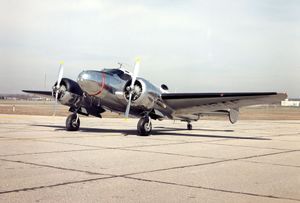 The Beechcraft Model 18, or "Twin Beech", as it was better known, is a 6-11 place, twin-engine, low-wing, conventional-gear aircraft that was manufactured by the Beech Aircraft Corporation of Wichita, Kansas. Construction was all-metal semi-monocoque with fabric covered control surfaces. This model saw service during and after World War II in a number of versions including the United States Army Air Forces C-45 Expeditor, AT-7 Navigator, AT-11 Kansan, and for the United States Navy, UC-45J Navigator, the SNB-1 Kansan. An estimated aggregate total time in service for the aircraft time is in excess of 20,000,000 hours of flight time.

The Beech 18 is the most modified US-certified aircraft design, with over 200 FAA approved Supplemental Type Certificates on record for the aircraft.

By the late '30s the winds of war had blown across Europe. Beechcraft management knew the company would be called upon to help the allied cause and they bet the future on increased production facilities and a new all metal twin-engine design dubbed the Model 18.

China sent the company $750,000 in return for light bombers based on the design, but by the beginning of the war only 39 Model 18s had been sold. Work began in earnest on a variant speecifically for training fledgling military pilots, bombardiers, and navigators. The effort resulted in the Army AT-7 and Navy SNB. Further development led to the AT-11 and SNB-2 navigation trainers and the C-45 military transport. There was even, eventually, an experimental XA-38 attack version with a huge cannon in the nose, although it never went into production.

Construction of the Beechcraft Model 18 ended in 1970 with the last Model 18 built going to Japan Airlines. Beechcraft set a record that still stands today for longest continuous production of a piston engine aircraft. Through the years, 32 variations of the basic design had flown, over 200 improvement modification kits were developed, and almost 8,000 aircraft had been built. The C-45 flew in Air Force colors until 1963, the Navy retired their last SNB in 1972, and the Army flew their C-45s through 1976.

The aircraft has used a variety of engines and has had a number of airframe modifications to increase gross weight and speed. At least one aircraft was modified to a 600 horse power R-1340 Pratt and Whitney powerplant configuration. The added weight of approximately 200 pounds per engine with R-1340 engine was not satisfactory due to the weakest structural area of the aircraft being the engine mounts. With the exception of the center truss, the central component around which the entire aircraft is built, nearly every airframe component has been modified at one time or another.

Some aircraft were almost unrecognizable as having originated as a Beech 18. In one case the aircraft was modified to a triple tail, tri-gear, hump backed configuration and appeared similar to a miniature Lockheed Constellation.

Some of the modifications created by independent engineering entrepreneurs were adopted in concept by the factory in later production versions in similar fashion to the current practice Harley Davidson copying of custom motorcycles built in the 1960s and 1970s. Among the most notable cooling air and exhaust modifications were those engineered by Benjamin Israel while employed by Conrad Conversions. His modifications were based largely on creating a more efficient use of cooling air to reduce cooling drag, a major detriment to aircraft cruise performance. The difference in cruise performance was a significant 10% or better at the same power settings as before the modifications. These modifications were largely copied on the factory produced G and H models. 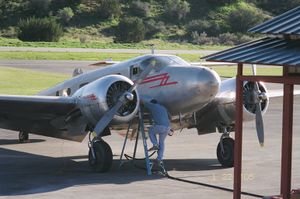 This D-18S Beech is used frequently for skydiving events in the southwestern United States. It was a corporate aircraft for Lay's Potato Chips in the 1950s

A factory option at one point was the addition of JATO bottles on each engine nacelle which added the equivalent of 200 horse power per engine for about 12 seconds. The most successful powerplant upgrade was that of the Pratt and Whitney turbine PT-6 engine and Hartzell propellor. The combination of engine and propellor successfully extended the commercial life of the aging aircraft.