The Beechcraft T-34 Mentor is a propeller-driven, single-engined, military trainer aircraft derived from the Beechcraft Model 35 Bonanza. The earlier versions of the T-34, dating from around the late 1940s to the 1950s, were piston-engined. These were eventually succeeded by an upgraded model powered by a turboprop engine. The T-34 remains in service more than five decades after it was first designed.

The T-34 was the brainchild of Walter Beech, who developed it as a private venture at a time when there was no defense budget for a new trainer model. Beech hoped to sell it as an economical alternative to the North American T-6/NJ Texan, then in use by all services of the U.S. military.

Initial designs for the T-34 included the Bonanza's signature V-tail, but the final design that emerged in 1948 incorporated conventional tail control surfaces for the benefit of the more conservative military. The Bonanza's four-passenger cabin was replaced with a two-seater tandem cockpit and bubble canopy, which provided greater visibility for the trainee pilot and flight instructor.

The first flight of the T-34 was on December 2, 1948, by Beechcraft test pilot Vern Carstens. The United States Air Force ordered three test aircraft, which were given the designation YT-34. A long competition followed to determine a new trainer, and in 1953 the Air Force put the T-34 into service as the T-34A Mentor, while the United States Navy followed in May, 1955 with the T-34B. T-34A production ran from 1953 to 1956, and licensed versions were built in Canada, Japan, and Argentina. The Air Force began to replace the T-34A at the beginning of the 1960s, while the Navy kept the T-34B operational until the early 1970s.

The T-34A and T-34B used a conventional, piston driven engine while the T-34C Turbo Mentor is turboprop-powered. The T-34C is still used as the primary training aircraft for United States Navy and Marine Corps pilots. The T-34C is currently being replaced by the T-6 Texan II but is still the primary aircraft at NAS Corpus Christi and NAS Whiting Field. NAS Pensacola has already completed the transition to the T-6 and the first T-6's are scheduled to arrive at Whiting Field in early 2007.

The Mentor is the aircraft used by the Lima Lima Flight Team and Dragon Flight, both civilian demonstration teams. It is also used by aerobatic pilot Julie Clark, who flies her T-34 "Free Spirit" (registration N134JC) at airshows.

In 2004, due to a series of crashes involving in-flight structural failure during simulated combat flights, the entire U.S. civilian fleet of T-34s was grounded by the Federal Aviation Administration. The grounding has since been eased to a series of restrictions on the permitted flight envelope.

On January 27, 2006 a T-34C Turbo Mentor crashed during training at NAS Corpus Christi. 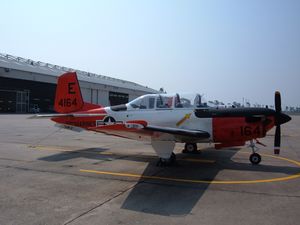