The Beechcraft Starship is a futuristic-looking aircraft designed by Burt Rutan's Scaled Composites and produced by the Beech Aircraft Corporation. It is a six- to eight-seat business transport.

Work began in 1979 when Beechcraft identified a need to replace the King Air model. After a brief hiatus while the company was bought by Raytheon, full development began in 1982 when Beechcraft approached Burt Rutan of Scaled Composites, a leader in the field of novel composite aircraft design. Much of the design work utilised computer-aided design, using the CATIA system.

While in development at Scaled, the 85%-scale prototype was the Model 115, and Beechcraft referred to the production version as the Model 2000. The Model 115 first flew in late August 1983. However, this aircraft had no pressurization system, no certified avionics, and a different airframe design and material specifications than the planned production Model 2000. This aircraft has since been scrapped.

The first full-size Starship flew on February 15, 1986. Prototypes were produced even as development work was continuing — a system demanded by the use of composite materials, as the tooling required is very expensive and has to be built for production use from the outset. The program was delayed several times, at first due to underestimating the development complexity involved and later to overcome technical difficulties concerning the stall-warning system.

The first production Starship flew in late 1988, after over $300 million in development costs.

The Starship was notable for several reasons. First was its all-graphite composite airframe, using high-tech materials instead of aluminum. These materials were in frequent use to varying degrees on military aircraft, but no civilian aircraft certified by the FAA had ever used them so extensively. Composites were chosen in order to reduce the weight of the aircraft which, unfortunately, still came in over its target weight.

Second was its canard design, with the lifting surface aft of the horizontal stabilizer. The aircraft lacks a conventional centrally placed rudder, with yaw control instead provided by small rudders on the wingtips.

Third was its use of a pusher design, in which the turboprop engines were mounted facing the rear and pushed, rather than pulled, the aircraft forward. The pusher design offers a quieter ride, since the gusts of wind and air off the tips of the propellers no longer strike the side of the aircraft, as they do on conventionally configured turboprops. 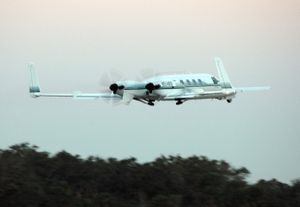 Commercially, the aircraft was a failure, with little demand. Only fifty-three Starships were ever built, and of those only a handful were sold. Many of the aircraft were eventually leased by Raytheon, which allowed the company to control their distribution and operational life. Raytheon considered the cost of supporting a commercial fleet of just 53 aircraft with necessary parts and flight training to be prohibitive. Leasing the aircraft allowed Raytheon to effectively recall and ground the entire fleet at the end of their initial leases.

Reasons for the lack of demand included price, performance, and economic conditions. The list price in 1989 was $3.9 million, similar to the Cessna Citation V and Learjet 31 jets, which were 89 and 124 knots faster than the Starship at maximum cruise, respectively. The Piper Cheyenne turboprop was faster and sold for $1 million less.[1] The Piaggio P.180 Avanti possessed a similar striking design and had considerably better performance. It should be noted that although Beechcraft had high hopes for the distinctive Starship the aircraft failed to meet most of its expected goals for price, performance, handling, cabin size and serviceability.

In 2003, Beechcraft deemed that the aircraft was no longer popular enough to justify its support costs, and has recalled all leased aircraft for scrapping. The company is also said to be aggressively trying to buy back privately-owned Starships, though some Starship owners say they have never been contacted by Raytheon about this. Raytheon no longer offers any support to Starship operators.

Most of the Starships are being ground up and burned at the "boneyard" at the Evergreen Air Center. The planes have little aluminum for recycling. A few have been bought up by private owners who regard them as lovable failures, much like the infamous Ford Edsel. Several can be seen in this satellite photo of the boneyard at Pinal Airpark north of Tucson, Arizona. What appears to be a Starship appears in this photo of Washington Dulles International Airport.

Recently, Starship Model 2000A NC-51 was used as a chase plane during the re-entry phase of Burt Rutan's SpaceShipOne. Several Starships have been donated to museums since the official decommissioning program began, with the Kansas Aviation Museum receiving the first aircraft in August of 2003. Starship N214JB is displayed at the Southern Museum of Flight adjacent to the Birmingham International Airport (US).