The Beechcraft Baron is a light, twin-engined piston aircraft originally developed by Beech Aircraft Corporation and currently manufactured by the Beechcraft Division of Raytheon Aircraft (now Hawker Beechcraft). The Baron is a variant of the Bonanza, and was introduced in 1961. Oddly, Beech also offered a Twin Bonanza line, which featured some design commonality with the Bonanza but in all respects were entirely different airplanes and could not be considered to be true "twin bonanzas".

The progenitor of the Baron was the Beechcraft 95 Travel Air, which incorporated the fuselage of the Bonanza and the tail control surfaces of the T-34 Mentor military trainer. To create the new airplane, Beech replaced the Travel Air's tail with that of the Debonair, streamlined the engine nacelles and rechristened the aircraft Baron.

In 2007 a new Baron cost $1,200,000. Since its inception, the Baron has always been near the top of the light airplane hierarchy. As expensive to operate as it is to buy, the 'next step up' from a Baron is a very big one. Faster aircraft, with greater range and more load-carrying capability are generally turbine-powered and far more expensive.

Beech also produced, in limited quantities, a 56 model Baron, which featured the short fuselage of the 55 series Baron with massive TIO-541 Lycoming engines which were turbocharged and produced 380 hp each. At the time, it was the fastest Beech aircraft, rivaling even the early King-Airs offered by Beech at the time.

A big change in panel/system layout on 58/58TC/58P occurred in 1984, including relocating throttle, gear, flap, propeller and mixture controls to industry-standard positions.

Although the turbocharged 58TC/58P variants were discontinued in 1985, the normally aspirated Baron 58 was still in production as of 2007.

A common complaint is that there is very limited room for the pilot and co-pilot. The main wing spar goes under the pilot's seat thus preventing any ability to lower the seat. Indeed, the seats immediately behind the pilot's can be seen to be noticeably lower by about six inches. Any pilot over 5 ft 5 in tall will have very restricted headroom.

The T-42A Cochise is a military version of the Baron 55 for use by the United States Army as an instrument training aircraft. The Army Aviation School took delivery of 65 aircraft, a further five were bought for delivery to the Turkish Army.

By 1993, the Army's remaining T-42 aircraft had been transferred to the Army Reserve and the National Guard and were no longer in standard use. 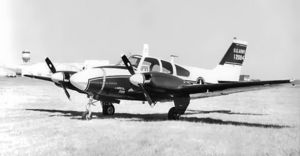