The Beechcraft 1900 Beechliner is a 19-passenger, pressurized twin-engine turboprop airplane manufactured by the Beechcraft Division of the Raytheon Company. It was designed as and is primarily used as a regional airliner, but is also used commercially as a freight aircraft or corporate transport, and by the United States military and other governments.

The Beechliner is designed to carry passengers in all weather conditions from airports with relatively short runways for distances of more than 600 miles. In terms of the number of aircraft built and its continuing popularity, it is the most successful 19-passenger airliner in history.[1]

The 1900 is Beechcraft's third regional airline aircraft. The Beechcraft Model 18 was a 6 to 11 passenger utility aircraft produced from 1937 to 1970, used by the military, airlines, charter operations, corporations for executive transport, and freight carriers. The Beech 18, or "Twin Beech" as it was often called, was hugely successful, with a production run of over 30 years, more than 9,000 built and more approved modifications than any other airplane in history. It remains in common use as a freight aircraft, to carry skydivers, and in many other roles. The 15-passenger Beechcraft Model 99 Airliner was designed to replace the Beech 18, and was produced from 1966 to 1986. It was also successful and remains in common use with freight airlines such as Ameriflight.

The Beechcraft 1900's design heritage began with the Model 50 Twin Bonanza, a five-passenger piston engine driven utility transport produced from 1952 to 1961 for the United States Army and civilian buyers. The Twin Bonanza was very strongly built, and Beechcraft recognized that the "T-Bone's" structure could support a cabin-class aircraft. This gave rise to the larger Model 65 Queen Air, a 9-passenger business transport which retained the wings and many other structural components of the Twin Bonanza. The Queen Air, also piston-driven, was produced from 1960 to 1977. In 1964, Beechcraft married more reliable turboprop engines to the Queen Air's airframe, naming the new aircraft King Air. The King Air is the most successful civilian turboprop aircraft in history, and the most successful business transport. It has been modified many times, and it currently remains in active production in three civilian variants, the King Air 90, 200 and 350. It is also operated by the U.S. military as the C-6 and U-21 Ute, and the C-12 Huron.

The Beechcraft 1900 was developed directly from the King Air 200. The 1900 first flew on September 3, 1982, with Federal Aviation Administration (FAA) certification awarded in November 1983 under Special Federal Aviation Regulation (SFAR) 41C airworthiness standards. Like the 1900, the 1900C was certified under SFAR 41C, but the later 1900D version was certified to FAR Part 23 "Commuter Category" standards.[2]

The 1900 entered service in February 1984, with the first ExecLiner corporate version delivered in 1985. A total of 695 Beechcraft 1900 aircraft were built. This makes the Beechliner the best-selling 19-passenger airliner in history.[1] With market trends favoring larger 50- to 90-seat regional jets, Raytheon ended production of the Beechcraft 1900 in October 2002. Many airlines continue to fly the 1900. 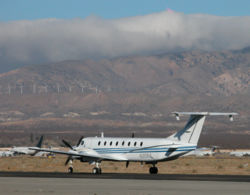 The original design is known simply as the Beechcraft 1900. It features two "airstair" passenger boarding doors: one near the tail of the aircraft much like the smaller King Airs, and a second at the front just behind the cockpit. It has a small cargo door near the tail for access to the baggage compartment, which is behind the passenger compartment. The design was not well-received; two airstairs were redundant on an aircraft holding 19 passengers. Only three airframes were built, with "UA" serial numbers of UA-1, UA-2, and UA-3. UA-1 and UA-2 are stored at a Beechcraft facility in Wichita, Kansas. As of September 2006, UA-3 is in service with Bolivia's Ministry of National Defence in La Paz.

After the original design proved unpopular, Beechcraft eliminated the aft airstair door, retaining the forward airstairs, and installed an enlarged cargo door in the aft section. The changed aircraft was renamed 1900C. Other than the redesigned door layout, the early 1900C's were substantially similar to the original 1900's. These were assigned serial numbers starting with the letters "UB." A total of 74 UB version were built, many of which remain in service.[2]

Aircraft in the UA and UB series employ a bladder-type fuel tank system in the wings. Later 1900C's use a "wet wing" fuel system: entire sections of the wing are sealed off for use as fuel tanks. This design change allowed more fuel to be stored, substantially increasing the 1900C's range. The wet wing 1900Cs were assigned serial numbers beginning with "UC." These aircraft are also referred to as 1900C-1s. The wet wings proved popular, and the UC is the most common version of the low-ceiling 1900, with 174 UC airframes built.[2] 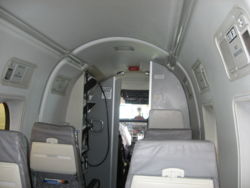 While the 1900C had become a popular regional airliner, Beechcraft undertook a substantial redesign of the aircraft, and in 1991 introduced a new version called the 1900D.

The 1900 and 1900C, like most 19-passenger airliners and business jets, have fairly small passenger cabins, with ceilings so low that passengers cannot walk through the interior without bending forward. The 1900D was designed to remedy this by providing a "stand-up cabin," which would allow most passengers to walk upright. It is the only 19-seat airliner with this feature.[2]

Because the taller passenger cabin adds both weight and drag to the airplane, other elements of the 1900D were also changed. More powerful engines and modified propellers were installed, winglets were added to reduce drag and increase the wings' efficiency, and the tail was made larger in response to the more powerful engines. The cockpit was updated with an Electronic Flight Instrument System (EFIS). The 1900D was certified under the then-new FAR Part 23 "Commuter Category" standards, which had replaced the earlier SFAR 41C. Since the "UD" serial numbers were already in use by the military 1900s, the 1900D airplanes have serial numbers beginning with "UE." The 1900D is the most popular version of the Beechliner, with 438 of the 1900D built.[2]

The King Air ExecLiner was a marketing name for a corporate version of the Beechcraft 1900C.

The recommended fuel is Jet A. The engines are approved for limited operations on other forms of jet fuel and even on aviation-grade gasoline.[6]

The 1900D cruises at about 260 knots true airspeed (300 mph or 480 km/h). Ordinary trip lengths range from 100 to 600 miles (20 minutes to two hours), but with full fuel tanks, the aircraft is capable of flying well in excess of 1,000 nautical miles. Airlines often prefer the 1900 over jet aircraft for shorter routes due to its fuel efficiency, and because trip times are not significantly longer on distances up to 300 miles (480 km).[6]

The airplane is certified to fly up to an altitude of 25,000 feet (7,600 meters) above mean sea level. The cabin is pressurized, and the aircraft is equipped with emergency oxygen masks in the event the cabin loses pressure.[6]

It is designed to operate in most weather conditions, including icing conditions, and it is usually equipped with weather radar to help pilots avoid severe weather.[6]

The aircraft may be equipped with a lavatory, using space otherwise available for passenger seating and cargo storage. Because most flights are less than two hours' duration, most airlines choose the additional seating and cargo space, and forgo the lavatory.[6]

The ICAO designator for the 1900 is B190. This is used in ATC flight plans and pilot reports, as well as for aircraft type identification on ATC radar.

Airlines and other operators 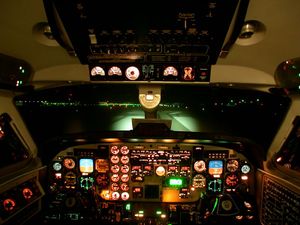 Other airlines operate Beechcraft 1900s in Africa, Latin America and elsewhere around the world, as do many corporate and freight operators.

According to Flight International magazine, 451 1900s remain in airline service as of August, 2006, as follows:

Military and government operators include Egypt, France, the Republic of China ("Taiwan"), the United Arab Emirates, the United Nations, and the United States.[7]