The V-22 Osprey is a joint service, multimission, military tiltrotor aircraft with both a vertical takeoff and landing (VTOL) and short takeoff and landing capability (STOL). It is designed to perform missions like a conventional helicopter with the long-range, high-speed cruise performance of a turboprop aircraft. The initial operators are the U.S. Marine Corps and United States Air Force. The FAA classifies the Osprey as a model of powered lift aircraft. 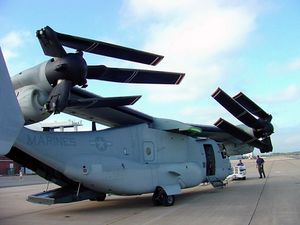 First production Osprey to join the V-22 Navy flight test program since resumption of flight evaluations in May of 2002. Aircraft is shown in compact storage configuration.

The Osprey is the world's first production tiltrotor aircraft, with one three-bladed proprotor, turboprop engine, and transmission nacelle mounted on each wingtip. It typically operates as a helicopter with the nacelles vertical (rotors horizontal) for takeoff and landing. Once airborne, the nacelles rotate forward 90 degrees in as little as 12 seconds for horizontal flight, converting the V-22 to a high-speed, fuel-efficient turboprop airplane. STOL rolling-takeoff and landing capability is achieved by having the nacelles tilted forward up to 45 degrees. For compact storage aboard ship, the V-22's wing rotates to align, front-to-back, with the fuselage. The proprotors also fold in a sequence taking between 90 and 120 seconds.

The V-22 is equipped with a glass cockpit, which incorporates four Multi-Function Displays (MFDs) and one shared Control Display Unit (CDU), allowing the pilots to display a variety of layers, including: digimaps centered or decentered on current position, FLIR imagery, primary flight instruments, navigation (TACAN, VOR, ILS, GPS, INS) and system status. The flight director panel of the Cockpit Management System(CMS) allows for fully-coupled (aka: autopilot) functions which will take the aircraft from forward flight into a 50' hover with no pilot interaction other than programming the system.

The aircraft was originally designed to be pressurized, but the rotating wing (for shipboard stowage) makes it difficult to properly seal the cabin. As a result, pilots and aircrew must wear oxygen masks while flying above 10,000 feet (3,000 m). The V-22 uses an on-board oxygen generating system (OBOGS) which draws compressed outside air from the turbine engines and separates out the oxygen and nitrogen. The nitrogen is used by the fuel cells to fill the ullage with inert gas as the JP-5 is consumed.

The V-22 is a fly-by-wire aircraft with triple redundant flight control systems. With the nacelles straight up in conversion mode (90 degrees), the flight computers command the aircraft to fly like a helicopter, with cyclic forces being applied to a conventional swashplate at the rotor hub. With the nacelles in airplane mode (0 degrees) the flaperons, rudder and elevator fly the aircraft like an airplane. This is a gradual transition which occurs over the entire 96 degree range of the nacelles. The lower the nacelles, the greater effect of the airplane-mode control surfaces. 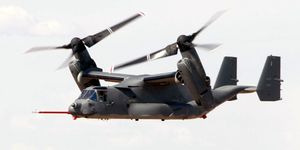 There have been four significant failures during testing:[1]

The V-22 completed its final operational evaluation in June 2005. The evaluation was extremely successful; events included long range deployments, high altitude, desert and shipboard operations. It is claimed that problems identified in all of these mishaps have been addressed by the V-22 program office and advocates of the program are optimistic that the aircraft is mature enough for fleet operations.

The V-22's development processes have been long and controversial. When the development budget, first set at $2.5 billion in 1986, had reached $30 billion in 1988,[citation needed] then-Defense Secretary Dick Cheney zeroed out the budget, but was overruled by Congress. The first flight occurred on March 19, 1989.

Critics claim that the aircraft will never be mature enough for fundamental design flaws and that the V-22 is inherently dangerous because of its flawed side-by-side rotor design. Extensive media coverage of accidents during its development resulted in public questioning of whether the fundamental premise of the aircraft might be fatally flawed.

Additionally, the V-22 squadron's former commander at New River, Lieutenant Colonel Odin Lieberman, reputedly instructed his unit that they needed to falsify maintenance records to make the plane appear more reliable. A crew member's recording included him stating that "We need to lie or manipulate the data, or however you wanna call it".[1]

On September 28 2005, the Pentagon formally approved full-rate production for the V-22. The current plan is to boost production from 11 a year to 24 to 48 a year by 2012. Planned production quantities include 360 for the Marine Corps, 48 for the Navy, 50 for the Air Force. The U.S. Army, originally the lead service for the then-named JVX program, is also a candidate for possible applications.

On December 12 2005, the Pentagon announced that the procurement budget for the Marine Corps V-22s would be reduced by $1.1 billion over the production run. The plans for the Air Force were unaffected.

On July 8 2006, the Pentagon announced plans to buy two new V-22s within the 2007 military budget outlined by President George W. Bush and his cabinet.

Israel has shown interest in the purchase of an undisclosed number of MV-22s, but an official order has not been placed or approved.[2]

The Marine Corps is the lead service in the development of the V-22 Osprey. The Marine Corps variant, the MV-22B, will be an assault transport for troops, equipment and supplies, and will be capable of operating from ships or from expeditionary airfields ashore. 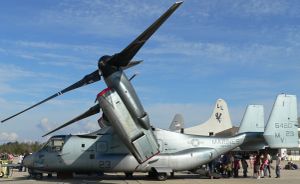 The CV-22, operated by the U.S. Special Operations Command (USSOCOM), will conduct long-range special operations missions, combat rescue, among other special missions. The V-22 Osprey will replace the Marine Corps CH-46E and CH-53D. The U.S. Air Force (which willl operate the USSOCOM aircraft) officially accepted the CV-22 on November 16, 2006 in a ceremony conducted at Hurlburt Field.

The planned, but as yet unfunded, U.S. Navy HV-22 will provide combat search and rescue, delivery and retrieval of special warfare teams along with fleet logistic support transport.

A growth variant being proposed by a joint Bell-Boeing team is a four-rotor version called the Bell Boeing Quad TiltRotor.

On June 3, 2005, the Marine Corps helicopter squadron, HMM-263, stood down to begin the process of transitioning to the MV-22 Osprey. On December 8, 2005, Lieutenant General Amos, commander of the 2nd Marine Expeditionary Force, accepted the delivery of the first fleet of MV-22s, delivered to HMM-263. The unit reactivated March 3, 2006 as the first MV-22 squadron, and was re-designated VMM-263. The Osprey will enter operational service with the Marine Corps in 2007.

In the spring of 2006, a V-22 experienced an uncommanded engine acceleration while ground turning at MCAS New River. Since the aircraft regulates power turbine speed with blade pitch, the reaction caused the aircraft to go airborne with the Torque Control Lever (TCL, or throttle) at idle. It was later found that a mis-wired cannon plug to one of the engine's two Full Authority Digital Engine Controls (FADEC) was the cause. After the aircraft was airborne for approx 2 seconds, and 30 feet in the air, the second FADEC recognized the fault, took over, and made the engine speed match the TCL position—idle. The aircraft came back to the ground and one wing broke off, as it is designed to do, to absorb the impact. There were no serious injuries. Pilots now guard the controls during this point in the startup checklist in case of inadvertent flight, so that if the aircraft goes flying, they can keep it flying (push the TCL forward) until the FADEC switch over, then land it safely.[3] The FADEC software was also modified to decrease the amount of time needed for the switch between the redundant FADEC's - this deficiency correction eliminates the possibility of a similar mishap occurring in the future.

On July 11 2006 a V-22 experienced compressor stalls in its right engine in the middle of its first transatlantic flight to the United Kingdom for the Royal International Air Tattoo and Farnborough Air Show.[4] It had to be diverted to Iceland for maintenance. A week later it was announced that other V-22s had been having compressor surges and stalls and the Navy had launched an investigation into it. [5]

On February 10 2007 the Air Force and Marine Corps temporarily grounded their entire fleet after discovering a glitch in a computer chip that could cause the aircraft to lose control. [6]

Because of the extreme downdraft of the propellers, Marines cannot rappel out the side doors as in the MH-60 series helicopters. Moreover, the engines would block the firing arc of side-mounted machine guns and so none can be fitted in these positions. As in the CH-47 and CH-53 series helicopters, Marines will use the rear ramp to exit and use the extended ramp to mount a machine gun firing out the rear.[5] A chin-mounted turret was initially proposed, but experience gained during Operation Enduring Freedom and the high cost of integration led to the adoption of the ramp mounted M240 machine gun solution.[6][7][8]

Note the CV-22 differs in the following categories[7]