In October 1961, the Army submitted a request for proposals (RFP) for the Light Observation Helicopter (LOH). Bell, along with 12 other manufacturers (including Fairchild-Hiller and Hughes Tool Co. Aircraft Division), entered the competition.[1] Bell submitted their design for Model 206, which was selected out of the design phase of the Navy-run competition by the Army[2] and designated as the YHO-4A.[3][4] 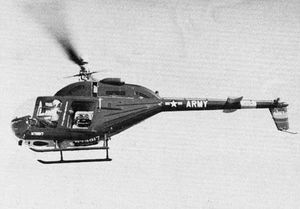 Bell produced five prototype aircraft in 1962 to submit to the army for the test and evaluation phase. During the testing phase, the test pilots complained about the power problems of the aircraft, an issue that apparently knocked it out of the running, because when the winners were announced to progress on to the final selection phase, Bell's YOH-4A wasn't selected.[5] Afterwards, Bell attempted to market the model 206, but it didn't fare well commercially. Bell's market research showed that it was the body design that customers found mostly unpalatable. Bell redesigned the fuselage of the airframe to be more sleek and aesthetic, and reintroduced it as Model 206A JetRanger which was a commercial success.[6]

The 206A, and B are five-seat designs, with two seats in the front and a three seat bench in the back.

The 206L LongRanger is a stretched variant with seating for seven (the LongRanger, stretched a total of 30 inches, adds two rear-facing seats in between the front and rear seats). Since their first delivery in 1975, Bell has produced more than 1,700 L's across all varient types. In 1981 a military version was released, the 206L "TexasRanger". The original 206L utilized a Allison 250-C20B engine, and a series of model upgrades replaced this engine with more powerful versions; the 206L-1 used a 250-C28 and the 206L-3 and 206L-4 used the 250-C30P with 490 shaft horsepower.

In 2007, Bell announced an upgrade program for the 206L-1 and 206L-3 which is designed to modify the aircraft to the 206L-4 configuration; modified aircraft are designated 206L-1+ and 206L-3+. Modifications include strengthened airframe structural components (including a new tailboom), improved transmission, upgraded engine for the L-1, all of which result in a max gross weight increase of 300 pounds and increased performance.[7]

The TwinRanger name dates back to the mid-1980s when Bell first developed the Bell 400 TwinRanger, but it never entered production.[8]

In 1989, Tridair Helicopters' began developing a twin engine conversion of the LongRanger, the Gemini ST. The prototype's first flight was on January 16, 1991, while full FAA certification was awarded in November. Certification covers the conversion of LongRanger 206L-1s, L-3s and L-4s to Gemini ST configuration.[8] In mid-1994 the Gemini ST was certificated as the first Single/Twin aircraft, allowing it to operate either as a single or twin engine aircraft throughout all phases of flight.[8]

The Bell 206LT TwinRanger was a new build production model equivalent to Tridair's Gemini ST, and was based on the 206L-4. Only 13 206LTs were built, the first being delivered in January 1994, and the last in 1997. The TwinRanger was replaced in Bell's line-up by the mostly-new Bell 427.[8]

Derived from the Model 206, the Bell 407 and OH-58D use a newer, 4-bladed, soft, in-plane rigid rotor system which offers improved performance while reducing vibration and noise. The Bell 417 was a follow-on to the 407, but it's development was cancelled.

The JetRanger entered the civilian market in 1967. The Model 206 has since been updated three times, with the 206B "JetRanger II" arriving in 1971 and the 206B-3 "JetRanger III" with its modified tail rotor and more powerful engine in 1977. The basic shape and design remain unchanged since 1967.

The JetRanger is popular with news media for traffic and news reporting. The U.S. Army eventually selected the 206 for use as the OH-58 Kiowa, fulfilling its originally intended role. The United States Navy and Marines use 206 variants known as the TH-57 Sea Ranger. The TH-67 Creek variant is used by the U.S. Army as a trainer for helicopter students. The LongRanger is commonly used as an air ambulance (the standard JetRanger version is too short for this function).

The Model 206 is flown by a single pilot, who sits in the front right seat. In flight plans the ICAO designator for the JetRanger and the LongRanger is B06.

The Bell 206 was the first helicopter to fly around the world and was piloted by Australian Businessman Dick Smith in 1983. During the trip he landed on container ships at sea to refuel.