From PlaneSpottingWorld, for aviation fans everywhere
Jump to:navigation, search
This article is about the single-engine models of the Bell Cobra family. For the twin-engine models, see AH-1 SuperCobra.

The AH-1 Cobra is an attack helicopter manufactured by Bell. It shares a common engine, transmission and rotor system with the older UH-1 Iroquois (nicknamed "Huey"). The AH-1 is also sometimes referred to as the "HueyCobra" or "Snake".

Closely related with the development of the Bell AH-1 is the story of the Bell UH-1 — predecessor of the modern helicopter, icon of the Vietnam War and still one of the most numerous helicopter types in service today.

The UH-1 made the theory of air cavalry practical, as the new tactics called for US forces to be highly mobile across a wide area. Unlike before, they would not stand and fight long battles, and they would not stay and hold positions. Instead, the plan was that the troops carried by fleets of Hueys would range across the country, to fight the enemy at times and places of their own choice.[citation needed]

It soon became clear that the unarmed UH-1 troop helicopters were vulnerable against ground fire from Việt Cộng and NVA troops, particularly as they came down to drop their troops in a landing zone. Without friendly support from artillery or ground forces, the only way to pacify a landing zone was from the air, preferably with a machine that could closely escort the transport helicopters, and loiter over the landing zone as the battle progressed. By 1962 a small number of armed UH-1As were used as escorts, armed with multiple machine guns and rocket mounts.[citation needed]

The massive expansion of American military presence in Vietnam opened a new era of war from the air. The linchpin of US Army tactics were the helicopters, and the protection of those helicopters became a vital role.[citation needed]

Bell had been investigating helicopter gunships since the late 1950s and revealed a mockup of its helicopter gunship concept, named "Iroquois Warrior" in 1962. The design featured a long, slender body with stub wings and a two seat tandem cockpit. It was armed with a chin mounted grenade launcher. A 20 mm belly cannon and munition mount points on the stub wings were also planned.[1]

The U.S. Army was interested in the concept and awarded Bell a proof of concept contract in December 1962. The role of this new helicopter was to protect the troopships and to wield a full combat capability of its own. Bell's first design was built around a modified Model 47, leading to the sleek Model 207 Sioux Scout which first flew in July 1963.[2]

The Sioux Scout had all the key features of a modern helicopter gunship – a tandem cockpit, stub wings for weapons, and a chin-mounted gun turret. After evaluating the Sioux Scout in early 1964, the Army was impressed, but also believed the Sioux Scout was too small, underpowered, unsophisticated, and fragile to be of practical use.[2]

Army's solution to the shortcomings of the Sioux Scout was to launch the Advanced Aerial Fire Support System (AAFSS) competition.[2]

The AAFSS requirement would give birth to the Lockheed AH-56 Cheyenne – a heavy battlefield helicopter that would prove to be over-ambitious, over-complex and over-budget, before being canceled 10 years later in 1972.[2] The Cheyenne program developed future technology and demonstrated some impressive performance, but was never made to work as a functional gunship. It served to underline an important rule of the combat helicopter – survival would be ensured only by the right mix of speed, agility and weapons.

At the same time, despite the Army's preference for the AAFSS – for which Bell Helicopter was not selected to compete – Bell stuck with their own idea of a smaller and lighter gunship.[2] In January 1965 Bell invested $1 million to proceed with a new design.

Mating the proven transmission, rotor system, and the T53 turboshaft engine of the UH-1 with the design philosophy of the Sioux Scout, Bell produced the Model 209.[2] Bell's Model 209 largely resembled its "Iroquois Warrior" mockup.[1]

In Vietnam, events were also advancing in favor of the Model 209. Attacks on US forces were increasing, and by the end of June 1965 there were already 50,000 US ground troops in Vietnam.[2]

1965 was also the deadline for AAFSS selection, but the program was stuck in technical difficulties and political bickering. The U.S. Army needed an interim gunship for Vietnam and it asked five companies to provide a quick solution. Submissions came in for armed variants of the Boeing-Vertol ACH-47A, Kaman Kaman HH-2C Tomahawk, Piasecki 16H Pathfinder, Sikorsky S-61, and the Bell 209.[2]

On 3 September 1965 Bell rolled out the prototype, and four days later it made its maiden flight, only eight months from the go-ahead. In April 1966, the Model 209 won an evaluation against the other rival helicopters. Then the Army signed the first production contract for 110 aircraft.[2]

The Bell 209 demonstrator was used for the next six years to test weapons and fit of equipment. It had been modified to the match AH-1 production standard by the early 1970s. The demonstrator was retired to the Patton Museum at Fort Knox, KY and converted to approximately its original appearance.[1]

The Bell 209 design was modified for production. The retractable skids were replaced by simpler fixed skids. A new wide-blade rotor was featured. For production, a plexiglass canopy replaced the 209's armored glass canopy which was heavy enough to harm performance.[1]

By June 1967, the first AH-1G HueyCobras had been delivered. Originally designated as UH-1H, the "A" for attack designation was soon adopted and when the improved UH-1D became the UH-1H, the HueyCobra became the AH-1G.[2] The AH-1 was initially considered a variant of the H-1 line, resulting in the G series letter.

The AH-1 Cobras were in use by the Army during the Tet offensive in 1968 and through the end of the Vietnam War. Huey Cobras provided fire support for ground forces, escorted transport helicopters and other roles. They also formed "hunter killer" teams by pairing with OH-6A scout helicopters. A team featured one OH-6 flying slow and low to find enemy forces. If the OH-6 drew fire, the Cobra could strike at the then revealed enemy.[1]

During Gulf War of 1990-91, the Cobras and SeaCobras deployed in a support role. The Marines deployed 91 SeaCobras and the Army 140 Cobras. Three AH-1s were lost in accidents during fighting and afterwards.[1] U.S. Cobras were also used in operations throughout the 1990s.[1]

The Pakistan Army has also used the AH-1 as its primary gunship helicopter during the mid-1970s tribal uprising in Pakistan's Baluchistan province, where donated Iranian AH-1J were used against tribal insurgents. The recent insurgencies in the Waziristan regions has seen Pakistani AH-1s seeing action against Taliban & Al Qaeda fighters and their tribal allies, as well as operations against insurgents in another more recent Baluch tribal uprising recently led by armed Bugti and Marri tribesmen under the late Nawab Akbar Khan Bugti and the Balochistan Liberation Army since the mid-2000s.

AH-1 Cobras continue to operate with the US military, by the US Marine Corps notably in the ongoing conflict in Iraq. The US Army phased out the AH-1 during the 1990s and retired the AH-1 from active service in March 1999.[2][3] The Army retired the AH-1 from reserves in September 2001. The retired AH-1s have been passed to other nations and to the USDA Forest Service.[2]

The Israeli Air Force also operates the Cobra as the "Tzefa" (צפע), Hebrew for Viper,[4] with highly favorable reviews.

In 2003, the US Forest Service acquired 25 retired AH-1Fs from the US Army.[2] These have been designated Bell 209 and are being converted into Firewatch Cobras with infared and low light sensors and systems for real time fire monitoring.[5][6] The Florida Department of Forestry has also acquired 3 AH-1Ps from US Army. These are called Bell 209 "Firesnakes" and are equipped to carry a water/fire retardant system.[2]

For AH-1J through AH-1Z and other twin-engine variants, see AH-1 SuperCobra.

Template:Seealso for operators of AH-1J through AH-1Z and other twin-engine variants. 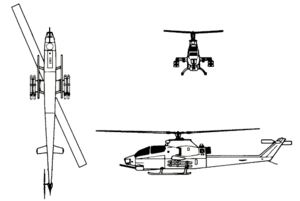